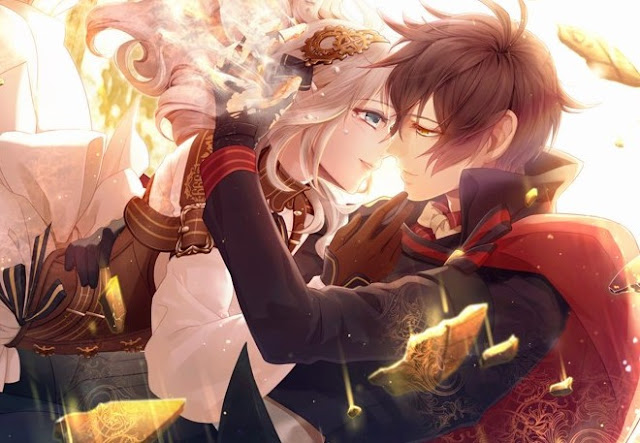 Anyone questioning the wisdom of having so many games being ported to Nintendo Switch, with minimal additions or changes, should perhaps consider that not everyone has had the chance to play the original releases. Case-in-point, for whatever reason I had never played Code: Realize. With it being released “new” on the Switch, I had an excuse to, and now it’s one of my favourite visual novels. This release has been of great value to me.

Related reading: Our review of the original game on the PlayStation Vita

Code: Realize follows the story of a young woman who remembers nothing of her past (yes, amnesia. Forever the beloved trope of visual novels and JRPGs alike). What makes this rather beautiful girl unique, however, is the fact that everything she touches melts away (except, thanks to some kind of alchemy, her clothing), and buried deep into her chest a series of gemstones that roughly form the shape of a heart.

This girl is the daughter of a particularly important genius, though he is lost (and likely in hiding), and she’s being hunted by a shadowy, sinister organisation within the government (some shades of Otomate’s own Hakuoki series there). Thankfully for the girl, a certain gentleman thief by the name of Arsène Lupin rescues her from their clutches at the last moment, and, along with a number of other rather gorgeous men, they all set off to try and get to the bottom of all the mysteries surrounding the girl. 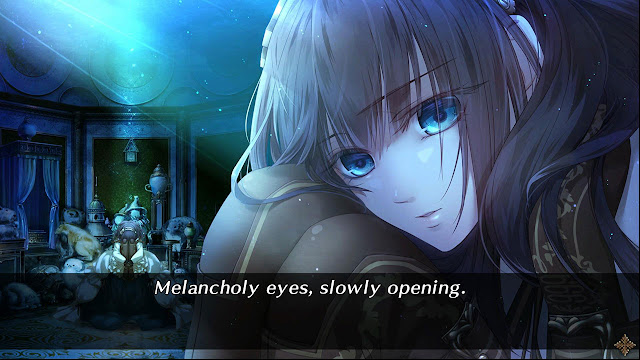 Lupin may or may not be a recognisable name… depending how much literature you read. If he’s not, however, then surely some of these names are: Impey Barbicane, Victor Frankenstein, Armand Van Helsing. Surely you’ve heard of them. One of the most instantly enjoyable things about Code: Realize is that it pulls most of its characters from the world of classical literature, and bases the personalities of each loosely on their literature personas. Lupin is the dashing thief, while Impey is the engineer desperate to get to the moon. Frankenstein is a scientist that likes to dabble with things he probably shouldn’t, and Van Helsing is a deeply knowledgeable demon hunter. Another character, Herlock Sholmès, shows up latter and is a genius detective (incidentally, while the name is an obvious play on Sherlock Holmes and quite clearly designed to circumnavigate rights issues, Herlock is actually a literary character in his own right as a frequent opponent to Lupin in the Maurice Leblanc novels, so that wasn’t Otomate’s doing).

As a literature nerd, this is the kind of character mash-up that amuses me, just as The Avengers or Smash Bros is a lot of fun to comic book fans and Nintendo enthusiasts respectively. The interpretations of these characters are loose enough that Otomate isn’t beholden to them beyond broad personality strokes, but at the same time it’s quite clearly those characters in a romantic mashup that really lets you pick your favourite. They’re all so pretty, too. Otomate visual novels are, arguably, the most beautifully drawn of all, and even in the context of the output of that company, Code: Realize is a particularly beautiful game. Backgrounds are rich in detail, and each of the boys are just perfect. Whenever a romantic key scene comes up, the accompanying art is breathtaking.

We’ve seen in many recent visual novels that there has been a concentrated effort to introduce more movement and energy into them. Technologies such as Live2D has allowed even modest budget visual novels to create detailed, animated character models, and when you get up to what the big end of town is now doing, Spike Chunsoft’s remake of Steins;Gate last year really blurred the boundaries between visual novel and anime. Code: Realize is more modest in that regard. In fact, sitting here now I can’t actually remember if the character models are even animated. I don’t believe they are. Far from being an issue, however, the painterly quality of so much of the art makes the static imagery seem appropriate and the story moves at a rapid enough pace that it never allows the art to become mundane. 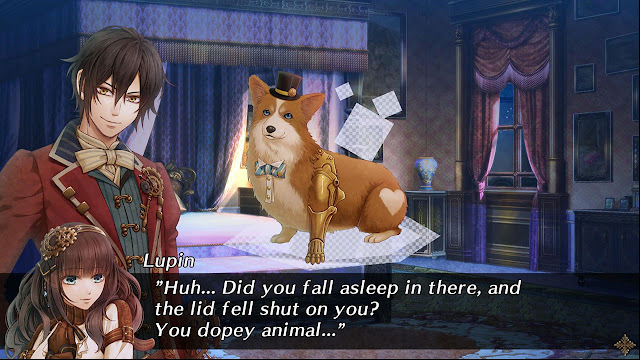 As an otome game, Code: Realize is a fairly traditional application of the genre’s approach to romance. Regardless of which of the men becomes the romantic option, there’s the process whereby there’s a slow build to the inevitable confession (helped that there’s a wall between them thanks to the girl’s unfortunate ability that contact with her would kill the man), and the men are the ones with the power, with the girl being completely reliant upon them to help save her. Otome games such as these behave a little like modern fairy tales in the way they depict the dynamics between men and women, and while this is meant to be romantic, it can be an uncomfortably conservative understanding of romance at times.

Related reading: The ten best visual novels to have on your Nintendo Switch

With that being said, Code: Realize is written beautifully, with the perfect balance between tension and humour, and I wasn’t able to put it down. I became very quickly invested in each of the characters, delighted at each new character reveal, and enjoyed the various twists and turns that the plot took. The protagonist did occasionally stray to the point where she irritated me with her completely over-the-top virginal naivete, but in a game like this you’re not really there for the protagonist. She’s a little profile picture in the bottom corner of the dialogue box for the most part. She’s the narrative frame that shows off the cast of male characters, and both individually, and with regards to the dynamics between them, they were all wonderful. Vaguely (or explicitly) dangerous for one reason or another (because, again, otome), they are also all superhuman in one way or another. Whether it’s Lupin’s endless bag of tricks or Impey’s athletic near-invulnerability, each of the character’s positive attributes have been emphasised to a fun and entertaining extent.

This isn’t a visual novel that’s trying to make you get too philosophical, but Code: Realize has its moments. Labelled a “monster” from the outset, and falling in with rogues and outcasts, the protagonist needs to deal with questions ranging from the concept of self (is she really a monster because of her condition?), through to a running commentary on class (set in an alternate London that makes the different lives the rich and the poor experience explicitly clear). In these themes, too, Otomate’s writers seem to have borrowed from classical literature – there are shades of everything from Frankenstein itself through to Charles Dickens in there, and the various locations (most explicitly London and a certain train) really help to drive that association home. 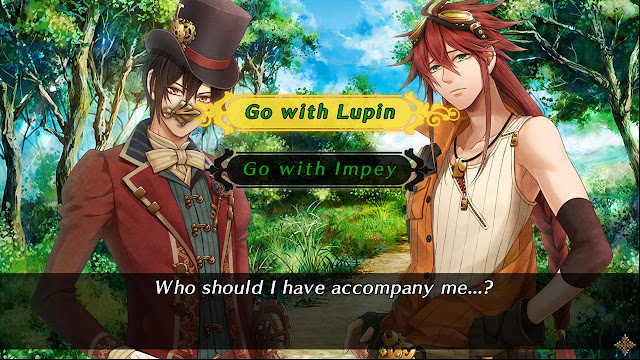 Code: Realize is a beautiful visual novel, with a wonderful concept that is written wonderfully. It’s a little short of the flash-and-bang, which means it’s not the ideal introduction to the entire genre, but once you’re settled in to the genre and can appreciate a visual novel for a quality narrative without needing full animation or “gameplay elements,” it’s hard to look past this one as a key example of the genre done well.

Kingdom Under Fire: The Crusades finally has a release date

Video: Why Warriors (Musou) is so good