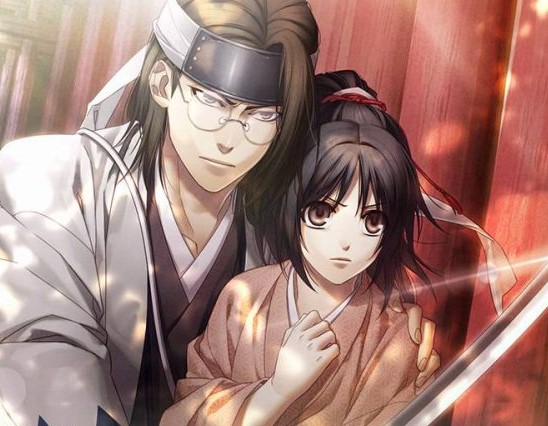 I have played – and loved – a lot of visual novels over the years. There are the VNs that mix with other genres, such as Danganronpa, 999, Eiyuu Senki and Tears to Tiara, and I love them all. Then there are the “true” VNs, where interactivity is kept to an absolute minimum — games like Steins;Gate, which people often challenge as to whether they’re a game at all. I love these games too, and over the years Hakuoki has been my absolute favourite. Never one to let a good game go to waste, Idea Factory has now released the “ultimate” version of a game I’ve played on two other platforms. Hakuoki: Kyoto Winds adds even more to one of the best reading experiences you’ll ever have with a game.

Related reading: Matt’s review of Hakuoki on the Apple iPad.

Hakuoki was first released back in 2008 (no, really), and tells a story of love and adventure in the era of the Shinsengumi. It’s not what you might immediately assume when you think of a Japanese “dating” game, though. Where most dating games that made their way out West back in 2008 featured a dude winning over the affections of bikini-clothed girls simply by existing, Hakuoki flipped things around by casting you as a girl, with a large collection of men to choose, eventually, a romantic partner from. In other words, it’s an otome game. I’m not sure if Hakuoki was the first major otome game to be localised, but it was certainly up there with the pioneers, and its success made localisation outfits realise that there was indeed an audience for these kinds of games.

What I love about otome games is that they tend to be more subtle, elegant, and graceful than the otaku visual novels designed for men. These games tend to be intensely character driven, and are interested in developing deep bonds between the protagonist (you), and the various cast. As such, the characters tend to be quite memorable, and this is certainly the case in Hakuoki. 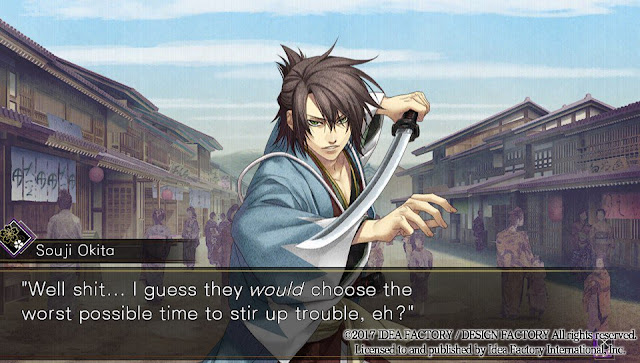 The historical Shinsengumi were, by general agreement, not good people. They were a military police organisation that operated on behalf of the Shogun between 1864 and 1869. In those five years, they developed a fearsome reputation as a society of secret agents, assassins, and operatives, working on behalf of a corrupt government. At its peak, the Kyoto-based organisation was around 300 strong, and it’s not an understatement to say that the city’s population was quite terrified of catching the eye of the blue coats.

It might seem odd, then, that a Japanese game developer would choose this organisation to romanticise for the purposes of its game. Indeed, Idea Factory isn’t the only one; the Shinsengumi are either directly, or in abstract, portrayed in dozens of books, films, anime, manga and games. Aside from the various major personalities of the Sengoku era, and a couple of other individuals through Japan’s very long history, the Shinsengumi are arguably the favourite subject material for Japanese historical fiction, and they are generally romanticised when they are.

Why would that be the case? In basic terms, the people that the Shinsengumi, as an organisation, were contracted to oppose were even worse, and were considered agents of chaos; they were loyal to the emperor of Japan, who at that time was not the political authority. As such, the Shinsengumi are seen as opponents to anarchy and political instability, and as a cultural trait, the Japanese tend to be uncomfortable with uncertainty and disruption. So the Shinsengumi are relatively easy to romanticise as an organisation of tough, even violent, samurai, yet with a fundamental goodness behind them. 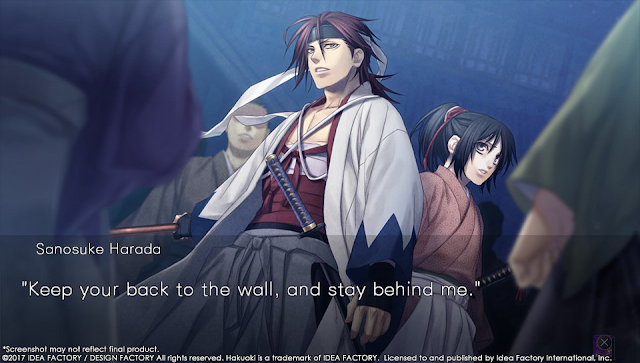 And that brings us to Hakuoki. Hakuoki’s Shinsengumi are based on the real people of the time, although such creative liberties have been taken as to render them almost unrecognisable, beyond their names. Many of the events in the game are also based on what happened in real history; however, you’ll realise within the first hour of play that the main plot is one of pure fantasy. Still, the historical basis and the creative liberties are woven together in an absolutely masterful manner, making for the kind of historical fiction narrative that would easily work as an actual novel, if written that way.

The story itself is one of great adventure. Without giving too much away, you play as a young girl who has travelled to Kyoto in search of her father. Finding herself in some mortal danger before being rescued by the Shinsengumi, our girl accidentally stumbles across a dark secret of the organisation, and is imprisoned because of it – the Shinsengumi simply can’t risk letting her out with that secret. Luckily for our girl, her father is also a person of importance (and an ally) to the group of men, who pledge to help track him down. From there the girl becomes a welcome comrade to the men in the upper leadership roles of the unit, and, naturally, she starts to find some of them quite appealing…

Every character is genuinely likeable, and you can effectively choose which guy to get involved with by making certain narrative choices at a couple of points through the game. This is as interactive as Hakuoki gets, but the decisions you will make tend to be quite difficult ones, simply because you’ll like most of the characters (and therefore options). To make things even more ‘challenging,’ Kyoto Winds gives us another three sexy dudes to flirt it up with. 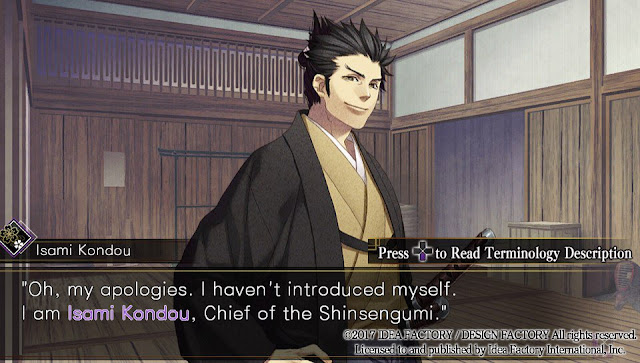 My favourite of the new roster is Souma, a samurai who is not of the Shinsengumi and not a fan of them either. He adds some dramatic tension (which is always good) and further broadens the range of characters you can get involved with. Impressively, Souma, and the other two, are written into the main narrative in such a seamless manner that I got confused at first. Having played the game a couple of times now, I didn’t actually remember these characters and thought I had forgotten the scenes that introduce them into the game; but no, they’d just been stitched in so seamlessly that it felt like they were there the whole time.

Related reading: Amnesia is another must-play VN. Harvard’s review of the PC version.

Hakuoki’s other most delightful feature is its art, which does a beautiful job of showing off classical Kyoto. It’s clear that a lot of research went into designing the costumes and environments you’ll encounter, and while much of the game features mostly static characters talking to one another, there’s a painterly aesthetic that is so very easy on the eyes. Anime game or no, the authenticity that’s on display through Hakuoki is both respectful of the time it came from and a subtle reinforcement of the historical foundations of the game.

I’ve played a lot of visual novels in my time, and a lot of them are favourite games, but I’ve got to say, as a student of Japanese history, and a lover of good storytelling, Hakuoki is right up there with my favourite games ever made. Any game that, after finishing, I can put down and say to myself “if that story was presented to me as a novel I would have loved it just as much,” is a good game, as far as I’m concerned.