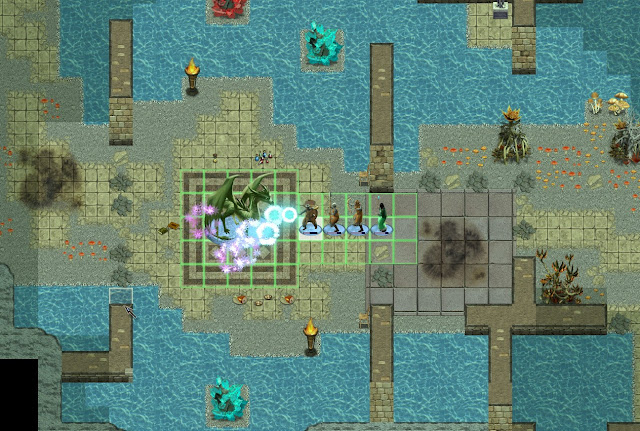 Jeff Vogel, the (mostly) one-man band behind Spiderweb Software, has been around for decades now, as one of the rare survivors in the notoriously challenging indie space. Through this time he has succeeded by sticking to what he does best: ultra low-budget, well-written, deep RPGs, and building a very specific and committed audience around it. As my reviews of past Vogel games show, I fit squarely in the target market, so I was always looking forward to getting hands-on time with Queen’s Wish: The Conqueror. What impressed me about the game is it’s a bold and confident attempt by Vogel to do something genuinely different.

Queen’s Wish still looks like a Spiderweb Software game, with simple sprites and an isometric perspective that calls to mind early SSI Dungeons & Dragons games, or alternatively an indie take on what Baldur’s Gate was, back when it was new. On that initial impression alone, people are going to be immediately galvanised on their level of interest in the game – the vast majority will take one look and be amazed that stuff like this is still being made. The minority – those old enough to be nostalgic for their childhoods – will see an opportunity to re-live a moment of their earlier days. Let’s face it, most of those latter people are existing Spiderweb Software fans. Vogel isn’t trying to stretch to a new audience with Queen’s Wish by targeting them with this new outing.

However, to say that Queen’s Wish is somehow “standard” would be to mischaracterise it, because Vogel’s done a lot to change his own formula up here. Where the bulk of Vogel’s work has been in recreating the Dungeons & Dragons RPG aesthetic and storytelling, Queen’s Wish is more of a city and empire builder, blended with RPG elements. Yes, you heard me right. You’ll still go delving into dungeons and killing enemies through turn-based combat, but you’re also going to have to collect resources, build towns and fortresses, and even at times avoid combat to handle things more diplomatically. 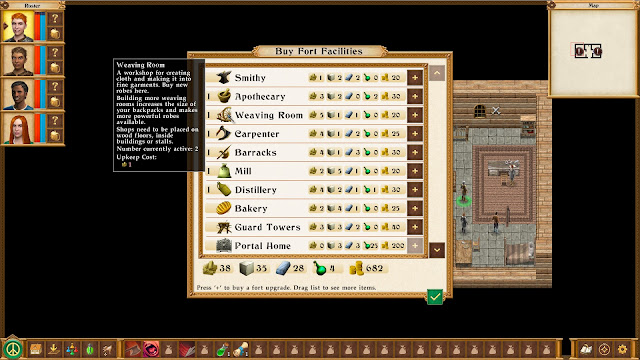 It’s all handled quite nicely too, at least as far as early impressions go. There are oodles of different buildings to construct, and right from the outset you’ve got a lot of freedom around how you complete objectives and deal with the game’s challenges. You play as a princess of a far away kingdom, who has been teleported to a remote backwater of the empire that is falling into lawlessness. It seems that you’ll be able to decide between faithfully doing what you’re told, or rebelling against your mother’s wishes, though I am still far too early into the game to see how that’s balanced out. There are, however, a lot of decisions to make through dialogue trees and the like, so player agency was clearly a priority here.

Speaking of dialogue, the main reason that Vogel has been able to cultivate such a loyal fanbase over the years is that he is so generous with the storytelling. Because the visual engine is so limited, Vogel instead relies on the power of word to set the scene, establish characters, and draw a player in. It’s a rare talent in 2019, where games are rapidly going the Sylvester Stallone route, and even the good narratives are being told in as few words as possible. There’s even an adjustment process in playing one of these games, understanding its slower pacing and resisting the urge to madly click through text without really reading it… and I say that as someone who enjoys visual novels. The size of the blocks of text that Vogel asks you to read is truly something else, as modern video games go.

Settling in and actually allowing yourself to enjoy the writing is worthwhile though, because Vogel really does have a way with words. Playing a Spiderweb Software game is like settling in for a good session of Dungeons & Dragons (as in the pen-and-paper game), with a really good dungeon master spinning a classic fantasy adventure tale. Accompanied with a dry sense of humour as it is, you wouldn’t say that Queen’s Wish was exactly self aware or subversive, but it has fun within its pulpy framework, and a digital page-turner for sure. 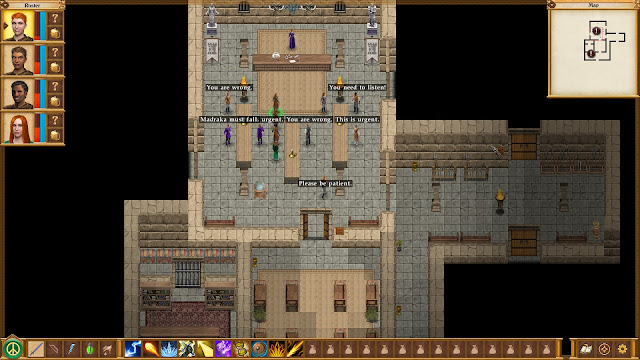 Spiderweb Software games are always generous in terms of scale and length, and from what I can tell, Queen’s Wish will be similarly demanding of time. Niche they might be, but there’s no denying that Vogel is at the very top of his very specific field. The full version of Queen’s Wish launches in around a month, so stay tuned for the full review in the near future.