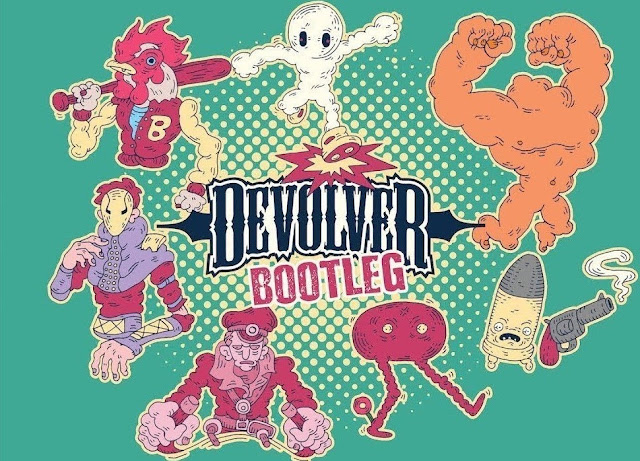 Let’s set the scene. It’s 1993 – the SNES had just hit stores, and that means people are flogging off their old consoles. You chance upon a much-worn NES at a garage sale, along with a peculiar cartridge: “99 Games-in-one”. You’ve never seen this at your local game shop, so you buy it out of sheer curiosity, and as you hand over your spare change the homeowner flashes you a grin filled with malice, as if you’ve just bought a cursed monkey’s paw. Fast forward now. It’s 2002 – you’re browsing Geocities for Game Boy ROMs, trying to repopulate your collection after you accidentally downloaded a Trojan last month and had to wipe your Windows XP PC. Buried within a catalogue of awful movie tie-ins you find an odd title: “Pokemon Diamond and Jade”. That’s not a game you’ve heard of, you think. Now fast forward to June, 2019. Now you know what bootlegs are and what they mean, and Devolver Digital announces that it’s going to bootleg its own games, in a modestly priced anthology titled Devolver Bootleg.

It’s telling of Devolver Digital’s absurdity that when it was announced they would be bootlegging its own games, my initial thought wasn’t “surely that’s not real”, but instead, “of course they would do that.” What we’ve received in the Steam store immediately after the E3 broadcast where it was announced, (on sale for one per cent off, no less – a generous eight Australian cents) are eight de-makes of popular memorable games, rendered on NES-era palettes. As far as I can tell, Gato Roboto developer doinksoft was responsible for each and every one of these games, and the results are… surprisingly good. 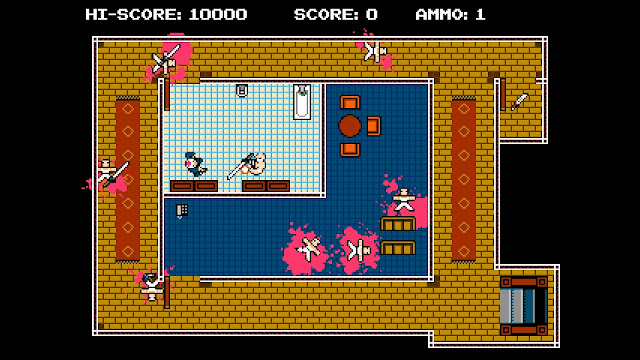 Booting up Devolver Bootleg suggests right away that the developers knew exactly what they were doing. The game boots up with a bland title screen with eight game names rendered in NES font, and no context. It looks exactly like a hacked cartridge would. In the mid 90’s, a common bootleg practice was to retroactively port assets from a game onto a previous-generation console; take a look at the NES Link to the Past or SNES Pokemon Stadium as examples. Doinksoft seem to have seen this as a challenge, and tried to squeeze a few recognisable classics into the standard NES limitations.

This is the approach taken with Hotline Milwaukee and Luftrousers 3, for starters. The former takes the frenetic top-down shooter gameplay of Hotline Miami and recontextualises it into the “historically interesting and relevant Milwaukee” (their words, not mine), and it’s a surprisingly functional romp through a 8-bit, D-pad-and-2-face-buttons rendition of Dennaton Games’ original. Luftrousers 3 is similar fare, although being forced to aim in your direction of movement hampers the game’s playability a lot more. Whereas the original Luftrausers was a chaotic skill based game of risk and reward, Luftrousers 3 is more a test of patience, asking the player to weave through bullets until they can finally attrition their enemies to smithereens.

Other games see Devolver mainstays remixed with NES classics to surreal effect. Ape Out Jr. is exactly what it sounds like on the tin – the wanton destruction of Ape Out mixed with the vine-swinging action of Donkey Kong Jr. The recreation of the latter game is remarkably accurate – the jump physics, game pacing and level design feel very authentic. The same can be said for Enter the Gun Dungeon, which takes cues from The Legend of Zelda and The Mysterious Murasame Castle, pitting the player against ever growing gauntlets of enemies. 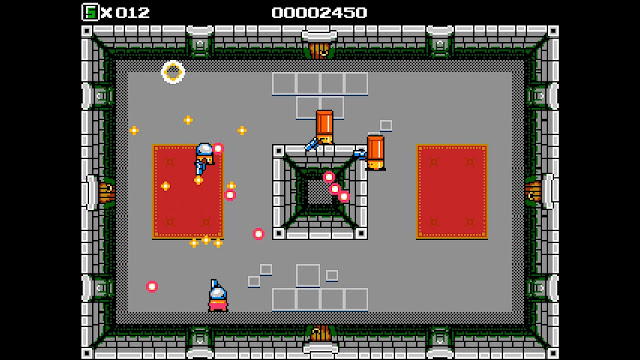 Other games are fundamental misunderstandings of their source material. Shootyboots parodies Downwell and its downward-falling gameplay, but instead the player character lives in a giant single boot, and so cannot move except by sack-race-jumping. The controls are broken enough that the game feels different and is also, more importantly, legally distinct. Cat Game (actually Catsylvania), a bootleg of doinksoft’s own Gato Roboto, which puts cats into the “Vania” side of the Metroidvania genre, but further screws it up by emulating the very linear NES Castlevania. They even misspell the cat’s name as Keekee rather than Kiki.

There are also two multiplayer games if you’re feeling social – a basketball game based on Pikuniku (misspelt as PikuBiku in Devolver Bootleg) that’s decently fun due to how silly the matches can get, and a bare-bones fighting game named Absolver which turns out to really be “Super Absolver Mini: Turbo Fighting Championship”, and bears no similarity otherwise to the real Absolver. These two are fun distractions if you happen to have someone next to you, but they’re not something to base a session upon, in case that’s what you were hoping for.

Nearly all the games are artificially lengthened in the classic NES way – a successful run will take you somewhere between 15 – 30 minutes, but for the sake of replayability each game is made blisteringly difficult, so that only masters have any chance of seeing the credits roll. Enter the Gun Dungeon, Hotline Milwaukee and Ape Out Jr. are the most playable in my opinion, and work fairly well as arcade titles in their own right. 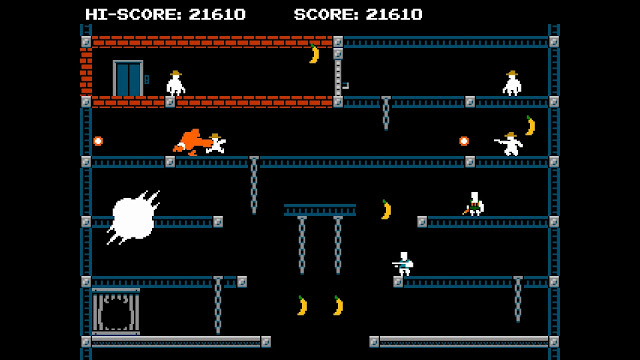 Doinksoft have been relatively merciful however – each of these games is fairly playable as it is, and is well designed enough to carry your attention. You’ll get a good 4 – 5 hours out of the whole package, and perhaps even more if you decide to master these bootlegged aberrations rather than set your skills to the actual games they’re parodying. I would say that the package lacks replay value, but then I’d be criticising a game which intentionally set out to be bad, and that just seems silly.

What I would love to know more about, though, is the story behind how this collection came to light. Did doinksoft make this on their own, or did they have help from each game’s original developers? Or, alternatively, do the original games’ developers even know they were going to have their IP bootlegged? I definitely feel that doinksoft had a lot of fun with the creative liberties that the team took – surely getting the brief to make slightly-worse versions of some classic Devolver games would have been a blast. In the end, the team managed to bake a few fantastic jokes into these games too, which I won’t spoil for the sake of surprise, but I did have my fair share of laughs when I saw them.

But is Devolver Bootleg actually worth buying? Well, honestly, I would say spend your money on any of the eight original games parodied in this anthology, before you consider picking this up. While the games themselves are functional and worth a chuckle, the best experience relies on the player being familiar with the source material. On the other hand, the package functions as a decent, if unorthodox, marketing campaign for parodied games. They definitely had me thinking – if the deliberately janky parodies are this fun, how good must the originals be? In that regard, this anthology is a lot more successful, considering I’m downloading Pikuniku as I write this. You win this round, Devolver.