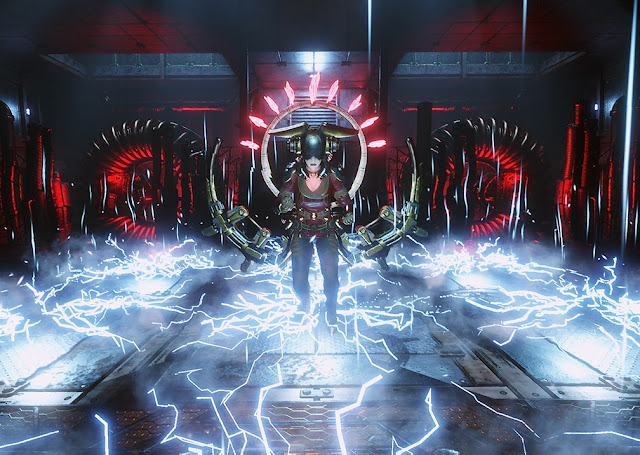 Steampunk isn’t just an aesthetic. Or, at least, it shouldn’t be. Without the “punk” running through its theme and design, all “Steampunk” is, is an attempt to cynically cash in on a popular alternative culture and ideology, and far, far too many “Steampunk” games feel incredibly hollow as a result (and Cyberpunk is even worse). Vaporum is good fun, but also, sadly, an example of what happens when so little is done with the aesthetic.

In just about every way, Vaporum is a stock standard western dungeon crawler. That’s not inherently a bad thing – from Might & Magic and the early era of Wizardry, through to modern examples like Legend of Grimrock, and The Keep, it’s rare that I don’t find myself enjoying a good old ‘crawl. There’s something beautifully uncomplicated in scaling up (or down) a dungeon, one level at a time, and testing yourself against increasingly powerful monsters within the confines of tight, deadly corridors. There’s no need for a grand, world-shattering narrative arc, continents to traverse, and cities to explore. The self-contained gauntlet of horrors is in itself more than enough. The elegance and purity of the challenge mirrors Bruce Lee’s final masterpiece, Game of Death. Just as Lee’s hero in Game of Death isn’t motivated by reward in ascending the layers of the pagoda in that film, so too the dungeon crawler isn’t usually about reward. It’s the test itself where the appeal lies.

In Vaporum you play as a single intrepid explorer, who can choose between a couple of different “suits”, and each of those give him access to a different range of skills and abilities (alternate classes in other RPGs). Those suits, the game’s various steam-powered enemies, and the environments themselves, are all carefully modelled after the Steampunk aesthetic, with all the shifting gears and hissing whistles that the aesthetic entails. It’s an intriguing environment and set of enemies, and as much fun as the “pure” dungeon crawler is, it’s hard not to wish more was done with the setting. It’s great that the developers decided to call the magical powers that most RPGs would feature “gadgets” and “experience points” are now “fumium”. I don’t even know what fumium is, but it sounds appropriately Steampunk. Does any of this function differently to what you’ve seen in other dungeon crawlers, though? Of course not. It’s pure smoke and mirrors in form and function, and so, while the game might claim to be “Steampunk”, in action it’s hard to see where the “punk” comes from.

Vaporum doesn’t have much of an explicit narrative, either. That’s okay, though. The dungeon crawler has rarely been used to provide players with much of an explicit narrative, but through titles like Hyakki Castle we’ve seen that it’s possible to do a lot of creative environmental and lore storytelling for people willing to dig into it. Vaporum’s problem is that it never quite grasps the nuances of non-linear storytelling, relying heavily on found tapes and notes along the way, which are thoroughly mundane in the tales they weave. Sadly for Vaporioum, the dark, hollow metallic aesthetic, divorced of an interesting context and world building, becomes draining. Again, it is frustrating, because the snippets that are in there tend to be well delivered and performed, and the team clearly knew what it was doing. Perhaps a lack of experience held them back from being willing to break with the conventions of the dungeon crawler in order to properly deliver the Steampunk theme.

There’s a good blend of action and puzzle solving in Vaporum. The puzzle solving is quite standard for the genre, though – it largely involves finding keys to unlock doors, or figuring out how to slip past some kind of trap. The lack of creativity in those puzzles is, again, a little disappointing for how safe it sticks to convention, but on the other hand there is a wash of nostalgia with regards to this particular direction, and as a genre veteran I was able to enjoy it on that level.

It’s in the combat system where Vaproum finds its creative teeth, and it was the combat that largely kept me plowing forward. The traditional approach to dungeon crawling combat (attack, then retreat when your opponent goes through its attack animation, and then stride forward to get your strike in again), is present in Vaporum, but there’s a rich variety of enemies and their attack patterns, which makes each new enemy a learning process. So many other dungeon crawlers (including my beloved Hyakki Castle) make the attack patterns far too similar and predictable, which can lead to the combat being a drag over the longer term. Vaporum does a great job of making each new enemy that shows up appear intimidating, as you won’t be sure just what to expect from them. 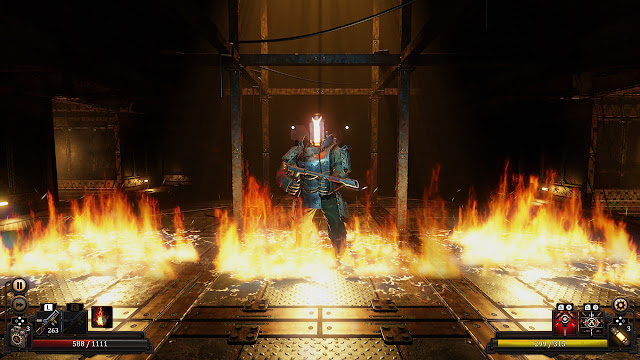 Mechanically, Vaporum works like most western dungeon crawlers – where the Japanese take on the genre features turn based combat, here it all plays out in real time. That’s where the second delightful break from tradition comes in; Vaporum features the ability to stop time, at any time. While you’ve got this turned on, you can still move and act, but time will only flow at a pace that is in line with your own activities. In other words, you can carefully plan out an attack for as long as you like. It’s not entirely required to make use of this system, and I get the sense that it would be possible to play Vaporum as a straight real-time dungeon crawler, but having the ability to pause and approach the action more strategically is a great feature, both in terms of accessibility, and also in allowing the developers to indulge in additional complexity, which wouldn’t have gone down so well in a standard ‘crawler.

Vaporum is complex, mechanically, and it really requires the use of every single button and input available on the Switch to make it work. While you could argue that it should have been possible to pare the complexity and inputs down a little, thanks to the pause mechanic it’s not the end of the world, as you’ve got plenty of time to figure out what buttons you want to be pressing next, and the benefit of being able to plan out a complex series of moves ahead of time is so rewarding, especially when you can make good use of the mechanic to cruise through what is otherwise a pretty challenging game.

No, Vaporum isn’t really the “Bioshock dungeon crawl” that the marketing material claims, because Bioshock was a generally intelligent series that told complex enough stories that the “Steampunk” tagline was earned. Vaporum isn’t genuine Steampunk. Rather, it’s a fairly by-the-numbers dungeon crawl that borrows the Steampunk aesthetic, and offers some genuinely clever twists, as far as combat goes. There aren’t too many dungeon crawlers on the Switch, and even within that category Vaporum is flat enough that it doesn’t come out on top, but it’s a pleasurable way to bust a few hours on a weekend nonetheless.

There’s a Neptunia… SHMUP… on the way