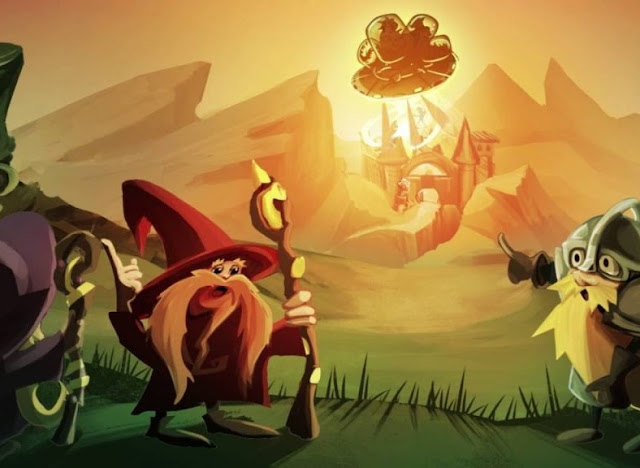 Dungeons and Aliens, developed by Kool2Play and published by Arts Alliance, purports to be a defence game. Which is accurate enough – you are defending yourself from an onslaught of alien invaders, using light strategy elements to succeed. Starting its original life as a phone game with touch controls and finding its way on the Switch, Dungeons and Aliens is a serviceable time waster but sorely lacking in most other affairs. If it does catch your attention, it’ll certainly be because of the compulsive mechanics tailor-made to persuade players to keep playing.

I don’t like to fill my reviews with negatives, but there’s not much I can say about Dungeons and Aliens that portrays it in a good light. My main positive is that the game’s art is fairly well done – I particularly love the goofy-looking aliens which are full of pep and character. There is no real visual connection between the various enemy designs, which to me heightens the charm – each new set of enemies are more unexpected and whimsical than the last.

The wizards doing the defending are more drab; each is colour coded to represent the element of magic they wield, and you’ll never actually look at them anyway since your eyes will be fixated on the aliens sprawling in from the right side of the stage. Not that the art style holds any benefits to the gameplay or story – it’s just nice to look at, is all. 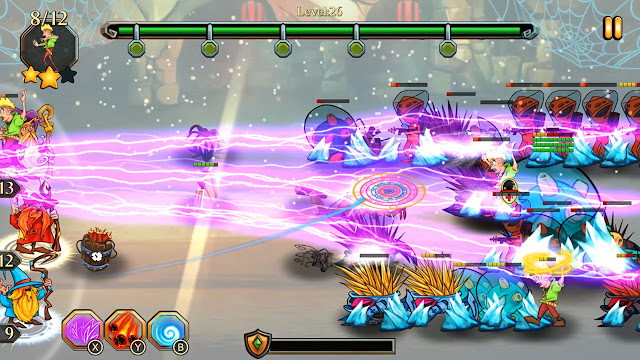 The story is somehow thinner than many excuse plots from the NES era – the gist is that there are aliens invading a world and three wizards are intent on putting a stop to that. That’s it – there’s no plot, characterisation or backstory. It’s a missed opportunity that there was no exposition between levels or worlds, too.

This would all be forgivable if the gameplay was top notch, but unfortunately I caught a snag on a few odd design choices that hamper the overall experience. The core gameplay loop is similar to games like Plants Vs. Zombies or Has-Been Heroes: enemies swarm in lanes from right to left, and you’ve got to juggle a variety of basic and special attacks to prevent them from hitting your guys on the left side. Dungeons and Aliens offers an autoattack which is aimed with the directional stick or touch controls, as well as large AoE spells cast with the face buttons or swipe gestures.

If you remember the original Final Fantasy – the NES one – spell casts were not determined by a pool of Mana Points, but rather from individual “casts”. Once you’ve cast Fire so many times, you’re done – and there’s no way to restore your spells until you’ve restocked at a town. This system, cribbed from Dungeons & Dragons, proved to be not as effective at computer JRPGs: it effectively made spells consumables and players didn’t want to use them, which is why every re-release of Final Fantasy now has a conventional mana system, allowing you to continue casting the same spell for as long as you have mana points. 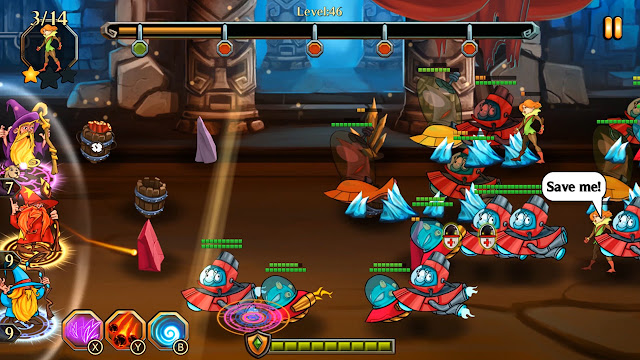 Somehow Kool2Play didn’t get the memo because in Dungeons and Aliens, you need to purchase every individual cast of a special move. Levels are difficult enough that you’d be tempted to use specials whenever possible, but when each spell cast costs 50-100 gold and you’re only earning ~300 for each level completion, you’re going to want to be stingier. The problem is exacerbated because upgrades to your autoattacks and your spells – which are essential for surviving the later levels – also cost you gold. You can replay completed levels to your heart’s abandon, but you’d better do them without any special moves. This is so that you can rack up the money that’s a prerequisite for having any chance at winning as the game gets harder.

This sounds terrible when written out but in-game, it’s surprisingly forgettable. As I mentioned, Dungeons and Aliens is compulsive. It rewards players with shiny treasure chests and lots of frequent, small rewards. It gives the player increments in avatar strength at a trickle, so that you feel like you’re making progress, even though many of the game’s systems are really impediments. It’s a game which will easily eat up your time, and leave you feeling dissatisfied after – more than fitting for a mobile game designed to hawk microtransactions, which was then repackaged into a Switch game with the least possible effort.

With that, there’s really not much redeeming about Dungeons and Aliens. It squanders a potentially interesting Tolkien-ish Fantasy vs. B-Movie Alien plot, and barely gets its skinner-box-gameplay-loop out the door. I could only recommend this game if you’re looking for something to fidget your fingers with – but aside from that, nearly anything else on the Switch would be a better choice.