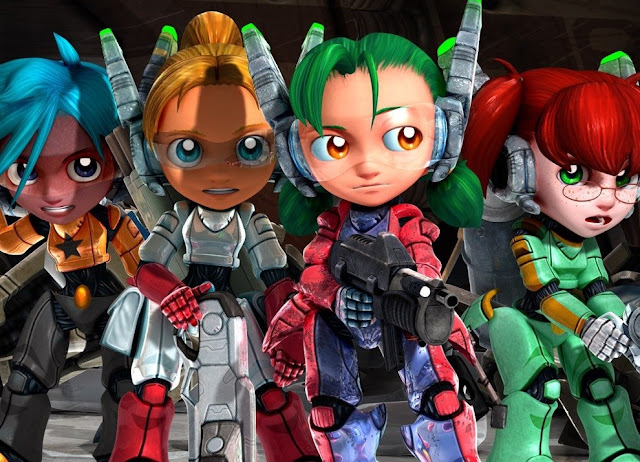 This will surprise a fair few people, but I’m actually quite a big fan of dual stick shooters. From right back with Robotron 2084, right through to the likes of Geometry Wars, dual stick shooters have been my go-to for extreme twitch action. I’m terrible at SHMUPS and the like, but give me a good dual stick shooter and I’m in my element.

I hadn’t played Assault Android Cactus until its release on Nintendo Switch, which is a double whammy of “how did you miss this one?!?” Firstly, it’s a dual stick shooter, and every time it has been released on a new platform I had heard nothing but praise for it. Secondly, it’s an Aussie-developed game, and I do like supporting my local game makers wherever possible. I don’t really have an excuse for missing the game, but I’ve played it now, and I’m glad I have, because it doesn’t disappoint on any level.

More akin to Robotron than some of the more recent efforts to meld the dual stick shooter with more cerebral genres – such as Alienation’s blend of RPG and dual stick shooter – Assault Android Cactus wastes no time whatsoever in pumping the action right up to 11. Within the first couple of levels the screen becomes filled with a manic energy as enemy robots come from every which angle, and the levels themselves constantly shift to keep you on your toes, and keep the action dynamic. 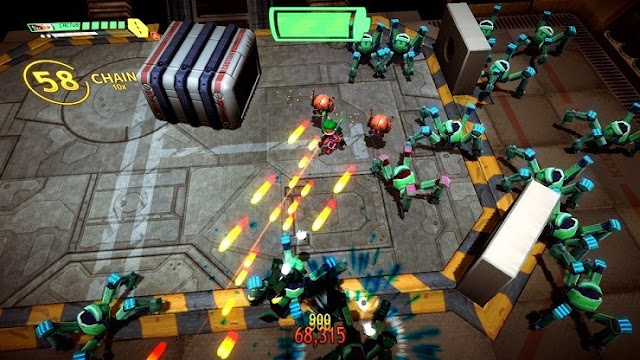 Actually finishing levels is quite easy. You pick your hero for the level (from a decent number, each with their own unique weapons), and simply need to preserve their “energy” – a battery-shaped health bar, from depleting, until you can get to the end. Energy leaks at a consistent rate, and you’ll lose more if you actually get hit by an enemy. On the plus side, there’s more than enough health restores dropped to compensate. So, yes,  finishing levels is easy. Finishing levels and getting a good score is quite another thing. Every level has a leaderboard, encouraging you to chase the all-elusive S-rankings, and those top scores require that you take down enemies with such extreme efficiency that you don’t take a single hit. Doing that is almost painfully hard. And yet, because levels are over in just a few short minutes, there’s such a temptation to give that new top score just one more crack. It’s arcade game structure at its very finest.

Assault Android Cactus looks like a cheesy morning cartoon, and that’s reinforced by the snippets that pass for a narrative. It’s not like narrative or the visual engine is necessarily important to the dual-stick shooter, of course; one of my favourite examples of the genre is the incredibly modest Dracula – Undead Awakening. All that’s important is being able to render huge swarms of enemies on the screen at once, and then make it satisfying and entertaining to dispatch them. Assault Android Cactus does that, but I also wasn’t being critical of its visual engine or storytelling by any means. It’s simple, goofy, and hugely enjoyable, while also avoiding being overindulgent to the point that it shifts focus away from the game. The developer’s done just enough to make you like the characters without necessarily dwelling on them.

Structurally the game offers a largely linear set of levels. Your character is plonked down on a world map, much like in Mario titles, with levels being little nodes on the map. There’s not much to do from this world map aside from move from one combat node to the next, and the developers recognise that this isn’t an overly interesting thing to wander around, because after completing a level you have the option of leaping straight into the next one without dropping back to the map. Of course, the flip side to this is that there’s probably not much the developers could have done without fundamentally changing the spirit of the game anyway; one of the weaknesses of the dual stick shooter is that it’s a fundamentally limited genre. 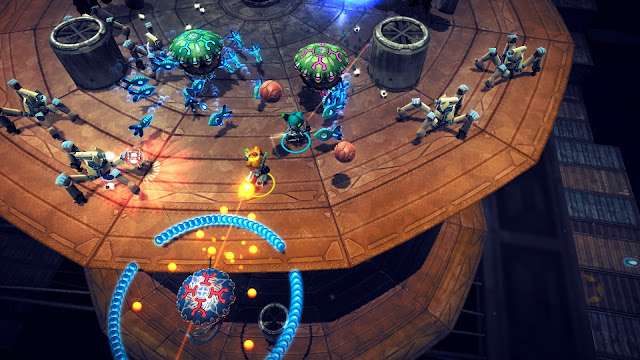 For me, the real value in Assault Android Cactus is the endless mode, where, as the name suggests, you’re dropped into the middle of an arena, with increasingly powerful enemies coming at you until eventually you can’t handle the onslaught any further. The difficulty picks up quickly, so these matches are still brief enough to be ideal commute fodder, but there’s such a thrill in being able to push through to a wave that you hadn’t previously been able to.

Assault Android Cactus’ greatest weakness is that it defines itself as an “arcade dual stick shooter” in such a traditional fashion that it’s limited by that. The game’s greatest strength is that it is so slick, smooth, and energetic that its limitations don’t matter in the slightest. This is one cracking game.