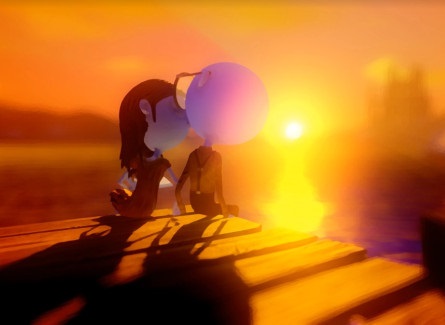 But sometimes games license music, or use popular artists for some of the soundtrack and sometimes, I get introduced to new favourite music artists from those licenses or performances. And by “new favourite artists” I do mean that I’ve moseyed on over to Apple Music and added the entire catalogue to my play list. Just for the heck of it, I thought I’d share a couple of notable examples of this happening to me over the years.

Despite being a real child of the ’80s and ’90s, and loving the music of those decades (yes, really, and if you’ve liked any chart topping music track in the decade you’ve got no basis on looking down your nose at those of us that remember music from back then), I had somehow never heard of The Human League. It’s not that I wasn’t aware of the music – everyone knows You Don’t Want Me. But I didn’t actually track the band itself until I played Lollipop Chainsaw. Goichi Suda’s grindhouse masterpiece was made all the more incredible for its bombastic use of licensed music, much of which was from “my” era, and in many cases the licensed tracks were used to emphasise scenic highlights within the game.


Empire State Human, for example, played during my favourite scene in the whole game; a neon-drenched old arcade game homage that was the perfect marriage of Suda-san’s distinctive sense of surrealism, his love of playing on nostalgia, and his ability to find a killer bit of music to accompany every game situation. I am now a genuine fan of The Human League and actually recognise the band behind the music whenever I hear it pop on.

Life Is Strange – To All Of You

There has never been an introduction sequence to a game that has captivated me within the game as quickly, or effectively, as Dontnod’s use of To All Of You in Life Is Strange. Here we have a game in which you’re playing a girl who’s trying to grapple with all the nonsense that comes with being a teenager, and Syd Matter’s beautifully folksy track, playing through Max’s earphones, as she walks down a hall in the school, and watches all the dramas going on around her, is tonally so spot on that it remains the most memorable scene in a game that is near-on perfection from start to finish (putting aside that ending).


Even better, from my perspective, I did not know about Syd Matters before playing this game. Immediately after playing the introduction of Life Is Strange I got Googling, and now? Well, now, Ghost Days is one of my most played albums according to my Apple Music account.

Last Day Of June is a really interesting one, because it’s not just that the game features the music of Steven Wilson… the entire game is actually based on this one particular song. Think about that – Wilson’s music is so compelling, so lyrical, and so dense in the storytelling gravitas that is was possible to spin it into a dedicated game all of its own. An amazing game, I must add. I haven’t reviewed it for DDNet, but it’s a solid 5/5 effort. Effortlessly. It had be in tears.


As with Syd Matters, above, I had no idea that Steven Wilson even existed until playing Last Day Of June, and looking into its background. And, just like Syd Matters, I have now listened through all of Wilson’s library. You’ve got to be in a specific mood for this guy because… well, he’s more stimulating to the intellect than the emotions (aside from his ability to crush your soul a little more with each piece of music, that is). But it’s powerful, deep, intense stuff, and again fits in neatly with the alternative rock and indie music that has always been my staple. Placebo, New Order, Muse and Nick Cave were my beats as a kid, just in case you haven’t guessed that yet.

This one sounds a little like cheating, I know. It’s a rhythm game, so it’s not surprising that I’d find music that I like on it. But here’s the thing; I legitimately had no idea what Hatsune Miku was before playing my first Project Diva game. And now you only need to look at my collection of Miku figures, rare CDs, and everything else to know I’m a big fan.


I think the moment that my love of Miku moved past the games into the entire music culture around her was when I discovered Evils Kingdom, which is essentially a narrative music album by populat producer, mothy, which uses the vocaloids in a dramatic, near operatic fashion, and it was that point that I realised that this stuff could all be used for not just entertaiAning pop music and fun rhythm games, but also to weave stories, create art, and have impact. And I think a big reason I saw it that way was because I am a huge, huge fan of Nick Cave’s The Carny as music narrative, and Evils Kingdom is oddly like a Japanese take on that. Sadly not music music from this album is even in the Miku games, but without those games I would never have discovered all the amazing music that isn’t in the games.

There’s one thing you can be sure of with Gust games; you’re going to get an amazing soundtrack. One thing I didn’t expect going into Ar No Surge for the first time, however, was to discover a new favourite artist. A couple of key tracks were performed by a Russian artist who made much of her career in Japan; a woman by the name of Origa. Tragically she died not long after recording the music for this game (making the sorrowful tone of the music really hit home when you hear it now).


After figuring out the lyricist behind the Ar No Surge tracks, I went and researched up the artist, and now I own physical copies of quite a few of Origa’s albums. She has the perfect voice, if you ask me, with a rich, powerful, classically-trained tone. When that kind of voice is paired up with electronic and pop rhythms, as much of Origa’s work is, it makes for one very beautiful listening experience. The world lost Origa too young.

Generally, when the music in a game inspires me to go find a new band that I really like, chances are I’ll think the game itself is brilliant – and that’s certainly the case with the all above. That stands to reason, of course; the music in a game needs to carry a great deal of its emotional resonance, and act as a complement to the narrative, so if I love the music I must therefore have an emotional connection to the game and story.

We’re going to see more of this; the cost of making games continues to grow, and with that, the cost of bringing music talent in to boost the production credibility of the game through artists known outside of games will become a smaller percentage of the overall cost. Additionally, more and more music artists are showing interest in how their music can work with games, and will be interested in working with game developers.

It’s going to become a great way to discover new favourite artists for people who, like me, just haven’t got the time to go out and research this stuff (or the inclination to listen to what passes for popular music now for the occasional diamond in the rough).