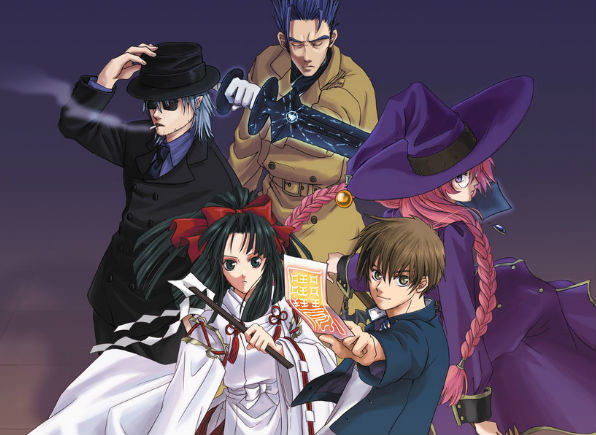 Thanks to publishers like Degica, Steam is quickly becoming a bastion of classic bullet hell shoot ‘em ups, and this a wonderful thing. It’s a niche genre, but also one with a long and storied history spanning many different consoles and generations. Having as much of that history as possible together in one place is an admirable goal, both in terms of historical preservation and for ready availability for newcomers. It’s only in the last year or so that I’ve started to get into shoot ‘em ups, and I owe it entirely to their proliferation on Steam.

Castle of Shikigami is the latest game to join that ever-growing line-up. It was originally released for arcade in 2001, and despite being ported to a number of different platforms, it’s one of the lesser-known bullet hells. In a bizarre decision, the early console ports were localised as “Mobile Light Force 2” despite having no connection to Mobile Light Force, and it was slapped with generic sci-fi cover art despite being a supernatural fantasy game. With the Steam release, Castle of Shikigami finally has an English release under its actual title and with relevant promotional art – including characters who are actually in the game!

Related reading: For a newer bullet hell, and one that better caters to newcomers, check out Clark’s review of Bullet Soul.

This is definitely one of the most creative shoot ‘em ups I’ve played. There are six characters to choose from, and as in most bullet hells, each has their own shot pattern. However, this is only half their arsenal – each character also has a unique supernatural ability, like summoning a ghost that automatically attacks nearby enemies or a sword that rotates around the player’s character. The special move stays in effect as long as you hold down the button, and comes with the added bonus of slowing your movement – a vital ability for navigating the barrage of bullets that the game throws at you. On top of that, you’ll automatically collect score medals for enemies killed with a special attack, while those killed by bullets have to be manually picked up by flying over them, which almost always results in missing some. 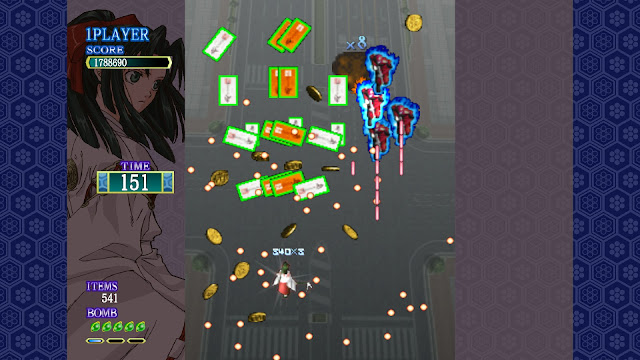 As useful and powerful as these abilities are, though, they have their downsides. Though specifics vary from character to character, they typically have short range and aren’t great at dealing with large groups of enemies. All of them require a moment or two to start up, and you can’t use your regular shots and special abilities at the same time. This creates an interesting dynamic where you have to juggle the pros and cons of your two attacks as the situation demands. Bullets are good for clearing distant enemies or taking out big swathes of weak foes; special attacks are usually good for taking out bigger enemies or cutting a path through a horde. The scoring system means you want to use special attacks as much as possible, but using them to the exclusion of regular shots is a shortcut to the grave.

This all adds up to a bullet hell with a lot of depth and a lot of room for creative problem solving. That’s rounded out with a scoring system that encourages “grazing” enemy bullets – that is, flying as close to them as possible without actually touching them – with score multipliers, and an attack level that increases as you collect medals but falls when you get hit. It’s a deep, complex game.

It’s also a tricky one, even by bullet hell standards. Even playing on the easiest difficulty setting, the screen is flooded with projectiles from the first instant and never lets up. Most other shooters at least let the first level ease you in before ramping up the difficulty, but there’s none of that here – it starts hard and gets harder, but without the steep incline you often see, and I think that’s to its detriment. Bullet hells are notorious for their difficulty, but in the best ones, fiendish as they are, there’s a carefully tuned difficulty curve. 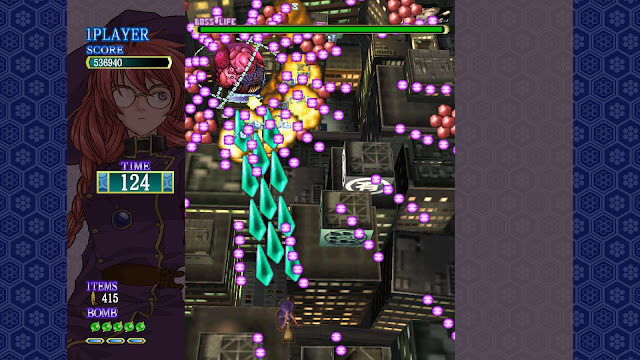 That also applies to the bullet patterns that are thrown at you, which come across as somewhat haphazard. They’re not random, but they feel that way – like a giant field of bullets rather than a danmaku maze, so you’re not solving problems and planning your moves so much as just reacting to whatever’s in front of you and finding the next gap. These games are all about practice and learning the levels like the back of your hand, but in Castle of Shikigami that’s a bigger ask and a less rewarding one because it feels like you’re memorising scribbles on a page rather than the meticulous calligraphy of the shmup giants. The bosses have more of that crafted, bullet maze feel, but everything in between them struck me as filler rather than part of the overall design of a level.

Castle of Shikigami also falls short in terms of features and presentation. It’s missing the art galleries and practice modes that are present in most of the earlier ports, leaving the package filling a bit barebones. Regardless of your display settings, the game itself renders at the original resolution and then gets stretched out to the height of your screen, leaving you with a fuzzy, blurring mess that. I’m not normally one to get concerned about such things, but this game actually hurt my eyes and I could only play in short bursts – finish one level, pause and go do something else for a while, finish the next, and so it went on.

All that said, I’m still glad that we’ve got Castle of Shikigami on Steam; flawed as it is, it’s a fun, creative shoot ‘em up and an important part of the genre’s history. Here’s hoping that its two sequels are also in the pipeline, because by most accounts, they’re a huge improvement on the good groundwork set down by this game.