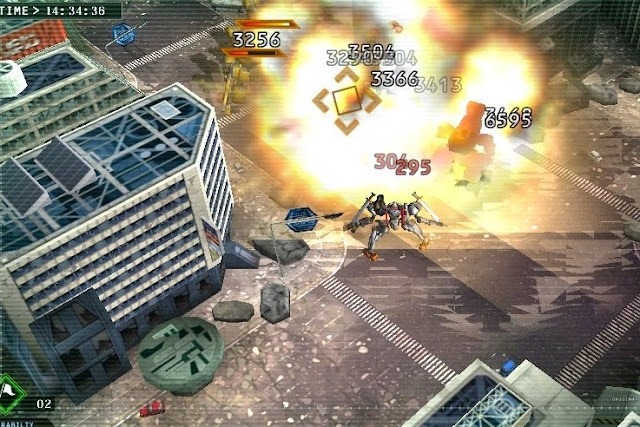 Building robots is the dream of many kids, adults, and everything in between. Building robots so big that you can then get into them and pilot them around is a fantasy that has formed the core of more games that I would dare try and recall. Damascus Gear: Operation Tokyo is another one of those games. With a near-complete focus on customising and upgrading your giant robot, Damascus Gear scratches a very specific itch, even if it is, ultimately, too limited to hold long term value.

If Diablo featured giant robots, then it might look a little like Damascus Gear. Each level in the game features a large number of enemies to plough through, and those enemies will tend to drop a lot of loot, which you can then use to customise your robot’s armour, weapons, and aesthetics between missions. Each mission itself is a relatively short affair, making for an instantly satisfying loop of loot and upgrades.

There’s also a decent setting underpinning the action in Damascus Gear. The world has gone through an apocalypse, and the few remaining humans are being hunted down by very bad robots. Those same few remaining humans rely on a crack team of people who are able to pilot machines themselves, and that’s where you come in. Yes, there are too many games that deal with apocalyptic stories, but that’s because it’s a timeless setting all the same. 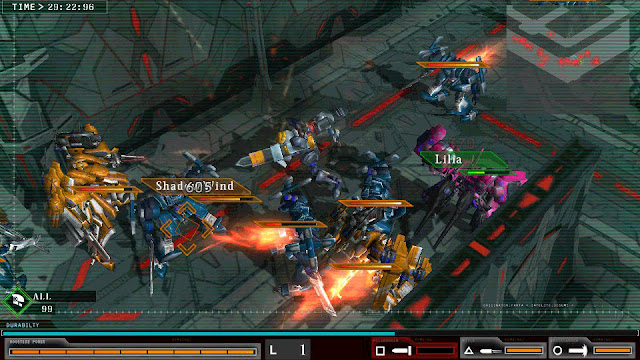 Though Damascus Gear isn’t what you’d call a narrative-driven game, it does do its best to set the scene. There’s the nihilistic “hero” who goes through the motions, but doesn’t care that much, assuming humanity is doomed. Another pilot is an utter hothead, who quickly learns just how stacked the odds are against everyone. Surprise! He becomes a better ally over time. But for this effort, there’s just not enough done with it. Perhaps because this game was originally built for short bursts of play on the PlayStation Vita, it doesn’t really take the time to develop its characters or scenario quite like it needed to. I will say that as a consequence of the narrative being so thin, the frequency of loot drops is so extreme that the game struggles to sell the idea of an apocalypse; after all, within a handful of missions I’d carted enough weaponry and raw metal that Skynet itself would be quaking in its boots.

The core gameplay is clean but refined, and relies heavily on precise timing, rather than complex button combinations. Enemy robot hordes are not a great concern, but the frequent “boss” robots are another matter entirely, and tend to hit very hard, while also being able to absorb a great deal of damage in return. The only way to defeat these enemies is to learn their attack patterns, and then making judicious use of the “boost” button to duck out of the way of those attacks at the right moment. After you do that, you’ll generally have a solid opening for counter-attacking. There’s some severe difficulty spikes with some of these enemies (or I just struggled to get the right rhythm going), and the missions in the ending third can feel downright unfair, but assuming you’re enjoying that loot loop, you’re not going to mind taking a loss as an opportunity to tweak your machine’s loadout to see if if gives you an advantage for the second attempt.

There is an element of trial-and-error with Damascus Gear. Each new major robot enemy could be very hard to avoid, and one major attack later it was game over. Of course, the second time you take it on you’ll be better prepared for that attack, and avoid it with greater ease. Thankfully the levels are, as I said earlier, short enough that it doesn’t feel like you’re wasting your life with each failed mission, but it’s a fairly cheap way of padding out the game. 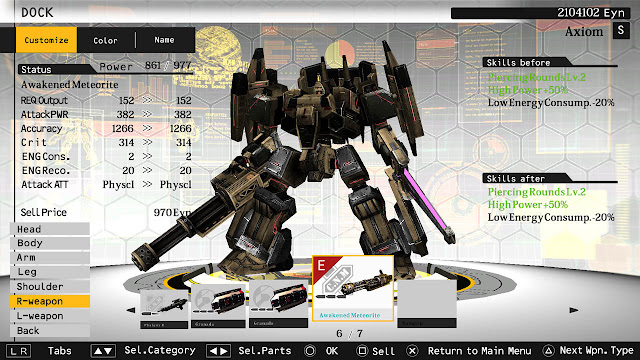 As it is, Damascus Gear is over in around ten hours, including failed missions and the like. It’s perhaps a touch long at that, but between the fast action and fast loot, you won’t really notice the time going by. Presentational elements are very, very simple; it’s nice that different equipment changes are reflected on your machine, but the isometric perspective on the small levels isn’t exciting, nor intense. Indeed, the distance demanded of this perspective means that what should be hulking robots feel small and insignificant instead. It looks fine as a Vita game upscalled to PlayStation 4, but it won’t be getting awards for the art direction either.

Damascus Gear is fun. It’s clean, well-playing fun. It could have been an awful lot more, and it’s a little frustrating that the game didn’t make better use of the opportunities that the setting provided it. It’s also not a game that you’ll remember a year down the track, let alone feel nostalgic for in a decade. But it’s, again, good clean fun, and if you’ve got a weekend to kill, this one will do it.

The fast five with Nic Watt; the developer that convinced us to slaughter bunnies