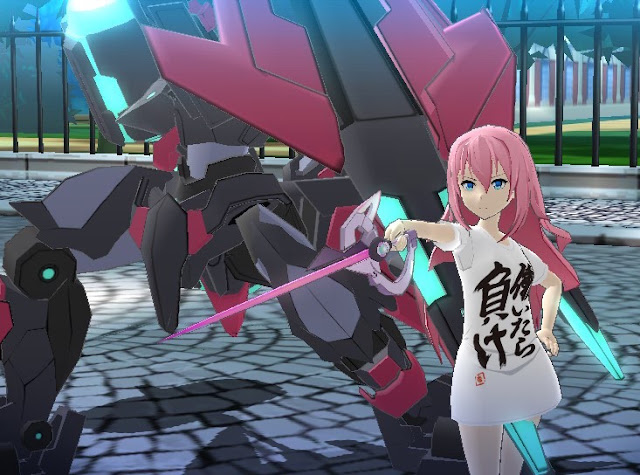 The recently aired The Asterisk War anime did not strike me as a modern classic. It’s a largely conventional battle-infused harem show and leans on the cliché personalities of its heroines. Nevertheless, there are some twists along the way and it goes down nicely as a fantasy story for viewers who don’t want to think too hard. I can see why a video game adaptation has niche appeal.
Lo and behold, A.W.: Phoenix Festa actually surpasses those lax expectations by yearning to be more than another merely serviceable anime game. For over 20 years, it’s been kosher for developers to simply grab a host of characters and mould them into fighting game heroes without providing any real context for non-fans. The creative team at Bandai Namco, though, understand what attracts people to The Asterisk War. It’s got light romance, a school setting, fan service, and various fantastical elements that augment the show’s more bog standard fighting scenes to make it special. A title that focuses explicitly on the skirmishes would be missing the boat entirely.
What we’ve got instead is a true hybrid; elements of dating simulators, time management games, and 3D fighters collide. This meticulous fusion doesn’t just better represent The Asterisk War as a property; it forms the basis for a well-rounded game that can stand on its own two feet without the anime, manga, or light novels holstering it up. In a world where anime games are made almost exclusively for players in the know, that’s a treat well worth celebrating. 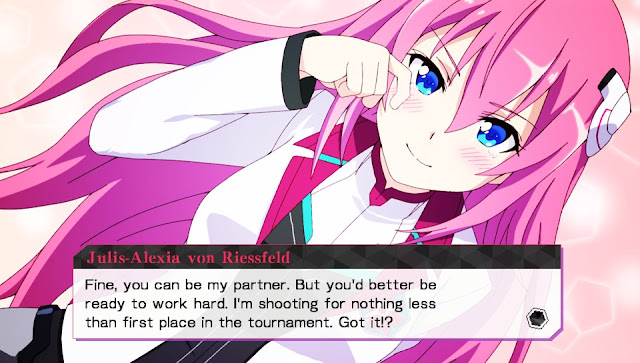 The story mode kicks off by adapting the events of the anime into visual novel form. Obviously tweaks are present to allow brisker pacing than 24 minute episodes permit and facilitate extra fight scenes, but it’s reasonably faithful and, provided you pick the corresponding character route, covers the gals’ core character motivations. So yes, you can probably play the game without any prior knowledge and still appreciate the franchise… to a point, anyway. The gist is that series protagonist Amagiri Ayato is a new student at an academy for humans with superpowers. School in this world is no joke, though, and pupils are ranked based on their prowess in duels with their peers. After encountering several young ladies of interest, Ayato prepares for a tournament, the titular Phoenix Festa, which offers the prize of granting a winner’s wish.
In this game adaptation, players opt to control Ayato or create a custom player avatar. In either scenario, the immediate goal is to find a partner for the upcoming Phoenix Festa tournament. Common sense dictates this event would be the exciting turning point; all the charming characters you’ve become acquainted with develop, drama arises from having to rob your friends of their wishes, and intense tournament bouts ensure. This is not the case. The plot sharply trails off and carries all the impact of a wet fart in church. When the bulk of it can be boiled down to “this guy fought that girl and won” without skimping on detail, you’re left with a good chunk of the game that does little but meander.
It’s tragic, really. How could such a thoroughly inventive, delightful game suddenly drop the ball? I can only theorise that the developers were forced to scale back the plot because the game was developed well before the anime’s first season concluded. Given that the second season deals more with the very tournament this game is based on, I imagine executives felt it would have spoiled the then-upcoming season. After all, the game is based principally on the anime and is clearly there to promote it, not the light novels that are technically the source material and have been out for years. I’m sympathetic to these dilemmas, but it’s undeniable that the tale begins to run on fumes for whatever motivation. 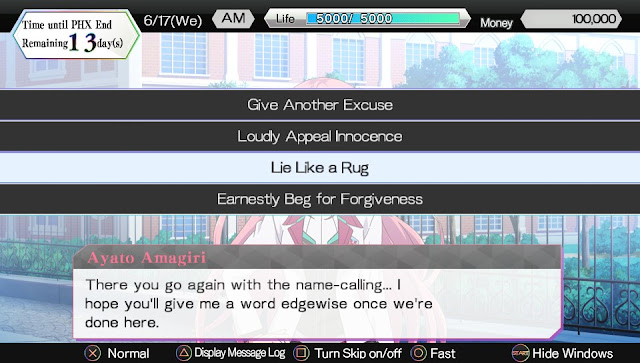 Without the narrative there to support it, the other components of the game take a hit. Look at the time-management portions for instance. The game takes place over a couple calendar months and, having limited time, players must weigh the value of certain actions against each other. Should you prioritise courting one of many stunning classmates, perform jobs for extra cash, or increase your rank by duelling other students? There are copious options available and even the most trivial one will consume half a day. My favourite bit is that only a speck of health is restored automatically each day so you have to commit to wasting days on healing. Some events even have to be organised days in advance and approved by other parties, so there’s this neat additional risk versus reward element to those ones since the mundane act of organising has a price.
Problem is, the thin plot later on means the less time consuming options such as training have no buffer in-between and there aren’t enough story-based brawls. It can get a little maddening mashing buttons ad nauseum because of the menu structure. It truly does feel like every day was designed to be sprinkled with a healthy blend of random conversations and plot-driving events so that the downtime would have more weight.
The dating elements are thoroughly intriguing, but disappointingly slim on material. In a perfect world, all the characters would have their backgrounds firmly established so that players could make an informed decision about who to pursue. Presumably to counteract the lack of plot, too much of this is divvied up into specific character routes. The bit that determines which woman is the focus is tied to a seemingly arbitrary answer at the beginning of the game, so it’s clumsy to date the characters that aren’t the centerpiece of that particular plotline and watch them stagnate. Thankfully, each of Ayato’s routes can be completely comfortably within four hours, so there’s certainly time to romance them all and appreciate their individual personalities. 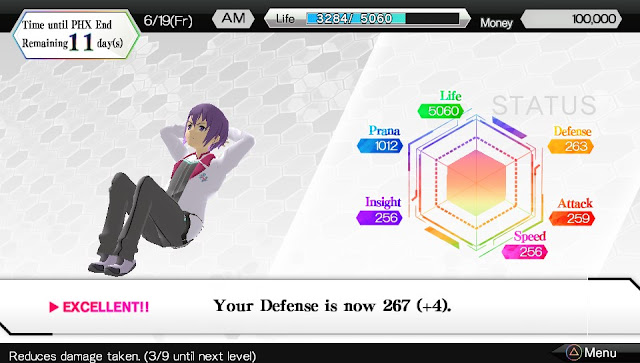 The actual interactions with the characters could use some work as well. You get to schedule when and where to go on a date, but there are only a handful of scenarios per girl and all are relatively brief and uneventful. If you want to maximise your love stat for any one lady, this means several dozens of these repetitive events are required. Alternatively, you could bestow gifts upon them, but there’s really no incentive to spend money when you can achieve the same number of points for free. Well, that and there’s no suspense in picking a gift because the game outright informs you which girl loves what. As with the story, the dating component could have been splendid with more dialogue and outcomes. This is worsened by the fact that, unlike Ayato, avatar characters can’t even achieve the same “level” of romance.
Dates also serve a secondary purpose in readying partners for battles. The actual combat system is strong in and of itself, with a pleasantly simple control scheme and sufficient depth. Most battles are two-on-two affairs where you’ll have to coordinate with partners in a 3D arena. The joy comes from the variety of weapons and learning to counter the traits of particular foes. There are the expected sore spots – some weapon types are inherently superior and enemy AI could use some work – but as a whole, it’s definitely gratifying.
It does encounter a particularly nasty pitfall, though. The two playable characters in the story mode, Ayato and the avatar, occupy opposite ends of the difficulty spectrum. Whereas the former is handed bloated stats and a supreme sword like candy, the avatar player is a blank slate. The result is awkward in that competent players can get by without having to power up Ayato much, whereas the avatar is always wages uphill struggles. This would be fine if the avatar had access to the same number of conversations as Ayato as the avatar is basically hard mode for once players have cut their teeth. Losing out on dialogue in a game starved for it is not a worthy trade-off, however. 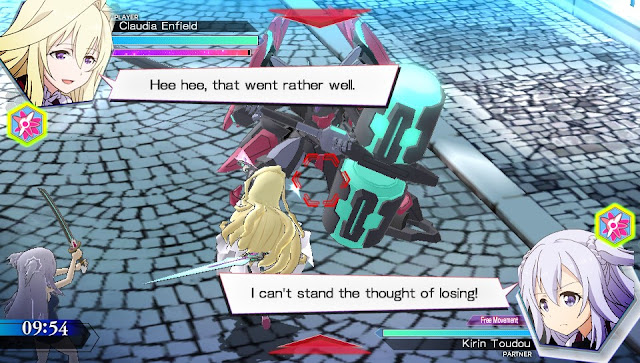 A.W.: Phoenix Festa is like a tower whose foundation consists of indestructible steel but its upper half of Jenga blocks. The core gameplay loop is ambitious, competently designed, and fulfilling. The visual novel component sets up compelling circumstances in the early going…and then inexplicably fizzles out while the game continues. The entire experience winds up compromised as a result.
I have zero doubt that, given extra time and material to work with, the developers could have produced one of the best anime-inspired video games this decade. What’s here is still modestly enjoyable, though, and this title is worth supporting just to champion the notion that ambitious anime games beyond the Narutos and Dragon Balls of the world deserve localisations.