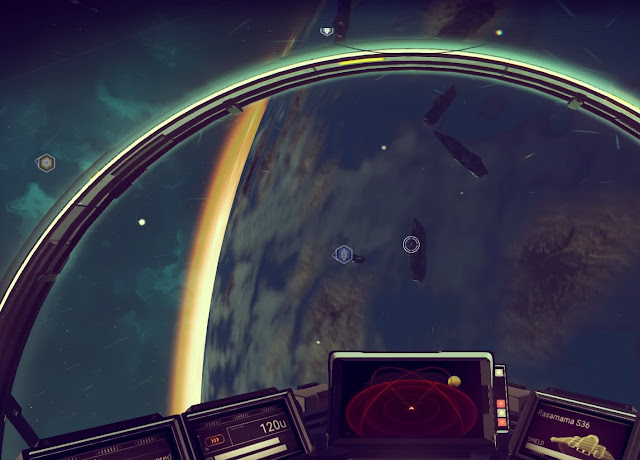 Since launching last week, No Man’s Sky has been met with more than its fair share of controversy. One of the biggest launches of a new IP by Sony was a massive commercial achievement, but there are more than a few people that seem to be disappointed by the game’s heavy emphasis on resource collection and survival, the lack of multiplayer interaction, and otherwise the perception that Hello Games’ work hasn’t lived up to its promises or ‘hype.’

And that’s a pity, because this game is utterly brilliant and deserves to be analyzed for what it is, not what it is not. No Man’s Sky is a thematically dense exploration game that is absolutely breathtaking to simply exist within, and that’s just as well, since that’s also the point of it. It’s a game that actively rejects the standard concept of objective-driven gameplay, and the result is an experience that is in many ways as alien as some of the worlds it offers. But by the same token it’s a game that is majestic to behold and almost unique in tone.

But first, let’s talk a little about the basic precepts of existentialism. A popular field of philosophical study, existentialism is that philosophy that addresses a person’s role in the world and cosmos. It’s closely associated with nihilism – that one that people loosely associate with the idea that we’re all doomed so why bother, but really, existentialism is the belief that the world or universe is effectively meaningless and absurd, and we disorientate and confuse ourselves in trying to make sense of it all. 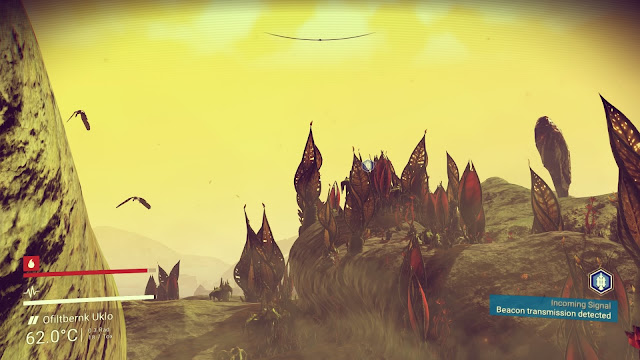 It’s a perspective that Neil deGrasse Tyson, the scientist well known for his excellent Cosmos TV series, expressed well. “To asset that the universe has a purpose implies that the universe has intent. And intent implies a desired outcome. But who would do the desiring? And what would a desired outcome be? That carbon-based life is inevitable? Or that sentient primates are life’s neurological pinnacle? Are answers to these questions even possible without expressing a profound bias of human sentiment? Of course humans were not around to ask these questions for 99.9999% of cosmic history. So if the purpose of the universe was to create humans then the cosmos was embarrassingly inefficient about it.”

Like most astrophysicists, deGrasse Tyson is critical of the idea of a God or Gods, and puts religion down to sociological factors; a construction of society to explain what it was at the time unable to explain. No Man’s Sky’s very title is in symbiosis with his thinking; the sky doesn’t belong to humans, or its Gods, and indeed we are petty and small creatures underneath it.

At first you’ll be comfortable enough with your experience. You’ll be “birthed” on a randomly generated planet, and hopefully it’s a hospitable enough one that you’ll be able to complete a couple of key first objectives; you’ll be guided to collect the resources you need to repair your ship, and grab what you need to support your life systems on your first space voyage. And, if you’re anything like me, your first instinct from there will be to test out that theory that there are 10 billion odd planets in this universe. You’ll take off into space, and then it will hit you; an overwhelmingly existentialist feeling, almost melancholia, that there you are in a very vast space, and you really are on your own. There might be one or two other ships floating around, but it’s a lonely, almost empty blackness that surrounds you, and nothing comforting or familiar is remotely close to you. 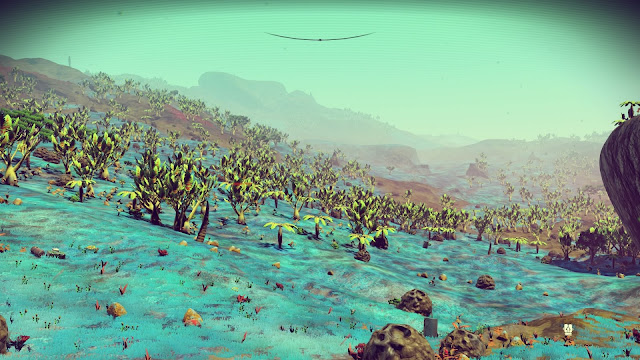 This is why multiplayer could never have worked in No Man’s Sky. One of the key thematic designs of the game is that utter loneliness – an ambience that would be lost if you could track down a fleet of buddies and explore worlds together. Multiplayer would have given the game purpose and intent, and filled in those 10, 15, 20 minute periods of time where you’re simply holding down the throttle on the way to the next planetary body. Multiplayer would have broken the slow walks across land in search for scarce or precious resources. Multiplayer wouldn’t have worked for No Man’s Sky, because No Man’s Sky wants you to feel the journey, and feel alone out there, with only the faintest hints of other people ever occupying the same virtual space as you are.

Yes, it’s possible to name planets and the living things you discover along the way, and these are uploaded to a server to be accessed by everyone, but with such incredibly vast spaces and worlds, there’s no guarantee that anyone, ever, will find Hatsune Miku, a chilly but vibrant planet that I soiled with my first tentative steps in the world. That classic philosophical mind game “if a tree falls in the middle of the forest and no one is there to witness it, did it fall at all?” is, in part, an existentialist one, and it applies in variation here: Does Hatsune Miku (the planet, we already know the idol exists) really exist if no one is there to find it? Is the life of that planet (Lin, Ren, Luka, KAITO) there if no one else discovers the species? There’s a powerful air of pointlessness to that naming feature give that, even if someone else does at some stage discover Hatsune Miku, the chances that I’ll ever be aware of that are negligible. For all I know someone else has discovered the planet and driven Luka extinct… but that monster will only be the one that’s ever aware of that.

Absurdism, a popular art movement that shares thoughts with existentialism and that found special favour in the theatre of playwrights such as Tom Stoppard and Samuel Beckett, is at play through what you do in No Man’s Sky. There’s a vague goal that there’s a star at the centre of the universe that you’re hunting down, and rarely you’ll find yourself in conflict with denizens that you manage to discover along the way, but the dozens and dozens (and, likely, dozens) of hours between those first steps and reaching that goal are as aimless as they are driven with purpose. Hello Games actively obscures attempts to make sense of the universe by making those rare aliens that you can interact with speaking in dialects that you can’t understand without finding artefacts on planets… and yes you’re going to have to explore entire planets to find them. 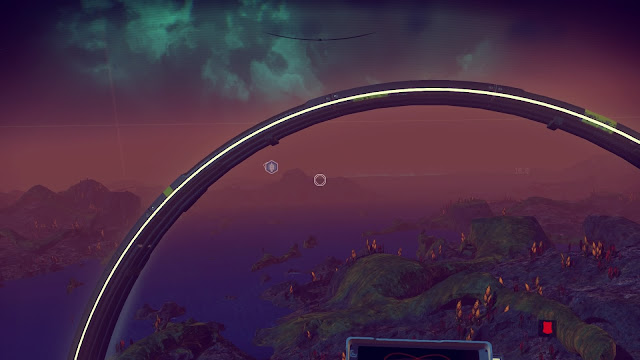 These needle in a haystack searches are fundamentally absurd – you’re not even sure if, after mastering enough words of a foreign language to understand the alien, they’re going to say anything that’s actually going to help you in any way. It’s all-too-easy to feel like you’re performing a one-person performance of Waiting for Godot through much of the journey, by simply noodling around and hoping that something shows up to make what you need to do next more clear.

There is something of an explicit narrative buried deep within the No Man’s Sky experience, but it’s buried deep and completely tangential to the experience of simply existing within its billions of worlds. No Man’s Sky is procedurally generated, and perhaps most similar to Proteus, of all games. Each planet has a completely randomised weather and environment, and this deeply affects what else is on it. Wind up in a superheated planet of 60-70 degrees Celsius, and it’s going to be a desert environment with little in the way of trees, and sparse fauna that tends to be scrappy and tiny. That’s not the most hostile environment; have fun trying to survive on a planet of acid rain and next to no life. Of course, you then come to appreciate those lush, green, temperate planets all the more.

As with Proteus, the music (produced by the superb 65daysofstatic) will change dynamically based on how you’re interacting with the world. And, as with Proteus, what you can actually do in these worlds is minimal. For the most part what you’ll be doing is pulling out a mining laser and breaking trees, rocks, and (if you’re feeling nasty) animals for their resources, which you’ll use to either simply survive, or push deeper towards that final goal. Some animals might fight back, and there are robots that have a habit of attacking your character, and yes, it’s possible to die in No Man’s Sky. Upon respawning, those resources are then recoverable if you can navigate back to where the death happened. 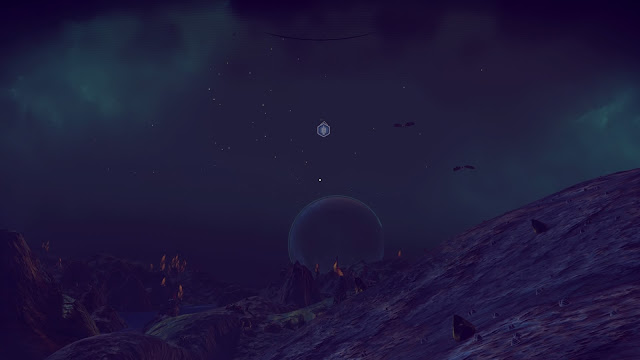 Related reading: Matt’s review of Proteus which, scale aside, is actually quite similar to No Man’s Sky in theme.

No game, film, book or otherwise has been more effective in capturing what the experience of exploring the universe must be. Lonely, hostile and unforgiving, Hello Games’ effort works so hard to reject the convention on how games are made that it’s easy to understand why people expecting something more traditional might come away disappointed. After all, this is a rare indie game that is priced as a full retail title. But the scope, ambition, and thinking that went into crafting something challenging (intellectually) and tonally different means that this is one of the most important games created in many years.