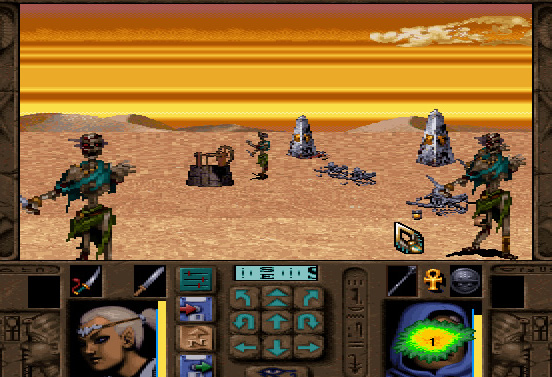 Back when Dungeons & Dragons was being managed by TSR, the company experimented with a massive range of “settings.” These settings took the basic medieval fantasy of Dungeons & Dragons, and twisted it to fit with other kinds of fantasy. There was the high magic 1001 Arabian Nights-styled Al-Qadim, The brutal violence of the Dark Sun setting, and fan favourite, Planescape, which was a fascinating mix of medieval swords-and-sorcery and an odd science-fiction element that allowed players to jump between worlds and planes of existence. And then there was Greyhawk, the Forgotten Realms and Dragonlance – all very different takes on the more standard fantasy stuff.

One of my favourite settings of all these was Ravenloft, which was the all-horror take on Dungeons & Dragons. In a world of evil piled on violence, and creatures of the night, “nations” of decrepit populations of tormented citizens existed under the rule of creatures of complete malevolence, generally based on horror film and literature icons. One “nation” was ruled by Strahd – Dungeons & Dragon’s take on Dracula. Frankenstein’s Monster holds sway under another. Another adventure puts players in a Victorian London-like setting, being tormented by a Jack the Ripper-like creature.

And then there was Har’Akir, ruled over by an animated Mummy, Anhktepot. Har’Akir is a world of deserts and disease, and as a kid I found the video game adaptation of that world, Stone Prophet, absolutely fascinating.

As with all Ravenloft adventures, to do the adventure justice, Stone Prophet needed to provide players with the constant sense that life, survival or heroism is not easy, and Stone Prophet certainly achieves this, through some harsh survival requirements, a generally significant difficulty level for combat encounters, and a narrative where, uncommonly, NPCs don’t fall over themselves to worship the hero. Characters experience thirst under the burning sun and heat, and need to constantly consume water – a precious resource – in order to survive.

(Note: DDNet did not produce this gameplay video)

The world itself is quite small, but also fairly open, and there are a couple of different points of interest that you can explore as the mood strikes. Of course this also means you can run into enemies far too dangerous for your group, with minimal warning, and a “load save file” was generally the result. Modern players would chalk this up to poor design, but I think it fits perfectly with the tone that Ravenloft games really need to succeed thematically.

The game also does a great job of convincing you on how downtrodden the people are. They hobble about, wracked in pain and tormented by disease, and are anything but receptive to the presence of the heroes (heroes bring trouble, after all, and they’ve got enough of it already). As simple as the game is from a technical perspective, tight writing and an effective MIDI soundtrack still create this atmosphere of real and unabating misery, and there is still a certain intensity and tension that comes from playing Stone Prophet.

I first played this game when I picked it up in a collection of SSI-developed Dungeons & Dragons games, called the Advanced Dungeons & Dragons Collection. The other titles in the box included Dark Sun: Wake of the Ravager (which to this day is one of my top ten games of all time), Al-Qadim Genie’s Curse, Menzoberranzan, Ravenloft: Strahd’s Possession, and Dark Sun: Shattered Lands. It was a box of games that were almost designed specifically for me, and I distinctly remember saving my allowance for weeks to be able to buy it (thankfully it was still there when I had the money saved!). Bringing it home was so incredibly exciting for me – as an avid fan of Dungeons & Dragons as a kid, here I was with a box filled with discs of adventures!

These games were all quite buggy, as so many MS-DOS games were, but I would persevere through the bugs to play these games over and over again. That being said, Stone Prophet is one that I have grown to appreciate more with age. I’m more keen on it now, having re-purchased it (and all the other collection games) via GOG, than I was back when I was playing with it on disc. The level of challenge it posed was a sticking point back then. I didn’t mind difficult RPGs, but I needed to be in a very specific mood to enjoy Stone Prophet, whereas now I can better appreciate how the difficulty helps to reinforce the themes of the game.

I also wasn’t as big on the setting, when compared to the other games in the box. When compared with the classical gothic horror of Strahd’s Possession, or the opportunity to go to Menzoberranzan, the city of the Dark Elves and one of the coolest cities ever created in the Dungeons & Dragons multiverse, or the exotic magic of fantasy Arabia in Genie’s Curse, the downbeat tone and desiccating heat of Stone Prophet I found to be bland, repetitive, and uninspiring. The two Dark Sun games were also able to do that “survival is its own reward” shtick, but with more panache and style, as I thought at the time.

That’s an opinion I’ve re-evaluated since replaying Stone Prophet. I appreciate its unrelenting hostility far more, now, as it means the game also has an almost uniquely pure vision. Where other, modern, games concern themselves with establishing a rhythm, and even horror games build in patterns of relief and rest, Stone Prophet doesn’t do that. The Souls games, or Bloodbourne, are certainly more difficult and will test your skills as a player more, but those bonfires and hub worlds, as moments of respite, are simply not there in Stone Prophet. There is no relief from the heat of the sun or the dangers of the underground.

How relevant is the game now? It wasn’t the most influential game of its time – which is why you don’t see people referring to “Stone Prophet clones” the way they do other classic RPGs, most relevant to the crawler genre being Wizardry. Nor would I say the game has held up particularly well with time. Unfortunately horror games, being what they are, rely on players connecting to what they’re playing, and while at the time Stone Prophet was running on an advanced enough engine for players to consider it up there to pull them in, the same is no longer true and it all might be a little abstract for most.

But there might be some that find it interesting, nonetheless. After all, how many out-and-out horror games are set in blasted desert landscapes? You’d need to be enough of a retro games fan to get over the UI and art design, but once you’re immersed, this here is an intense crawler with some real bite and thematic creativity to go with it.