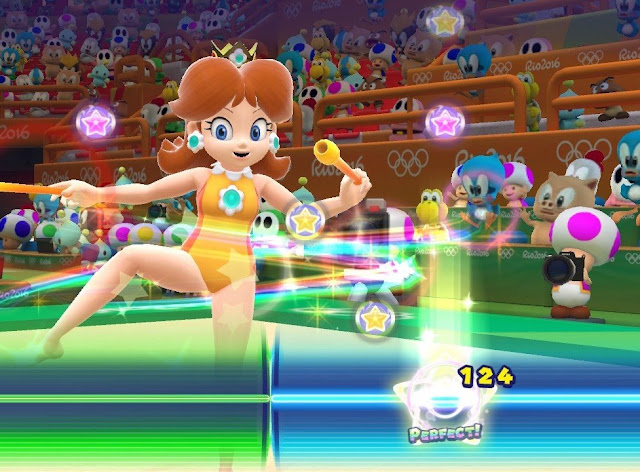 Most people know what they’re getting in the inevitable Olympic tie-in games. In a bid to give players the chance to experience a whole range of different Olympic events, these tie in games go for breadth rather than depth, and never end up offering a particularly satisfying experience in any of them.

That being said, the naturally competitive nature of Olympic sports, as well as the simplicity of the recreation of each sport means that they make for good party games; everyone who is in the Olympic spirit can jump up, plug the game in, and waste a couple of hours trying to beat one another across a whole bunch of sports.

And that’s why it’s weird that Mario & Sonic at the Rio 2016 Olympic Games is a 3DS title. That’s not a console that is especially good at doing the local multiplayer, shared-screen experience that is the greatest strength of these kinds of games. The Wii U version should do a better job of that when it releases late in June. However, this 3DS game does try to stick a fairly in-depth single player story mode in there, and does its best to turn each sport into a fairly comprehensive experience, but ultimately it’s difficult to shake the feeling that, after playing each event four or five times, you’re done with it. That’s even more true if you’re already broken the “world record” and thus have effectively completed the “ultimate challenge” for each event. Believe me, it’s possible to achieve these world records from the get-go, further slashing the replay value of the game. 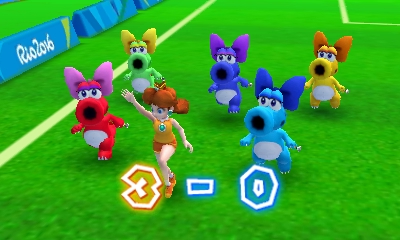 But first, the events themselves, and the developers have done a really good job in providing that breadth of experiences that an Olympics game needs to. There’s the simple speed or power sports – swimming, running, hurdles, long jump – and those all play out exactly how you would expect, if you’ve ever played an Olympics game in the past. But there’s also team sports and more complex games of skill at play here. Beach volleyball, football (/soccer/whatever you call it), golf and table tennis all gun to be simple, but accurate, takes on their individual sports. Most of them actually succeed quite well. Beach volleyball, for example, offers much the same depth that was in the dedicated Super Strike Beach Volleyball. Golf has a simple, but technical, swing mechanic and, while there’s only one course, it’s every bit as enjoyable as the actual Mario Golf titles.

In addition to including the basic rules of the sport, each of these events includes simple power-up “super shots” which, while not as ridiculous as we’ve seen in games like the Mario Tennis on the Wii U, add a bit of party vibrancy to the proceedings. Each event also has fantasy alternatives, which include Mario and Sonic elements that make them less serious, relatively speaking, and effectively double the number of events on offer.

My personal favourite, however, is the rhythmic gymnastics – and that’s because it’s my favourite event in real life too (no, seriously, look at Son Yeon Jae perform and try telling me that’s not a special sport). In the game, the rhythmic gymnastics plays out much like a Hatsune Miku rhythm game (a win there), where you need to tap buttons in time with where they appear on the screen, and in the background your character will perform his/her routine. My great disappointment with this event is that there is so few music tracks play through, and that goes back to the point I made at the start; the problem with Olympics games is that for fans of the individual sports, the amount of play value you’ll get from each individual sport is just not up to scratch when compared to what a dedicated game will offer, most of the time. The football game isn’t even close to a FIFA (or even Mario Strikers) in terms of depth. The golf game lacks variety in courses, and the rhythmic gymnastics has a paltry few different music tracks to master. 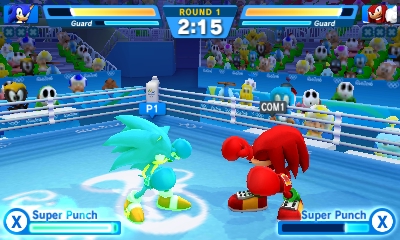 With that being said, what I wouldn’t give for a full, dedicated, Hatsune Miku Rhythmic Gymnastics game. Listen up, SEGA!

As I mentioned earlier, there’s a single player story mode that tries to hide the lack of depth running through the individual events by introducing a simple levelling and equipment system. As your little Mii player plays, he or she will accumulate experience, which allows him/her to buy better costumes that will level up his/her statistics and improve his chances in winning events. It’s a fairly effective way of concealing some of the grinding you’ll need to do through events over and over again to progress through an overly-padded “story,” and while similar smokes and mirrors have certainly worked in more than a few JRPGs over the years, it has to be said that the narrative here was really not enough to hold my attention.

I think the other thing that was lacking from this one is the atmosphere of the Olympics itself, which likely has as much to do to its actual release date as anything else. Simply put, I’m not feeling the Olympics right now, and that’s affecting my interest in the game. I love the Olympics, and I am one of those guys that takes time of work to watch when events that I’m really keen on are on. I pay for the streaming service so I can watch multiple events at once, so yes, I do buy right into the spirit of the Games.

During that time I also tend to enjoy Olympics games more. In fact, it’s really the only time I play them. Two or three weeks after the games are over, I’m back to the more complex sports games that I enjoy, or I’m playing games of sports that should be Olympic events but are not (cricket). 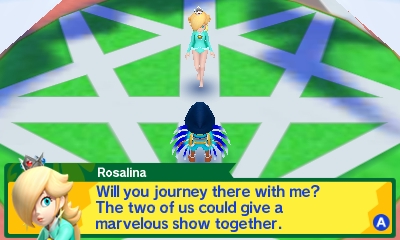 In releasing four months before the Olympics, Mario & Sonic at the Rio Olympic Games have simply caught me unprepared. That actually annoys me a little, because as far as I can tell it’s going to be the only Olympics game released this year around, and that means that when the actual event rolls around, I’m not going to have a game to play to further enhance my experience of the event.

The presentation is lovely, however, and carries all the bright, cheerful Mario and Sonic charm that we’ve come to expect. I can’t help but smile as Yoshi does the airplane victory run after scoring a goal in football. Oddly, while the roster is huge, you’ve only got a very small number of characters that you can choose between for each event. Perhaps this is an effort to save on rendering so many characters across so many events, but you’re flat out of luck if your favourite character is not an option for your favourite event.

Mario & Sonic at the Rio 2016 Olympic Games is good fun, but ultimately it’s too shallow and simple to be anything but a passing diversion. Nintendo and/or Sega could actually build a bunch of the minigames in here into full sports games in their own right… and frankly I wish they would do just that.

The Friday Ten: The best characters in Disney Crossy Road