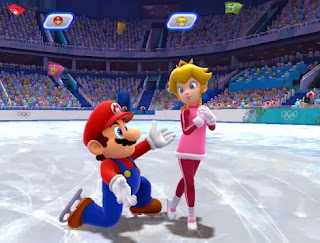 With each new release, Mario & Sonic at the Olympic (or Winter Olympic) Games takes one more step towards becoming a generic and soulless minigame compilation. There’s still fun to be had from these games, but it’s easy to tell that budgets are getting smaller and ideas are running thin.

I still remember the Mario & Sonic at the Winter Olympic Games on the DS from the last Games. That one was a lot of fun with minigames that had a measure of depth to them. But then the last Summer Olympics game on the 3DS featured very few games that were worth playing more than once. Having not played one of these games on the home console before I’m happy to say the Wii U game is better than the 3DS Summer Olympics release, but can’t match that DS game that I enjoyed so much as a single player experience.

To make things clear from the outset: this game is best played in multiplayer and by sticking to the events themselves. There is so little of worth outside of the sports games that after playing the trivia mode and the terrible single-player game once I realised that the only way I would ever play this game again would be with beers and friends around. 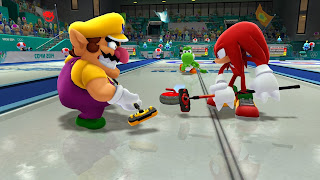 But you know what? That’s not a bad thing by any means. An Olympics is best enjoyed when family and friends are able to meet up and share an experience without worrying about complex rules or gameplay that is so reliant on skill that it’s impossible for a more casual player to beat the experienced gamer. The Wii U might not lack for these kinds of experiences, but with Christmas coming up (and Christmas parties not far behind), there’s reason enough to grab a new game to pull out with the eggnog.

Given that it is the local, casual multiplayer that is the best way to experience the game, I found the events that are modeled after their real sports far better than the fantasy events, where the additional rules bring the minigames closer to an inferior clone of Mario Kart than a simple pick up and play experience. In single player there’s no doubt that the Star Wars Episode 1 speedcraft racing clone is the richer experience than the waggle-heavy speed skating, but it’s still not great at it (especially when there is already a perfectly good Kart racing on the Wii U), and it’s largely missing the appeal of the game. 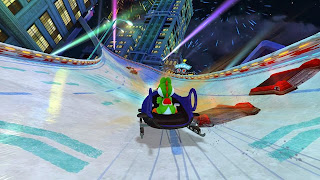 Instead, with friends over, there’s some real fun to be had with the Skeleton, the Bobsled, the Alpine Sking and the simple but fast Ice Hockey game. Coupled with the ever-charming Mario and Sonic characters (back off, Yoshi is mine), there’s something immediately accessible for all ages about this game.

Within that context it doesn’t matter so much that the waggle controls are not hugely precise (you’ll be too drunk when playing the game to really care, anyway). It doesn’t matter that there’s Miiverse integration to post best times, but the competition there gets dull quickly when you consider that it’s possible to break Olympic Records with the very first attempt at a level and therefore the spirit of competition is largely rendered moot. It doesn’t matter that the online multiplayer is limited, because playing online multiplayer by yourself over Christmas is pretty lame.