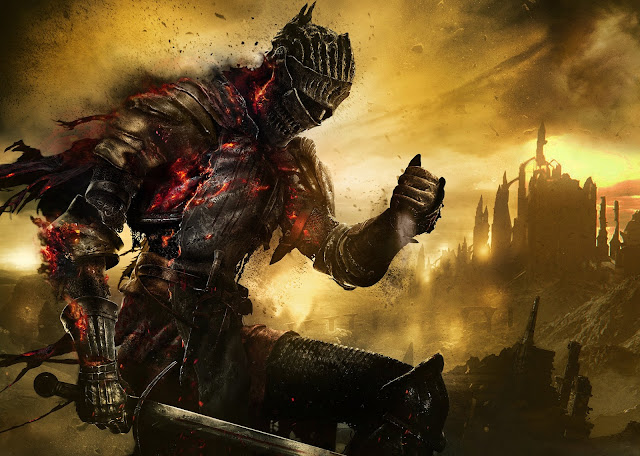 Dark Souls III is a superb game that mixes a gothic, melancholic atmosphere with genuinely challenging combat and a narrative that obscures the true, startling revelations behind its thick fog and inky, unforgiving darkness. It obscures, but it doesn’t hide; you can learn Dark Souls III, and you’ll feel great reward in doing so, because it’s purely your achievement. As with all of FromSoftware’s recent work, this game doesn’t hold your hand, and it’s the better for it.

As with its predecessors, the boss battles are the dramatic highlights. They’re the only moments where the music picks up, moving from subtle or non-existent to become a rousing, angry, gravelly rhythm, which is just what you’ll want backing your dance-like movements and you duck and dive around the reach of the horrifically potent beast that you’re facing down. The music almost helps provide you cues to time your movements, and you’ll need every bit of help you can get, because it’s not just the reach the monsters have on you. They’re also faster and vastly more powerful than any human could ever hope to be.

Also similar to what we saw in the previous two Dark Souls (and Demon’s Souls before it, and Bloodborne after it), Dark Souls III is makes the process of learning through failure its core feedback loop. A trap will wipe you out the first time you encounter it. An ambush will put you right in the middle of a horrific sandwich of flesh and rotting bone. A moment of stupid overconfidence will convince you it’s a good idea to charge into a room with a single enemy in it, only to be pelted from above by firebombs and worse, wielded by enemies you had no hope of spotting beforehand.

This fellow shows up immediately after the tutorial is done.
Posted by Digitally Downloaded on Sunday, 27 March 2016

Dark Souls III loves to surprise in new ways that was less common in its predecessors. One of its favourite new tricks is to have monsters that on first glance look weak, if not harmless, only to have them become something truly nasty once you get closer. Don’t be quick enough in defeating an enemy, and he might explode into a pulsating, ugly pile of teeth-filled flesh, in a heartbeat flipping from being as harmless as Souls enemies get to being something that would be a boss in a conventional game. Another hobbled, unarmoured creature will wave his little lantern around and suddenly a horde of decrepit, mindless zombie things will take up arms around you. This is nothing that we have not seen in previous Dark Souls games, but on the most subtle levels, it does feel like the director of the series, Hidetaka Miyazaki, is aware that players will have a better understanding of his sense of design, and this is his attempt to compensate by ramping up the raw danger that every single enemy may or may not present. It was certainly enough to keep me on my toes with each new area I visited.

This brings my to my chief concern with Dark Souls III, and it’s an impression that I had after playing the early gameplay demo, and was never able to shake while playing through this; the simple reality is that the series has lost some of its oddly beautiful sadism, replacing it with the most faint senses of nostalgia. It might sound weird to be nostalgic over a series that only sprung into life midway through the PlayStation 3’s life span, but there’s a definite sense of anticipation now in intuitively knowing when you’re likely to run into a boss, and where you’re likely to be able to find a bonfire to rest up at. The fundamental rhythms of the Souls series has become a clear and definite heart beat, one that Dark Souls III is careful to never let beat irregularly. Newcomers won’t necessarily care, but I suspect series veterans will be left of a mixed mind, sitting halfway between loving an opportunity to return to the dripping, melancholic atmosphere of the previous Souls games, while also questioning whether they’re happy that for a series that made its name by daring to be different to be playing this particular itiration so safe.

Dark Souls III is superior to its predecessors, however. The fast travel system, which so broke with the atmosphere of the second game, and allowed the developer (sans Miyazaki, in that instance) to structure the environment like a series of more linear point-to-point levels, has been overhauled completely. There’s still fast travel, but the relative closeness with which the bonfires – those same rest spots that facilitate the travel – are positioned shows that it hardly matters any more, beyond being a simple convenience. For Dark Souls III’s difficulty rests less in making your way through the game, and more with picking the directions that you can take. Over and over again you’ll be given multiple options for paths to take, and each will be filled with danger, reward, beasts and objectives. Tying it all together is a hub, which I was so happy to see return in almost the exact same form that I loved in Demon’s Souls, way back when. Miyazaki’s design philosophy has always been to provide an openness to the experience and to demand that you find your own way through his worlds. The hub system, joining together different parts of the world like spokes off a wheel, is the optimal way of doing that, even if the freedom isn’t quite as open as we saw in Demon’s Souls. 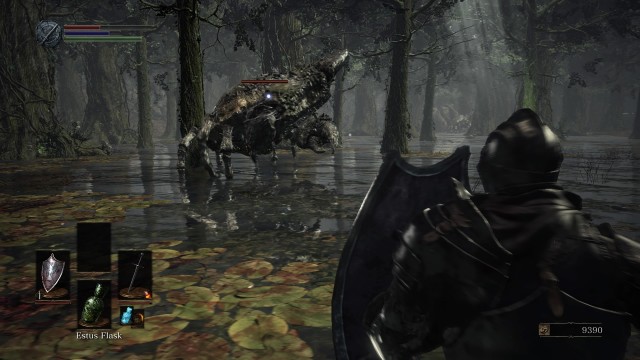 It would be unfair to expect that Dark Souls III’s list of boss battles would universally break new ground, and they don’t. There’s similarities between the tactics and attack patterns in many of the battles to what we’ve seen and tackled before, but nevertheless (and really quite impressively), FromSoftware did manage to come up with some stuff that surprised me – someone that is not a veteran of four Souls games, if you count Bloodborne and Demon’s Souls. Chiefly the surprises would come where, mid fight, a boss would shift into something far worse, and then whatever comfort I had worked myself into would be replaced by something that had me shaking all over again.

More than anything else, what Dark Souls III benefits from the most is the power that the new generation of consoles has brought to the party. This game simply drips with atmosphere in a world that manages to transition from one darkly beautiful sight to the next. It’s a game that invites you to survey it in depth, providing an easy-to-find pair of binoculars close to the start of the adventure, and then constructing environments that offer tantilising objectives from one nook and cranny to the next. In the distance, as you clamber across rattling rooftops, you’ll spot a hint of a glow of a treasure, and then you’ll sit back and start to plan the route you’ll take that will hopefully get you there in one piece. The swamplands are so effectively sickening that I felt claustrophobic and heavy just watching my avatar struggling to survive one of the most dirty, inhospitable places in video game history. And yet there I was searching for trinkets, knowing that was coming next would be even worse and the secret caches that swamp held might just help me get that little bit further.

Again, how you actually get there is largely up to you, with just about ever build of character imaginable being perfectly viable. I have forever stuck with the knight-type character, relying in my heavy suits of armour and weighty, comforting shield to ease the pain as I stand toe to toe with creatures twice my size. But I know a nimble, dual weapon-weilding rogue can duck and dive out of harms way while she waits for an opportunity to get behind the enemy for a backstab. In fact, where dual wielding largely backfired the first time it was tried in Dark Souls II, here it is flashy, visceral, and empowering. And the magic users, as unweildy to me as I have always imagined magic should be, are equally powerful – brutally so – in the hands on someone who actually knows what they’re doing with them. 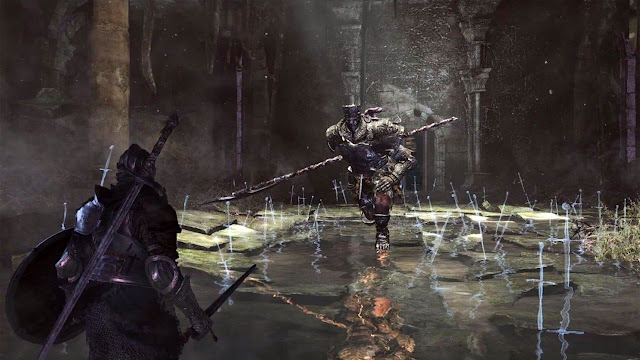 And I’d be remiss in talking about a Souls game without mentioning the storytelling itself. It’s so ambiguous that it’s easy to miss the nihilism and existentialist themes that it explores through its riddles and through the character of the environment itself. If there’s one overwhelmingly positive thing that can be said about the game being a more-or-less direct sequel to the original Dark Souls, it’s that the game’s predecessor itself has become a part of the storytelling process. But, as you would surely expect by now, it’s not explicit in that storytelling. Throughout the adventure are little hints and riddles of their own that refer back to the exploits that you go up to in the first game. I’d go as far as to say that this element of the storytelling is an essential part of the beautiful, obscured puzzle that is Dark Souls III, and that From Software and Bandai Namco really should have included the original in the box (even if it was in an unaltered state) so as to help clue that rare person in who will be coming to Dark Souls III as their first experience. As with all of Miyazaki’s works, the storytelling is at its best when it makes you do the work, but provides you with the tools to solve its riddles. The lack of Dark Souls I in the box is most certainly a missing tool.

But most people who will be playing Dark Souls III have played Dark Souls I, so that’s a not so much a complaint, and more observation. What I will say is that Dark Souls III has to be the end of the Souls series. This franchise sits so very close to tipping over that edge to a complacency that can easily be seen as mediocrity. My recommendation is that FromSoftware and Bandai Namco look to reboot King’s Field, or at least head down the path that Miyazaki did with Bloodborne to push out something so different in setting and environmental design that it felt like a new experience in itself. Because I want my Dark Souls memories to be positive, not one running out of ideas, and I suspect Miyazai has now been tapped out in what he fan do with gothic high fantasy.