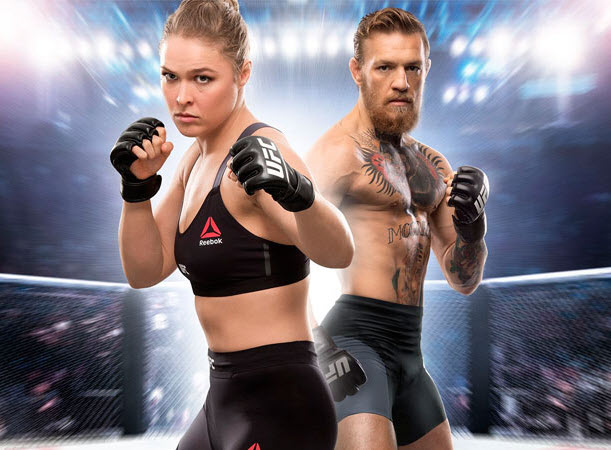 I enjoyed EA Sports UFC well enough when it first came out, despite its numerous issue. I am happy to say that EA Sports UFC 2 has improved upon a lot of those issues and offers up a good, technical fighting experience unlike much else on the market. That being said, the game still has some areas where it can be improved upon as well.

Mixed martial arts continues to gain popularity, and while it is a sport that gets a lot of love in North America, it ultra competitive combat sport has plenty of overseas fans as well. With its promotions and sometimes larger-than-life fighters, at first glance it would be easy to compare EA Sports UFC 2 to a professional wrestling game. Despite a couple of combatants that have crossed over from one to the other, the two are quite different as sports and also as video games.

Instead of crazy antics and ridiculous storylines, for better or for worse EA Sports UFC 2 is focused almost solely on the combat. To that end, the game succeeds rather nicely. There is no visible health bar, but fighters take on physical damage over the span of a match. Instead the only real HUD element to concern yourself with is stamina. Having a higher level of stamina means you hit harder, and you are less likely to get rocked during combat. In many ways, this aspect of the game is structured similarly to EA’s own Fight Night games. As you attack and get hit, your stamina is chipped away at, leaving you with a smaller reservoir to work with over longer fights and making your combatant more susceptible to a knockout blow.

The combat itself is slower than a traditional ‘fighting’ game, like Tekken or Street Fighter. There is a good deal more strategy as you come out of your corner trying to figure out how you want to approach the fight. Do you go in aggressively and try for the quick win, potentially wearing yourself out for later rounds? Do you want to block and counter-strike? Do you want to try holds and submissions? Different opponents have varying strengths and weaknesses and the stamina management is a big part of why it all works.

There are essentially two different styles of play. You can rely heavily on strikes, or you can try to grapple. The submission game never really clicked for me in the first game, and admittedly I took to the stand up game far better with EA Sports UFC 2 as well. The first of my two career mode characters was a flashy striking character, while the second was a female grappler. The two styles were really quite interesting and markedly different from one another.

Putting personal touches on your characters was a big part of what EA Sports UFC 2 has to offer. Character creation is pretty robust, both from the cosmetic standpoint and also for skill and stat distribution. The career mode in particular does a nice job with this, letting you create a character with low skill and abilities. You begin humbly enough, just trying to make your name as a rookie, but training is far more agreeable than most games of this nature. The drills come in three levels of difficulty, each one offering more reward (if you are good at them) but also risk (as characters can acquire injuries from training too hard). Doing the easy heavy bag training for your punches means slower development, but you are less likely to suffer temporary or even permanent injury. Temporary usually comes in the form of a particular skill being worse during the next match, where as the longer term ones might mean you have less stamina or wind up with a chin that takes damage more easily. 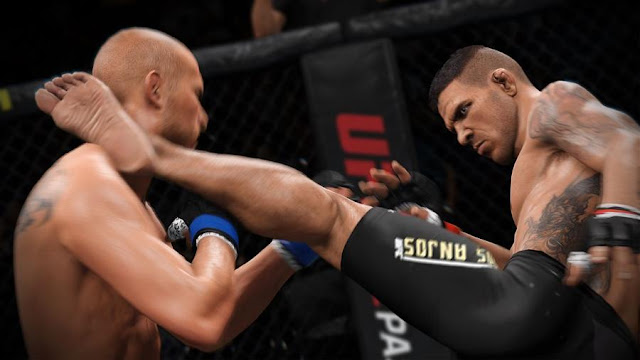 These permanent injuries are particularly noteworthy. They do not impact the immediate next match as dramatically as the short term ones, but your character will eventually hit the point where he or she has to retire. These longer term injuries push you to that point more quickly. You can put off retirement by hitting specific milestones in terms of your popularity, but in the end time conquers all and every fighter has to hang it up eventually. Along the way however, you earn experience points you can use to help add new moves and perks to your fighter, allowing your fighter to grow and improve in parallel with the training mini games. Another nice touch for the training games is that you can just simulate them with a press of the X button. It will apply your best score – so if you eventually get an A on the hardest difficulty, there is really no reason to put yourself through it again with that character. I really appreciated this bit of streamlining.

There are a plethora of other modes and options as well. Since this is an EA Sports game, they of course have a microtransaction option in the form of an ‘Ultimate Team’ game that relies on a pack opening system to supply your fighters with better skills and such. There are also quick matches, online options and customisable events. The roster of characters is also pretty impressive, from relative no namers to some of the biggest in the sport.

On the surface, this makes for a great deal to do. By and large there is, and the actual fighting is really quite interesting and generally well done (despite some occasionally odd glitches during the grappling system where commands do not ‘outline’ in yellow but still work). The biggest issue I have is the lack of ‘extra’ content – like a story or proper rivalry. The overall presentation is excellent, with sharp announcing, lots of music and really good visuals. We often refer to the ‘zombie-like’ look off characters in sports games, but my oldest daughter observed that most of the characters here looked far better and less zombie-like than other sports games.

While the sport does not have the same kinds of convoluted story lines as something like the WWE, I did come away from the career mode wishing it had just a little something more. I managed to get through two totally different career modes in one day. Now mind you, that was a long day of playing games, but I am used to career modes taking several days if not weeks to complete, but here I was able to just pound through lots of fights, train and wrap them both up in a matter of hours. Very little changes along the way either. Sometimes oddities pop up where you get bonuses or negatives to your training, or a rare challenge fight comes up where you can get loads of new fans but receive less training time. That is really about the extent of it though.

The lack of overall options and content creates a shallow feeling that EA Sports UFC 2 can never quite shake. It is more pronounced in the career mode, where there was perhaps the greatest opportunity to do something interesting with the source material, but outside of the original tournament the game never shows much personality in that mode. The same can be true of the other modes as well. On a technical level EA Sports UFC 2 delivers solid action (which is what counts the most in a game like this) and a great presentation, but it needs fleshing out now. I spent a few days with the game and have seen just about everything it has to offer. I am used to sports games pulling me in for weeks, maybe even months, but EA Sports UFC 2 is nearly tapped out after about three (admittedly very heavy) days of playing.