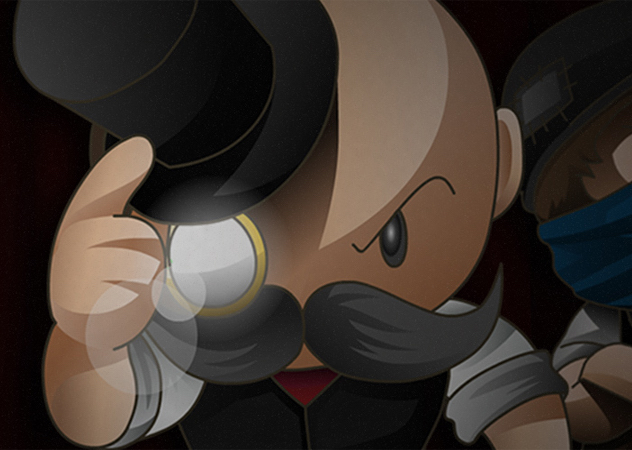 It’s been an utterly crazy couple of weeks in terms of game releases. Every platform has seen some seriously good stuff released on it, to the point where it’s actually difficult to keep up in terms of writing reviews etc for these games.

Writing the kind of in-depth pieces that I like to do actually takes longer than I think many people suspect. Frankly, I just can’t do it for every game that I play. And so, here’s my neat solution! Every so often I’ll do a series of short, sharp reviews of games that I have been playing, but don’t have time to do full reviews on. That’s not to say these games are of a lesser quality; as you’ll see below I really liked a couple of them! Rather, it’s recognition that there are so many great games coming out from really important developers and publishers, that otherwise I simply wouldn’t get to cover games that deserve a shout out.

And so, without further ado, here are five short ‘n sweet reviews for games that may just interest you.

I’ll kick things off with one of the more inventive brawlers that I’ve played in recent years; the Devolver Digital-published Foul Play. The concept for this game is so delightfully me that, even though I’m not a huge fan of the genre, I just had to check it out.

In Foul Play, your task is not only to beat up everyone you come across, but you need to do it in style, because you’re being watched by an audience. Foul Play’s concept is that you’re actually a performer on a stage, and unless you pull off your moves with enough verve and drama, you’ll eventually bore the audience, which is a “game over” far more painful than any running out of juice in an arbitrary health bar could ever be. 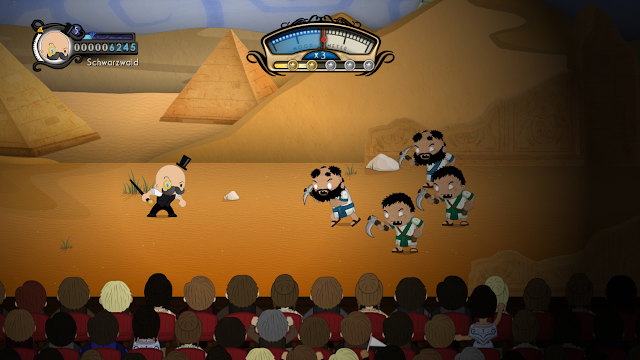 Though the game is a pure play brawler (albeit with really stylish violence and a stunning aesthetic and music score), the theme adds genuine flavour to the proceedings. People tend to forget, but Shakespeare himself was a populist playwright, and his work was filled with the old hyperviolence, sex and a bit more hyperviolence on top of that to get audiences roudy and cheering the actors on.

Foul Play taps into that, and while it would be inaccurate to say that it provides a commentary on the theatre experience, it nonetheless reminds us that performance is spectacle, and there’s some nifty fourth wall-breaking stuff in there just to cap things off. A truly classy, inventive game. I very much approve of this one.

Space Hulk on the Wii U is the definitive version, and is actually one of the better uses of the gamepad that I’ve come across. On the TV you see the board, classically rendered and a very close reminder of the board game that was part of the youths of many of us. On that board your characters take their turn, then the swarms of their enemies take theirs, in a tactics strategy-like experience until either you meet your objective of the enemies wipe you out.

On the gamepad though you’ll see the action from a first-person perspective of whoever you’re in control of at that point in time. Now this is really cool, and adds a really atmospheric touch to the whole experience; suddenly corridors are not just squared environments that are only wide enough for one marine to move down at a time. No, now you get a sense of the claustrophobic, Aliens-like hostile environment you’re trying to survive in against overwhelming odds. 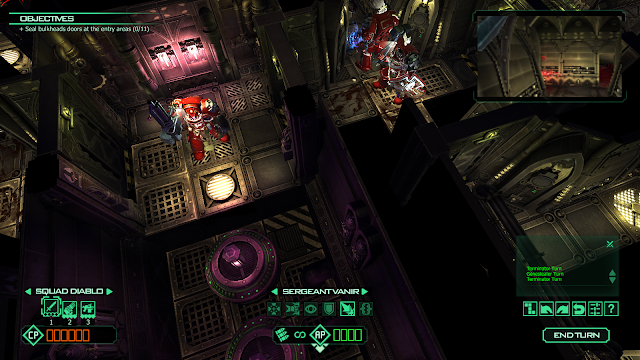 There’s a lot of missions to play through, and the variety between those missions is adequate (however it is worth noting that as an older game there’s only so far the mechanics can be pushed, so repetition does set in). What really lets Space Hulk down is its dice rolls. In this game, you’re given a percentage chance that an attack will land. For enemies in the distance it will typically be 33 per cent, which will rise to 50 per cent if the first attack misses. The problem is that the number of times that my first attack connected suggested much lower probabilities than 33 per cent.

Of course I know how probability does work and that it’s entirely possible that I might just be unlucky, but my frustration nevertheless highlights a fundamental flaw in Space Hulk that the otherwise pleasing presentation can’t address; it’s a simple reality that it’s an old game, and success was almost entirely reliant on dice rolls. Modern board game design greatly de-emphasises the importance of dice rolls in favour of systems that are more predictable and strategic, and I’ve got to say that I much prefer this brave new world of strategy over luck that we have in our board games now.

Grumpy Reaper is one of those mobile-like games. You know, where the gameplay is broken up into nice, neat, minute-or-two chunks and at the end of each level you’re rewarded with between one and three stars, based on how you’ve performed? And how there’s microtransaction models thrown in there to make it that little bit easier to get all those stars.

The game itself is reasonably cute and charming. You play as a guy with a lawnmower who needs to make his way around levels cutting all the long grass in the level. Because that in itself would be dreadfully dull to experience, there are also enemies to avoid. Zombie enemies. Oh God, it’s another game that arbitrarily throws zombies into the mix. 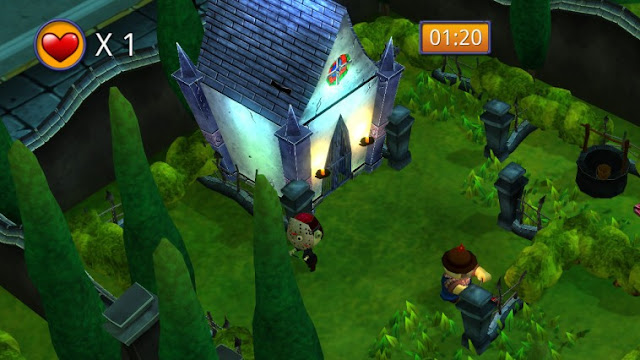 My overwhelming experience over the entire course of Grumpy Reaper is that it’s pleasant as a casual puzzle game. The mechanics are right and the action on-screen is easy to follow. The puzzles are designed in such a way that you’ll get to a point where you’ll need to replay most of them a couple of times to figure out how to complete them. The presentation is charming and the power ups are fun to use.

The problem is, of course, that it’s not necessarily a game that you’re going to want to play on consoles. I mean, it’s essentially Pac-Man, replacing pellets with grass and ghosts with zombies (though there are ghosts too). And it’s not like there’s anything wrong with Pac-Man, but after a while it’s hard to shake this feeling that, even on a console as starved for content as the Wii U is, you could be playing something else.

There’s something really cool about games that make level creation core to their experience. We saw it last year with Super Mario Maker that people simply love creating levels of their own, in their own vision of what they’d like to see in the games they like to play. And when you’re looking at a game as popular as Mario Maker, having players creating the content results in a game that offers unlimited replay value for people looking to play, as well as create.

Gunscape is like Mario Maker, only it’s a throwback to FPSers of the Quake era, rather than 2D platforming. And while it has nowhere near the community that Nintendo’s title does, Gunscape really deserves to find its own audience. 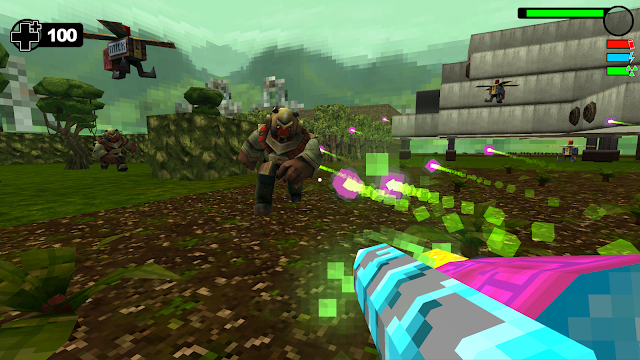 You’re able to create both arenas for deathmatches and single player or co-op levels with a story. The tools that you have access to do take longer to come to grips with than in something more simple like Mario Maker, but by the same token you’re not building games in Unity; a solid afternoon of playing around with the fairly robust toolset and you’ll be making fun levels easily enough.

My only recommendation is that if you’re coming to this looking for multiplayer fun, consider buying copies for friends too, because from day one the community for the game has been fairly limited. But it’s a cheap game, so even if you decide to stick purely with the pre-built levels the developers threw in with the base package, you’re still going to have a good time with this.

I’m not entirely sure why 2K Games decided to port an iPad game from 2014 to the PlayStation Vita. Perhaps the publisher had a quota to fill from a deal with Sony and this was the least challenging, relatively recent, thing that it had in its catalogue to stick on the console. But I’m glad it’s on the Vita, because as far as streamlined strategy games go, Civilization Revolution 2 is a good introduction to a great genre.

All the core basics of the Civilization formula are there – you’ll start out with a single city and a weak Warrior unit at a time thousands of years BC. Over the ages, right through to the modern era, you’ll expand by building more cities, investing resources in making scientific discoveries, and conquering rival nations. There are four ways to win – victories through developing science, the economy, culture and conquest – and each path to victory offers a distinctly different play style. 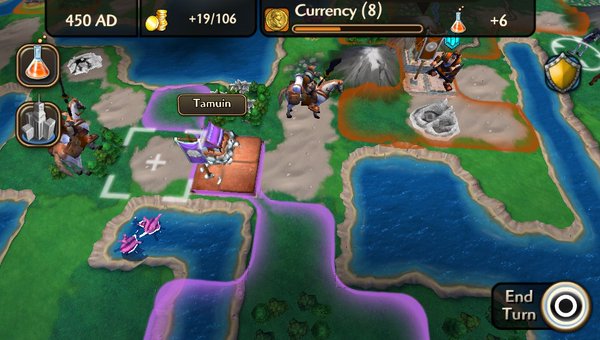 Also altering how you play are over a dozen different leaders to chose between, from Abraham Lincoln through Lenin, Napoleon through Nobunaga Oda, and each of these leaders have different focuses, be that on military or diplomacy. There’s a wide range of different units to build and the science tree has over 40 different technologies to research. With five different difficulty levels, and a bunch of scenarios to play on top of that (including some stuff exclusive to the Vita port), Civilization Revolution 2 Plus is absolutely loaded with content, but given that it’s possible to play through each campaign in a few hours, it’s never intimidating in depth or complexity.

It’s a far more streamlined experience compared to the Civilization games on PC, and that makes it good as a light hearted pick-up-and-play strategy game that doesn’t degenerate into free-to-play monetisation nonsense. The only downside on the Vita is that it looks terrible, with low resolution units and environments when compared to the glistening art style that we see on the iPad release. Nevertheless, it is one of the better strategy games that we have on the PlayStation Vita.