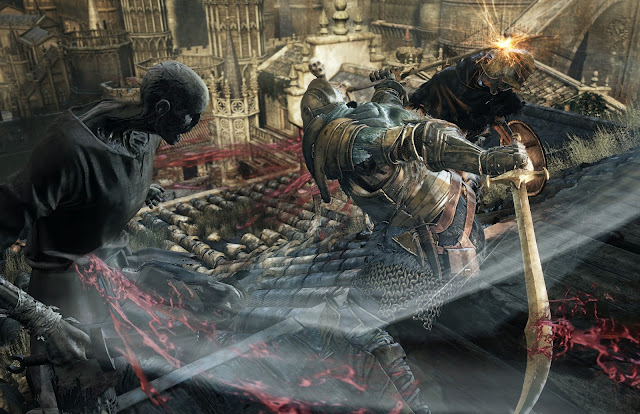 It’s difficult to quantify the effect that Hidetaka Miyazaki has on the games he touches, but there is a very real difference between a game that Miyazaki has worked on, and one that he has not. The games that he was directly responsible for: Demon’s Souls and the first Dark Souls, and well as the later Bloodbourne, all had a subtle but definite approach to design and story telling that distinguishes the games in the most imperceptible way to other action adventure games.
And for proof of this you only need to look at Dark Souls 2. A fine game in its own right, on both a technical and mechanical level, Dark Souls 2 nevertheless lost a great lot of its appeal because it wasn’t designed by Miyazaki. The level design lost its organic, winding, and ultimately believable nature, replacing it with a series of well designed, but ultimately arbitrary, dungeons. The narrative became just a touch too explicit to recreate the delightfully obscure appeal of its predecessors. Features like fast travel and an overwhelming emphasis on loot made everything feel too “gamey” for a Souls game.
But here’s the good news. For Dark Souls 3, Miyazaki’s back, and from the short demo I played, this is going to be everything that Dark Souls 2 should have been. 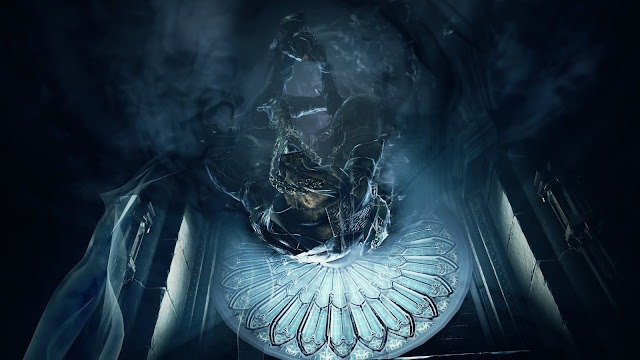 The demo dropped me into an outdoor area. There were bodies impaled on pikes, and there was a horrific groaning noise coming from nearby. I found the source after descending a series of stairs, where there were dessicated, pathetic beings grovelling before gravestones, as some skeletal monsters stalked around them. After dispatching those beasts, I made my way through a brief interior area, before coming to the ramparts of an old castle. I could travel across the top by ascending a stairway, or duck down a side corridor to stay low.
I started by ascending the stairs, only to have a massive dragon-monster land nearby and start toasting everything with fire. “Okay,” thought I. “This is nice and familiar.” I said this to myself because I remember there was a similar trick in a previous Miyazaki game.
So I figured I would take the low road, just as in the previous game I would make my way across the bridge that the dragon was protecting by navigating through its structures, and thus avoiding its deadly breath weapon. So I started to make my way down the lower passage, assuming that the dragon wouldn’t bother with me going that way. 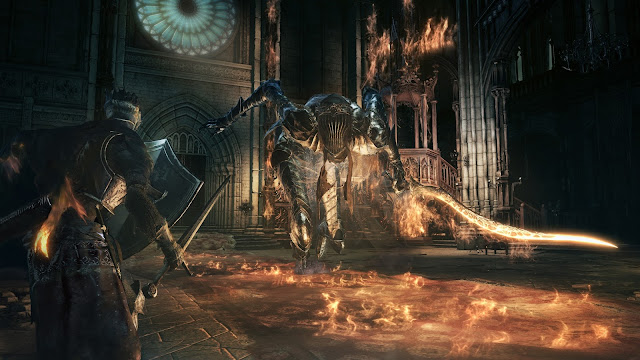 Seconds later I had been burned to a crisp. “Ooh, that’s clever,” I said to myself, and it was then that I knew Miyazaki was back. Dark Souls 3, based on the demo, looks like it’s a game that is intensely self aware. It knows that a lot of people that will play it will already be familiar with the series, and is looks like it has every intention on using that familiarity to catch players out with a knowing wink and a “gotya.” If Dark Souls 3 is your first in the series then you’ll be able to enjoy it for what it is. If you’ve already played its predecessors and Bloodborne, you may well find yourself delighting in the way it will mess with your mind.
I also found the aesthetics to be very interesting indeed. The section I played had a far deeper sense of horror and misery to go with the melancholy that has been traditionally so overwhelming in the Dark Souls games. In this way it reminded me more strongly of Demon’s Souls than anything else – an oppressive hell of barely constrained anger that too-often threatens to take over the dark serenity of the decaying gothic settings. I really hope the rest of the game follows through on this theme, because I do love Demon’s Souls more than a person should love a game, and after Miyazaki’s return to an edgy style in Bloodbourne, I hoping he resists the urge to settle back into the Dark Souls rhythm.
Of course, this is a tiny part of a tiny part of what the final Dark Souls 3 will offer. It could be a unique section, with the rest of the game lacking the same impetus. But I doubt it. Miyazaki has proven that he knows exactly how to keep his work fresh, and is one of the true arteurs of the industry. Dark Souls 3 is going to be great.
– Matt S.
Editor-in-Chief
Find me on Twitter: @digitallydownld
Share this