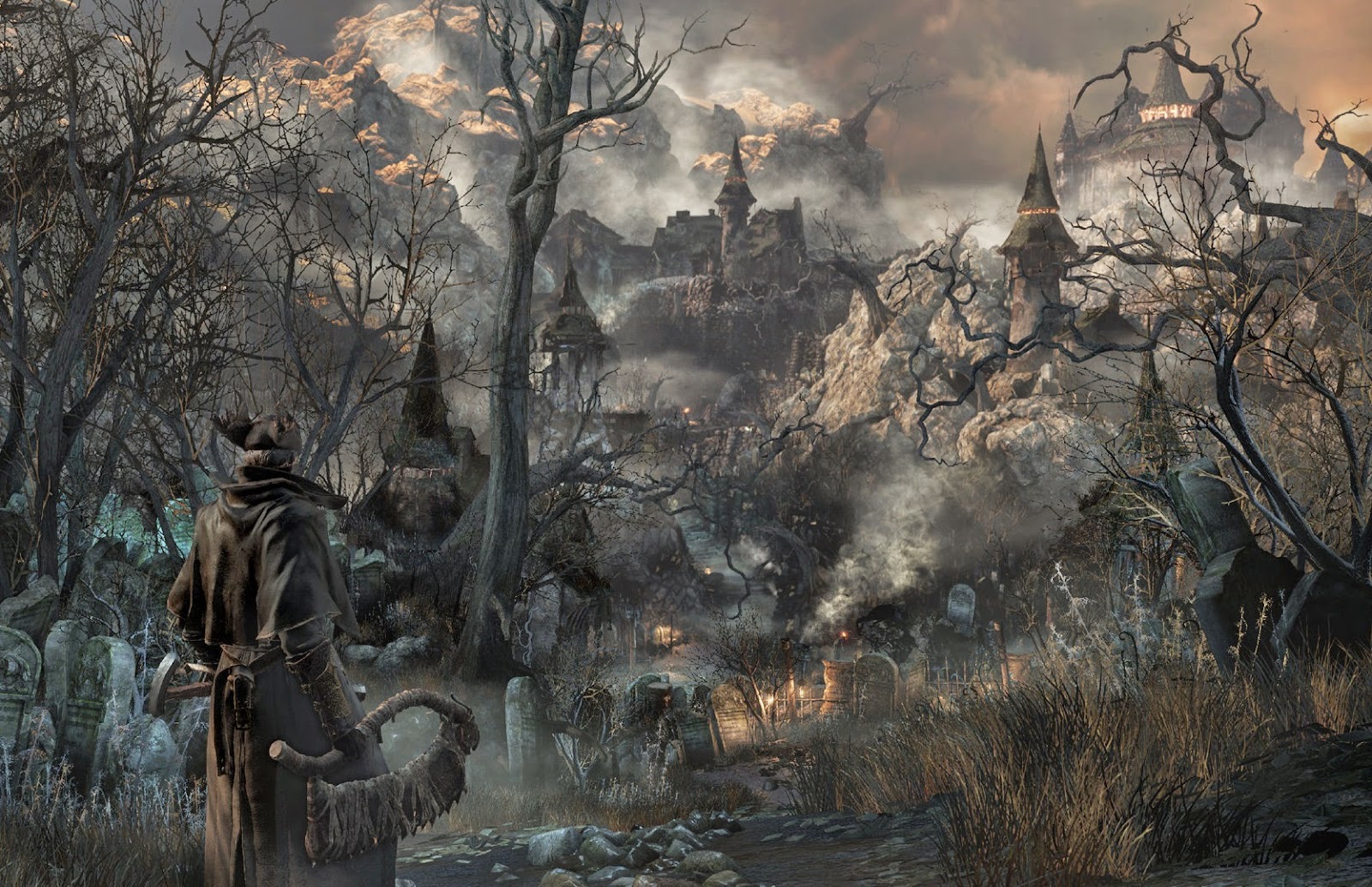 Bloodborne’s finest moments is in its first hour or so. That’s not to say the rest of the game declines in standard, but the statement is rather an acknowledgement that the first tentative steps into this visionary experience is one of horrible, wonderful awe. No game setting has been so striking and evocative as this one, and nothing has been quite as effective in hooking me into an environment as when I emerged from the tiny building my character started her adventure in to be confronted by a violently setting sun casting a waning light over a dilapidated, broken city.

Having played From Software’s Souls games in the past (and I do mean all of them… to this day I advocate for the King’s Field series over any of From Software’s later work), I basically knew what was going to happen to my girl in Bloodborne. Enemies would come at her from around corners, with barely a warning for what to expect. She would run into enemies that would be far too powerful for her, and if she could avoid them, she would need to come back to them later on, because they would surely be guarding some incredible loot.

And then she would run into boss creatures that were so incredibly powerful that it would take dozens of attempts to get past them. Bloodborne wears its heritage on its sleeve, revelling in its ability to teach players by killing their characters over, and over, and over again. 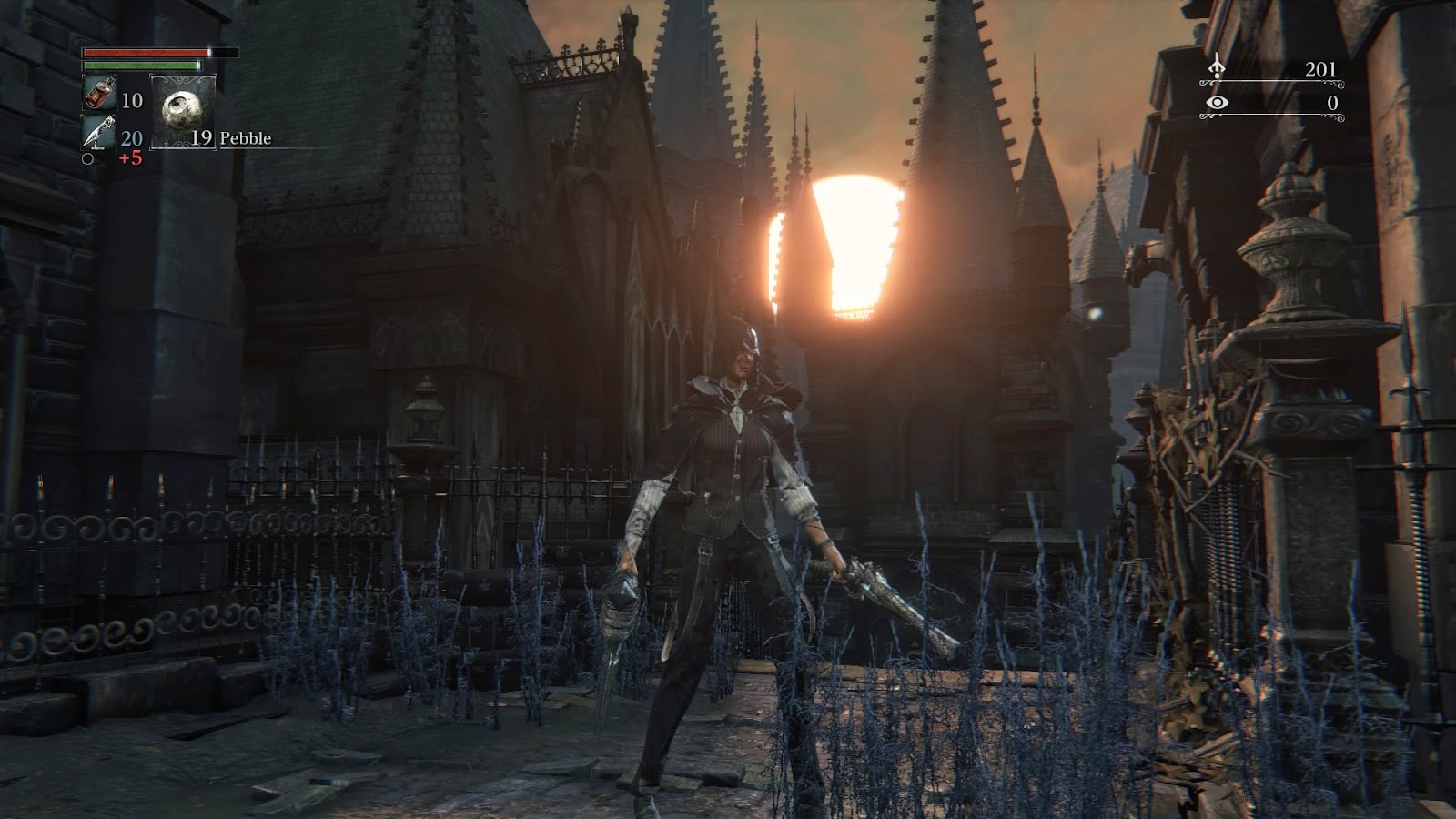 But what I hadn’t anticipated was just how original the Hidetaka Miyazaki and his team could be with that formula. Having enjoyed Dark Souls II, I had nonetheless thought the series was on its way towards decline, throwing in “gamey” elements like a greater focus on multiplayer and fast travel in order to streamline the experience and make it more accessible and thus engaging to a greater audience. But in Bloodborne Miyazaki goes right back to his core; Demon’s Souls. From a relatively peaceful hub world players are able to shop and level up using the currency they acquire from defeating enemies before delving back into level design that is labyrinthine and unforgiving in the extreme, just like they did in Demon’s Souls. Traps, short cuts, winding paths and secrets are abound, and simply exploring areas encourages a certian methodical pace to the experience.

This in turn allows Miyazaki and his team to tell a ripping yarn through environmental design and snippets of dialogue, rather than explicitly spelling things out for them. Very little will make sense at the start (and indeed the game emphasises that by falling back on the JRPG trope of having the player start the quest on a bed with no idea of what’s going on around him or her), but after he/she leaves the room and enters the streets, the environments begin to contextualise what’s going on by instilling a faint-but-growing sense of unease and disquiet, and the character will start knocking on doors and will have the briefest of conversations with the residents, and those conversations will explain things even further. Miyazaki has always enjoyed ambiguity in his narratives, and Bloodborne is no different; it manages to have a deep, complex story without relying heavily on cut scenes or dialogue trees.

Indeed, the power of the PlayStation 4 itself tells a story. The two Dark Souls games gave a sense of serenity through their aesthetics. A dark serenity, but the muted colour palette distinctly conveyed a sense of loneliness or sadness, and this fed into the melancholic narrative. Demon’s Souls before those games was a claustrophobic gothic masterpiece. But Bloodborne is angry, and has used the additional power of the console to reflect that. Cold, twisted iron and bark permeate bleak and dank architecture and cobblestone roads with such complexity and detail it would have been impossible on previous consoles. Even when later levels take the player away from the main city of Yharnam, the visual aesthetic remains remarkably consistent. It’s a vision of Victorian horror by way of Dr. Jekyll and Mr. Hyde and Jack the Ripper, and the sharp, gashing scenery drips with menace, reinforcing the fact that everything in this world wants to do your character harm. 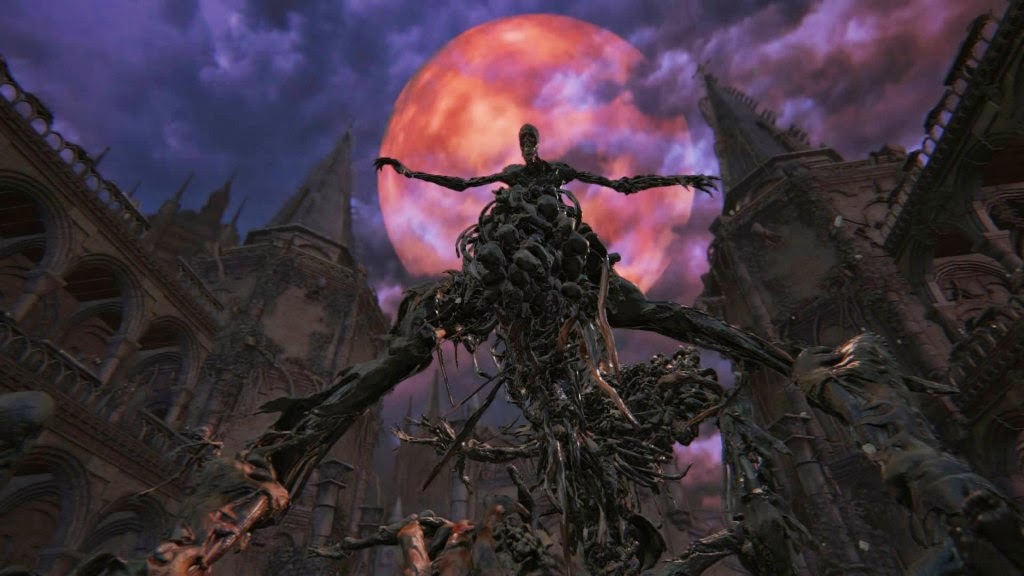 It is also far, far more violent than its predecessors. The Souls games took the high road, with the resulting reasonably bloodless and majestic combat a product of its high fantasy medieval design. Liberated of that setting, Miyazaki ratchets up the gore, splattering the player’s character after one combat, and then builds it further as the tension does. After a dozen or so fights the character is slathered in crimson; a faintly horrific sight of its own, when you consider that that is the rare splotch of colour that you’ll encounter.

Over time, this relentless visual theme becomes draining, and I wasn’t able to sit down and play Bloodborne for long sessions at a time. That’s not to say I didn’t appreciate the artistic direction, however, because it’s beautiful, in an unpleasant manner. The hulking monstrosities that you’ll be taking on are a vision in their own right, too, and after becoming worn down by boss battles that had almost become cookie cutter from three Souls games, the new setting has provided Miyazaki with a valuable opportunity to refresh the kinds of enemies that your character takes on, and as a result everything in Bloodborne will feel fresh, even for the veterans.

For people who haven’t played a Souls game before, you’ve surely heard of their reputation; that they are difficult. Bloodborne, as a Souls game in every way but name, is difficult. It’s a game that turns player death into an actual mechanic, and wants players to fail over and over again, especially with the boss battles. It wants you to fail because it wants to build a sense of insurmountable odds (which certainly fits in with the atmosphere of paranoia that was rife through Victorian England), and it wants you to fail because the sensation of overcoming those insurmountable odds is that much sweeter. So, yes, it’s possible to lose significant progress, but that’s the point, and I can only encourage that people don’t let it get them down too much. 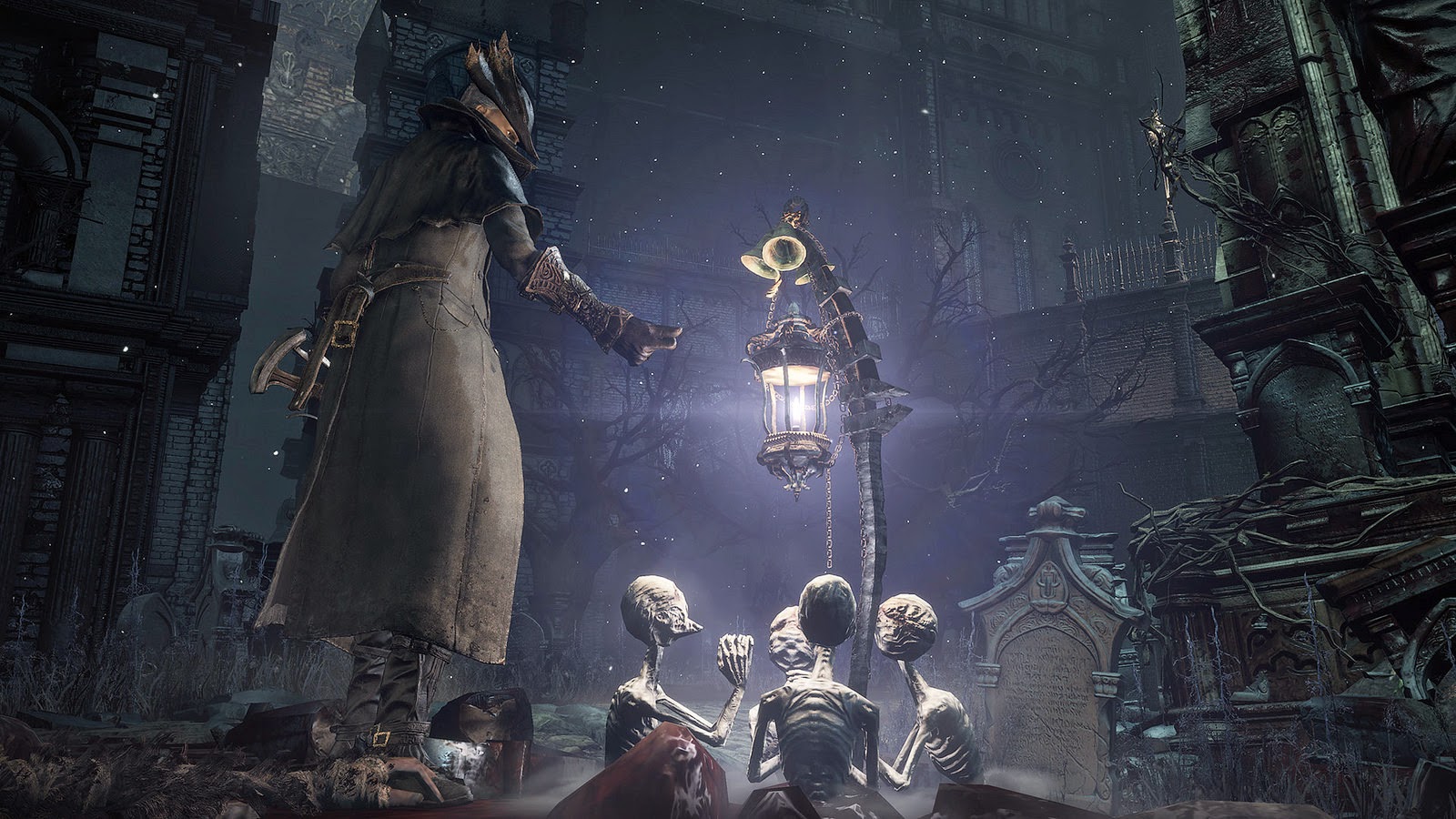 The combat is a touch more accessible than the Souls games, being much more focused on aggression and losing a touch of subtlety in the process. Player’s defensive options are limited – there’s a duck and roll, but the shields that formed such a core part of the strategy of each Souls game is replaced by the expectation that you’d be wielding weapons in both hands. Taking things one step further, if an enemy lands a hit on your character, you’ve got a short amount of time to hit it back to recover some health.

This system works, in that I did indeed find myself far, far more aggressive than I was in the Souls games. At the same time this made combat my least favourite part of the game, because I loved the tacitcal dance that was a Souls battle, and I found that Bloodborne’s combat was limited and scrappy by comparison. I’m certain other people will appreciate Bloodborne for that reason, but I wouldn’t be doing my job as a critic if I didn’t highlight a potentially problematic area for some.

Combat aside, Bloodborne is a visionary work by a visionary artist. Intense in both theme and application, it’s a gory concession to the tastes of the modern mainstream player, while maintaining the spirit and uncompromising narrative that was the hallmark of the Souls games at their finest. But this is far more consistent in that application than those games, making it From Software’s finest work to date.

DLC Review: The Evil Within: The Assignment (Sony PlayStation 4)

Let’s have a look at Omega Quintet’s enemies, shall we?