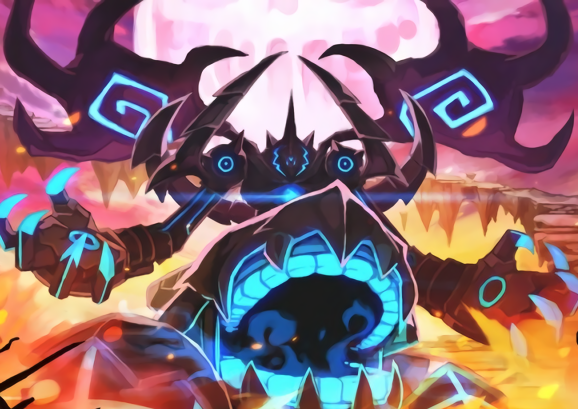 They often say that some of the most experimental and interesting content comes to game consoles at the start, and end, of their life spans. With the PlayStation Vita in its twilight, that idea is certainly holding true, because Trillion: God of Destruction is one incredibly creative little JRPG.

Related reading: The Disgaea series shares some narrative and aesthetic similarities to Trillion. On the PlayStation Vita, Disgaea 4’s the one to look at. Matt’s full review.

Coming to us from Idea Factory, the concept is suitably wacky. In the underworld an ancient and unbelievably powerful god of destruction has come alive, and is threatening to destroy everything in sight. The lord of the underworld, a supremely powerful being in his own right, and his equally powerful brother, take on this ancient being, only to be effortlessly slaughtered. So the almost-annihilated lord of the underworld makes a pact with Faust (Idea Factory games are never the most subtle with their references) to return to life long enough to see the destroyer destroyed, at which point he would hand his soul over and be gone for good, content in the knowledge that the realm will survive.

So Faust returns the lord of the underworld to life, only in a mangled, pitiful form. He can’t fight any longer, and instead it’s up to the lord’s harem of demonic generals to pick up the baton, train hard, and finally take on the god of destruction before he has a chance to destroy them all. The reason they do this (beyond survival, which they don’t seem to care about)? Whoever defeats the god gets to take the now-soulless overlord’s place on the throne. Yeah, they’re in this for selfish reasons, but what did you expect from demon lords? 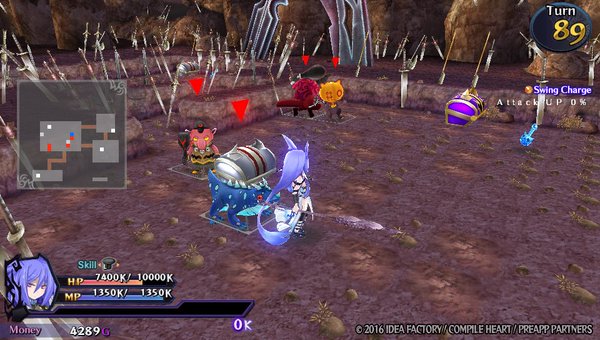 There were points in time that I actually thought I was playing a game from Nippon Ichi rather than Compile Heart. Though the art aesthetic is vaguely different to what we see in the likes of The Witch and the Hundred Night or Disgaea series, the actual thematic elements are eerily similar. The same irreverent humour that makes hell look like a happy place of fun and celebration we see in Disgaea is present in this title, with the penguin-like Prinnies being replaced with equally cute pig monster peons.

And as evil as the characters are meant to be, it doesn’t really take long for them to develop relationships with one another that is really quite fun, and almost sentimental. One early scene, for example, has the whole crew head out to drink and eat freely at a feast in a bid to lift all their morale at the thought of what is ahead of them. One of the characters gets crazy drunk, and the way she bounces nonsense off the other characters immediately had me in love with the entire cast. The personality archtypes fit neatly with the anime norms, but it’s a timeless kind of characterisation that works as well as always has here, and the gameplay side of things is so unique and interesting that the overall experience feels fresh anyway.

When I started playing this game I actually didn’t know that much about it, other than that it was an Idea Factory game, so I wasn’t to expect something entirely traditional. But, based on the screenshots I had seen I had thought it would be some kind of roguelike dungeon crawler, with the god of destruction the ultimate goal. But I was wrong about that. What Trillion actually is, is far more interesting. 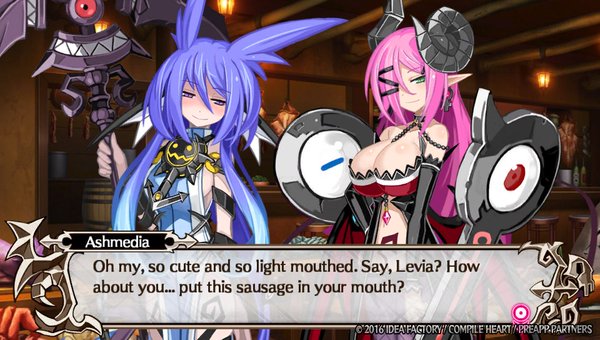 It’s actually a management game, closer in vein to something like Hyperdimension Neptunia: Producing Perfection. You’ll choose one of the demonic girls to train, and then you’ll be tasked with selecting for her one action to undertake each day. Most of these actions accumulate ‘points’ in a number of different statistics, which can then be spend to acquire combat skills or level up key statistics such as hit points, strength, defence, and so on.

There are other considerations than just training statistics up, though. Training also causes fatigue, so every so often the girl will need to take a rest, and it’s also important to spend time to develop the bond between the girl and the lord of the underworld (generally, by giving her gifts), as these bonds translate into vital health and magic power that can be used in the final battle, and the deeper the bond the more points are earned. And then there’s the ability to visit the blacksmith or minion creator, and occasionally enter a randomised dungeon to earn some loot and power-up items (this is where the roguelike element comes in, but at least five in-game days need to pass between each trip to the dungeon). All in all just one in a little over a dozen different actions can be taken each day, and while the idea is to balance out the training to develop the character in all areas, that is far easier said than done.

Unfortunately you don’t have unlimited time with which to complete this training. Ominously hanging over every action is a countdown clock, with each day ticking down until the god of destruction wakes up as it runs out. At that point it’s time to battle the guy. You’re not going to beat him right away. The reason the game is called “Trillion” is because this creature has a trillion hit points (yes, thirteen figures), and does enough damage in every single one of his attacks that your character is going to be wiped off the planet before she does the slightest bit of damage to him. That’s why there are more girls to choose from. The idea is that over time you’ll finally develop them to the point that they can take on the beast. 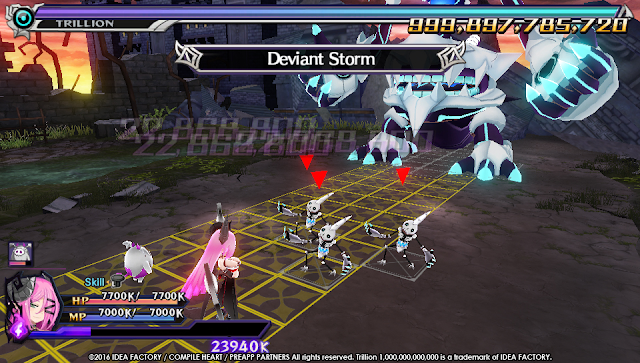 Idea Factory has regularly dabbled with the excess as a theme, with games such as Mugen Souls turning hyperbole and exaggeration into both aesthetic and theme. But Trillion takes this to an entirely new extreme. Because it’s a slow-paced and methodical turn based combat system (and more on that in a moment), it’s a more cerebral kind of excess, but there’s a genuine appeal in seeing six, seven, eight figures pop up on the screen to represent the damage dealt after each successful attack. And, even at the lowest of low levels, the regular enemies behave more like roadblocks than actual threats and single attacks will kill them. What Idea Factory has done so well here is that the team has created a system whereby the main enemy – Trillion – is a truly intimidating prospect, but at the same time you still get to feel like you’re in control of one of the genuine powers of the underworld.

Whether your hero is in the roguelike dungeons or squaring off against Trillion, the combat system is more like a puzzle game than a traditional JRPG. Though it’s turn based, enemies move at the same time as the player’s character, meaning you need to plan in advance for their movement (there’s not much AI to consider, given that they simply beeline straight to the player, but nonetheless getting out of a horde situation can be a challenge). Additionally, in the case of Trillion himself, attacks are highlighted in advance, by colour-coded squares on the map. These squares will shift from white, to yellow, to red before the attack will finally land, and if your character happens to be in the area then, it’s going to result in a whole lot of damage.

Combat becomes an elaborate chess-like game of using special abilities to dash across entire fields that are constantly under thread, from one relatively “safe” zone to the next, while trying to keep in range to do damage to Trillion, and also dealing with his minions. If you’ve ever played a bullet hell SHMUP, then imagine the same difficulty and requirement to dodge across an entire screen to avoid countless deadly missiles, and then make it turn based. That’s Trillion. 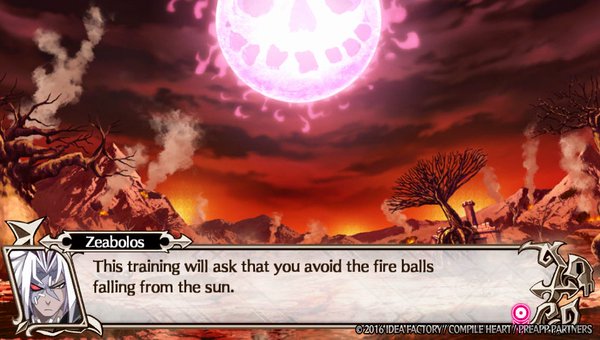 Though the entirety of the game is really focused on the build up to – and execution of – a single battle, it is one of the finest boss battles you’ll ever experience, and it’s wrapped up within one of the most unique character development systems that you will ever see in a JRPG. I never thought manager simulator mechanics would marry well with the JRPG genre. I’m happy to be proven wrong.

Related reading: Hyperdimension Neptunia: Producing Perfection is essential for people that like the management side of Trillion. Matt’s full review here.

Unsurprisingly, the reviews for this game are polarising. There are those that enjoy it for its quirkiness and originality, and then there are those that simply find it too different to really resonate. For my part I really appreciate what Idea Factory has achieved with this game, and, while the theme is quite dark, it’s presented in that same bright and cheerful, satirical space that we’re so used to with this developer/ publisher that it’s charming and irreverent. It’s always nice to play games like that.

If you enjoy my writing, please consider backing me on Patreon. Your support will help me do a whole lot more!
Share this