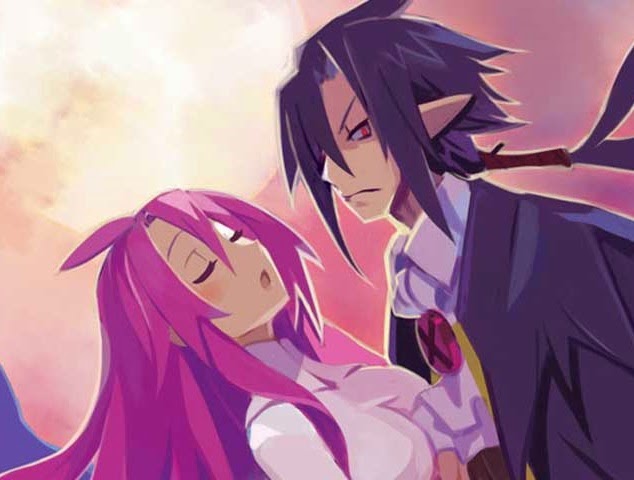 Way back when the PlayStation Vita first launched, one of the must-own games was Disgaea 3: Absense of Detention. It may have been little more than a remake and so didn’t really help the impression many had (and continue to have) that the Vita lacks “exclusive games,” but for a series that has always been a better experience on handhelds because of the pick up and play factor, Disgaea 3 on the Vita felt like the ultimate version of that particular game.

Two years later NISA has ported Disgaea 4 to the console as well, and it’s every bit as essential as its predecessor. In fact, it’s fair to say that most would find it the better game. For a start, it stars a fellow called Valvatorez, a vampire with an odd obsession with keeping promises and this leads him to start a rebellion against the government of the Netherworld. I know this is going to be an enormously controversial thing to say, because everyone has pet favourites where Disgaea is concerned, but Valvatorez is my favourite character from this franchise to date. Where previous Disgaea games have focused on various sometimes obnoxious “heroes” that have been obsessed with personal power (and obtaining more of it), Valvatorez has a somewhat more alturistic presence within the often messed up world of Disgaea, and this in turn gives players the impression that his story has some kind of greater importance to the fiction.

(Another Disgaea game woth considering is D2 on the PlayStation 3) 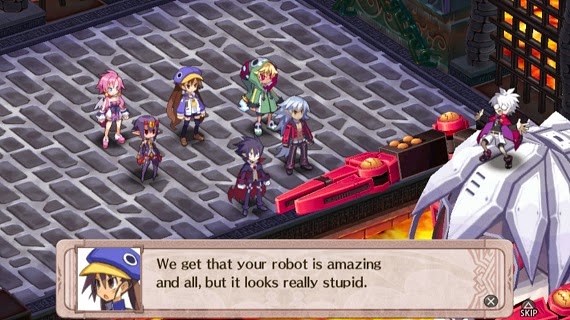 Comedy is, of course, still the most important part of the Disgaea narrative. In fact, I’d argue that some of the parodies are the most effective that we’ve seen to date, and the game sets off at a cracking pace. The way that a particularly selfish prison warden gets martyred at the end of the introductary chapter had me in stitches, because it resembles the kind of JRPG genre tropes that many veterans of the genre are becoming tired of. It’s a knowing wink, and one of the benefits that comes from making an unashamedly hardcore game for a specific fanbase – you can predict exactly how most players will respond to what you’re presenting them. In AAA-games developers need to assume that every single person on the planet will play their game because they’re trying to sell a copy of it to every single person on the planet. Disgaea 4 is happy to be a batty little game because the people that play it will be batty JRPG fans. And so the narrative is filled with nudges and winks, in-jokes, fouth wall-breaking antics and gentle ribbing at the game’s more serious stablemates.

Disgaea fans will already know everything that I’ve described above, and will be prepared for it, but it’s good to go in expecting excess if this is your first exposure to the franchise. Additionally, for the sake of people less familiar with the franchise: You don’t need to have played the previous Disgaea games to enjoy A Promise Revisited, but it you haven’t been exposed to enough JRPGs in the past, then you’ll miss a lot of the more subtle humour and references. You’ll probably still have a good time (because the game is too insane to not enjoy), but yes, it is a game built for the JRPG veterans. 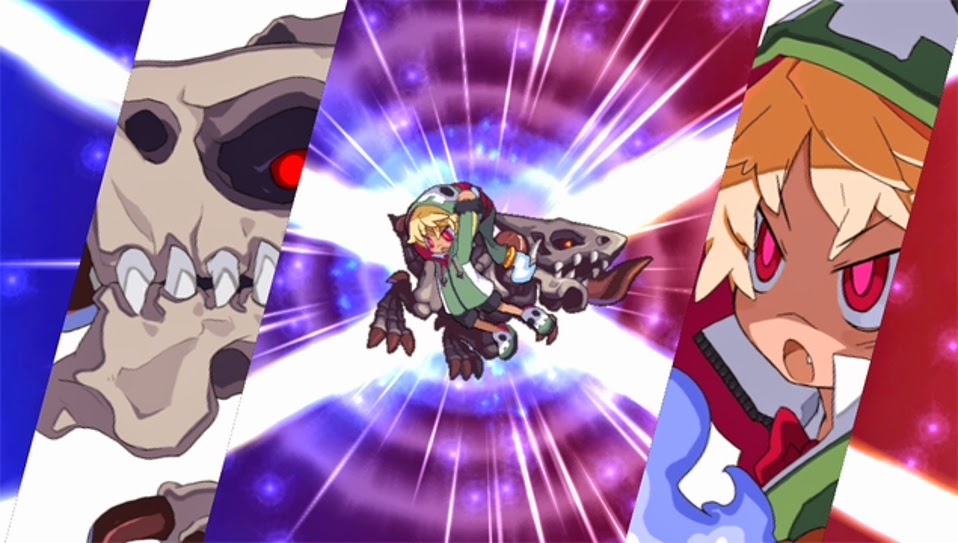 The basic gameplay of Disgaea games is well known now, but to recap for the aforementioned newbies: this is a tactics JRPG, where careful positioning of characters is key. When one character attacks, any allies next to him or her have a chance of jumping in to assist, and the more characters that join the party, the more powerful the attack. These super power attacks are great fun to watch, but players will also need to build their character’s individual skills for times where they need to fight alone, and this requires using those skills over and over again. Furthermore, players will need make use of the Geo Blocks and Geo Effects that litter the battlefield and can either help or hinder a character, depending on the colour of the block and effect. Positioning a character within a invulnerability square is a big asset, but charing into an area with a “no ranged attack” rule is suicide for an archer or magic user-type. But wait! There’s more to cosider. Players can also recruit monsters into the team, and then combine those in battle to create either giant, overpower monsters, or turn them into temporary weapon boosters for humanoid characters. Or they can fight as nomal characters to increase your numbers on the battlefield. It’s all up to you.

And, of course, where more RPGs stop character development at level 99, Disgaea 4 goes all the way to 9999. Does all of this sound overwhelming? If you’re new to the franchise, then it will be. If you’re a veteran, then it’ll be very familiar. In fact, it’ll be almost too familiar. Disgaea games come with new storylines and levels to fight on, but the core gameplay mechanic has remained relatively unevolved over all these years, and if I’m being brutally honest I’m not sure how many more games I can play in the franchise before I’ll crave something new from NISA.  As the series moves into the next generation (i.e, PlayStation 4), the developers will want to start thinking about how they can shake the gameplay itself up a little, which I’m sure is what they’re doing, but for now there’s only so many times you can march into a hundred-plus hour JRPG and expect to be doing the exact same thing you’ve done a dozen times in the past. 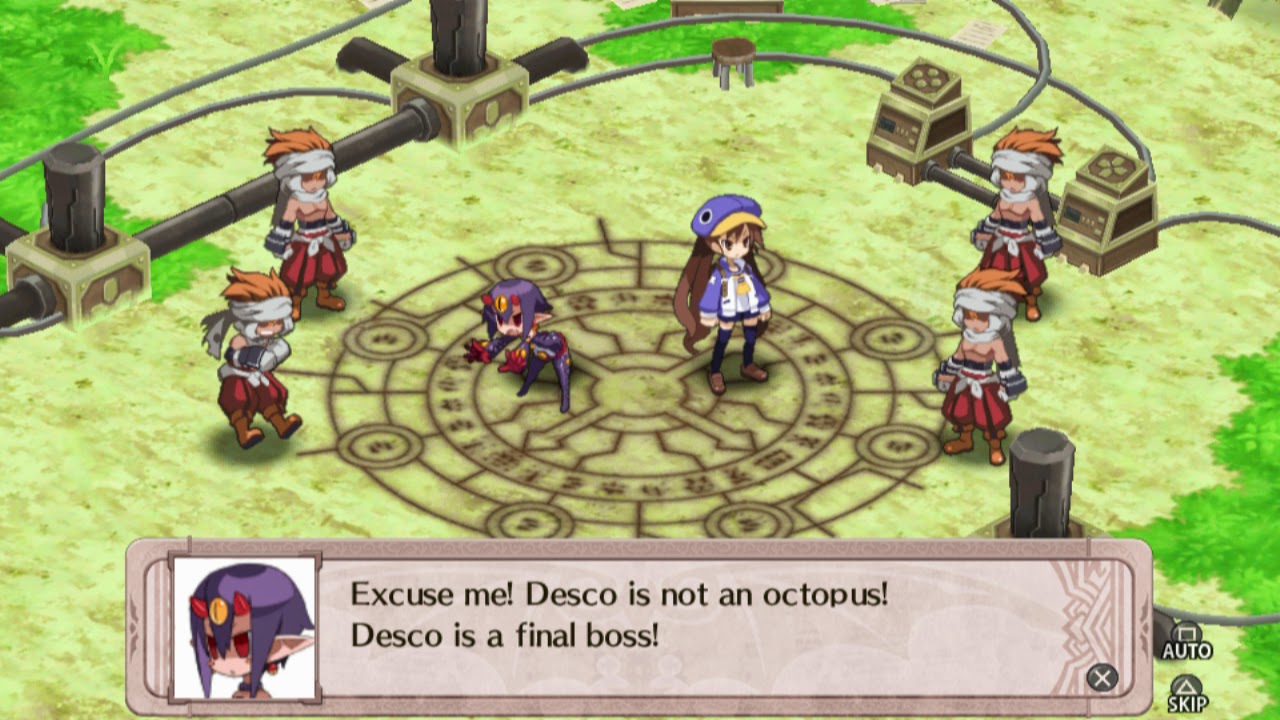 Personally, I’m not quite at that point we’re I’m done with the franchise. For now I’m happy to keep playing with the same system, because when it really gets going there’s almost unlimited depth in a Disgaea game, and building the perfect team continues to be a rewarding process. The sheer time commitment that a Disgaea game demands requires that it gets presentation right, and Disgaea 4 succeeds there without a doubt. The music is the same light-hearted and bouncy stuff that befits a largely irreverant JRPG, while the bold, colourful character designs are endlessly appealing. When there are a lot of characters on screen at once Disgaea 4 can become messy and despite having 360 degree control of the camera there are times where it’s impossible to quite see everything as clearly as you’d like, but as far as concessions go to having to deal with a small screen (as opposed to having a PlayStation 3 hooked up to a TV), that’s a minor one.

It’s worth noting that while it’s possible to level characters up to 9999, the narrative itself doesn’t last that long, of course. There’s a lot of post game material to work through, and this Vita game has all the various DLC bits and pieces that found its way to the PlayStation 3, making it the more complete package from the outset. Further, while the game might be slightly easier on the eyes in high definition on a big screen TV, the fact that levels play out so quickly makes Disgaea 4 a far better travel companion than a sit-down-and-play kind of game. This is never more evident than in the “Item World.” Disgaea 4’s biggest feature is a direct copy-over from previous games in the series: it’s possible for players to send their heroes into the “world” of any single item they have. There they fight through one randomised level after the next, with each cleared level adding more power to the item in question. In other words the item world offers a double boost; it powers up favourite items, and provides characters with additional battle experience. 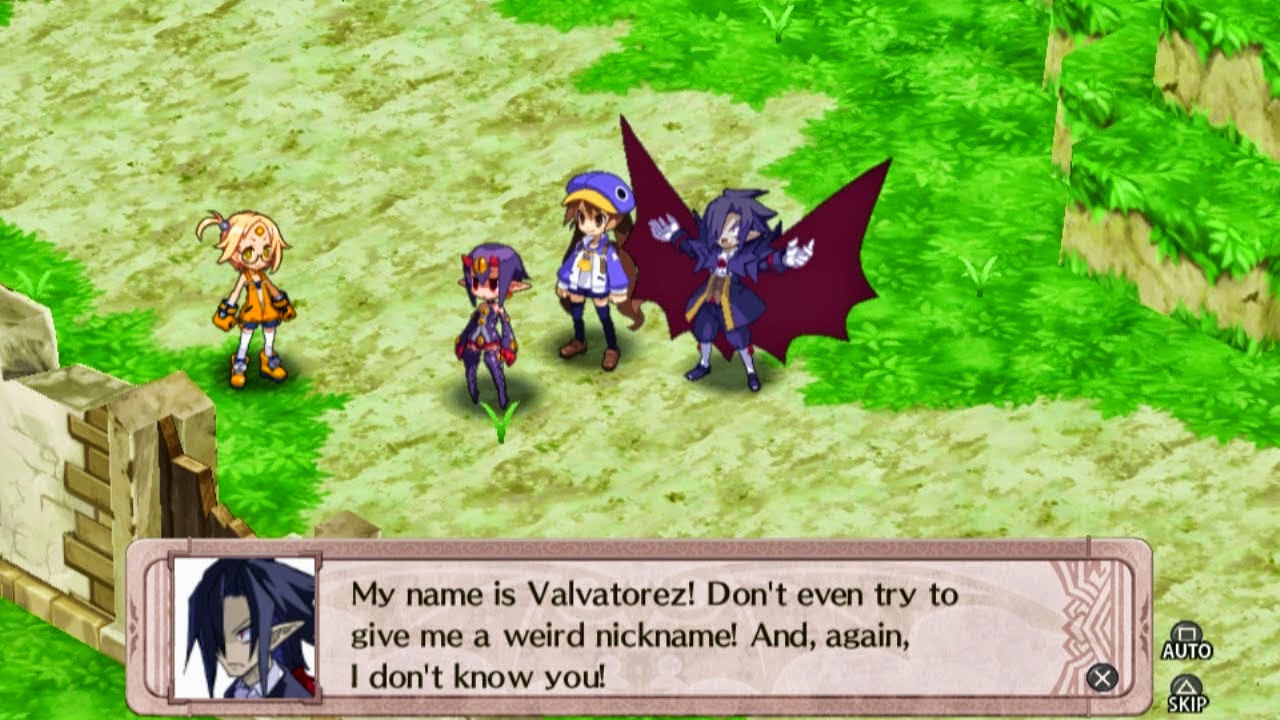 These levels are over very quickly, but can become repetitive over a long period of play. So being able to knock off a few levels while on the morning commute, and then put the Vita in rest mode to pick up again later on where I left off, is a significant benefit the the PlayStation Vita platform brings to the base game.

Disgaea games never set out to be deep and meaningful narrative experiences, and it takes a real time commitment to start reaping the rewards of the combat system of any of the games in the series. But they are irresistable and ridiculous, stupid fun once they get going. Disgaea 4: A Promise Revisited is the kind of game that can ruin sleep patterns and kill productivity. But it’s all worth it because it’ll keep you chuckling right up to when that favourite Prinny hits level 9999, dood.