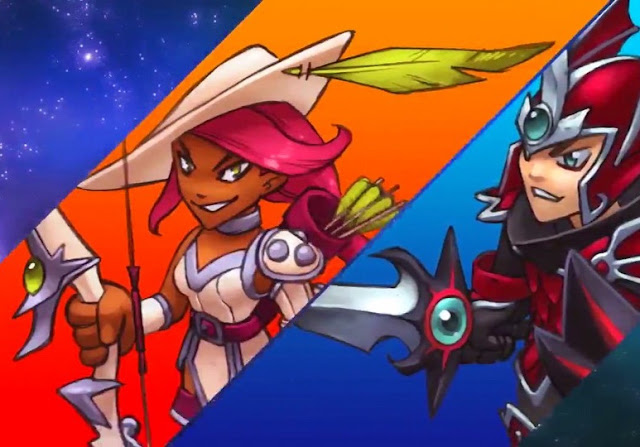 Rainbow Moon has been out for a few years on both Sony’s PlayStation 3 and was then ported to Vita. Releasing for the first time on the PlayStation 4, this hardcore grind-heavy tactics RPG experience is fully set up with cross-saving for those who want to dive back into Baldren’s adventure and help him find his way off a visually stunning, but very deadly moon.

Related reading: For a second opinion on the game, check out Matt’s review of the PlayStation Vita version.

Rainbow Moon is not an experience for people that find grinding to be dull. To get anywhere on this moon you are going to be doing an awful lot of walking around in circles fighting random encounters simply to get the experience level up to a minimum to overcome the next boss. Fans of retro RPGs will absolutely love it. People who remember grinding away for hours just to be ready to progress into the next dungeon in the original Final Fantasy, or people who have fond memories of what Dragon Quest would do to you if you ever dared use the “escape” command and miss a battle or two will be right at home here. For more modern players who like to work through narrative with minimal distraction, however, even when the difficult level is set to “norma” there’s no way around the frequent need to stop making progress and fight the same enemies over and over again.

So, if there’s anything ‘wrong’ with Rainbow Moon it would be that the story is so hidden behind the grinding that there will be times where you’ll be asking yourself “what is Baldren doing in this cave again?” The battles themselves can sometimes take a bit of time in order to work through, as they take place in a tactical grid format and have a sedate, plodding pace (and that’s even if you speed up the special attack animations). None of this is necessarily a problem if you’re the kind of person the game is designed for, but it is of niche interest and it’s really quite rare for games to have so little emphasis on narrative that people can forget why they’re doing what they’re doing as they play. 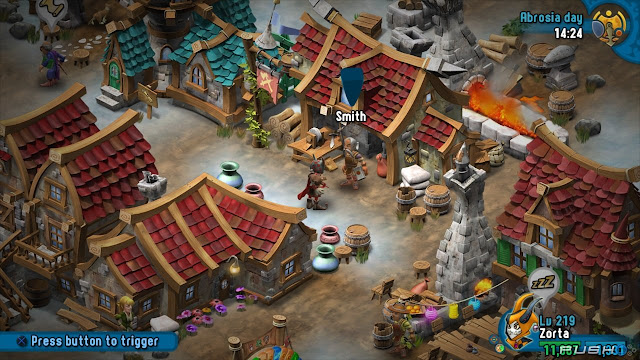 When it comes down to combat however, Rainbow Moon is a smooth and polished stone of punishment that leaves no room for error. While battles play out in a tactics RPG-like grid, where characters and monsters take their turns to move a set number of “squares” before taking on any enemies within range, the basic format remains the same as we’ve seen in almost every RPG ever. You’ll be defeating monsters, trying not to get your small band of heroes slaughtered, and levelling up while acquiring stones in order to further upgrade character stats.

Those stones are the most interesting part of the level up process. Each character earns the stones when he or she kills an enemy, and they can be distributed to the various statistics (strength, luck, hit points). There’s never enough stones, though, and on top of that, each category has a cap that varies from one character to the other. The speedy guys can’t have their health upgraded as much as the front line tanks, for example. It becomes an issue later in the game, especially on the more difficult settings, where characters hit their caps and are still not as powerful as they need to be for some of the enemies. Rainbow Moon knows how to be retro-difficult when it wants to be too. You’ll get to the point where you return to earlier areas where the enemies are easy (and this don’t yield much experience), but are quick to defeat, so you can get enough stones for each character to upgrade every statistic in order to have a hope at beating some of the greater challenges.

Defeat is an inevitability with some enemies – especially the first time you meet a boss and try to gauge how much more grinding is ahead of you to get your heroes to the point that he can be taken down. Upon defeat there are two options in order to resurrect. The first is to come right back in front of the foes that just about made you meet your maker and the second is to send you back to a specified point much further back. It’s a concession to modern gameplay, and a wise move by the developers – no one would want to grind for a couple of hours only to be defeated after a battle sours and a dreaded game over screen undoes those hours of work. 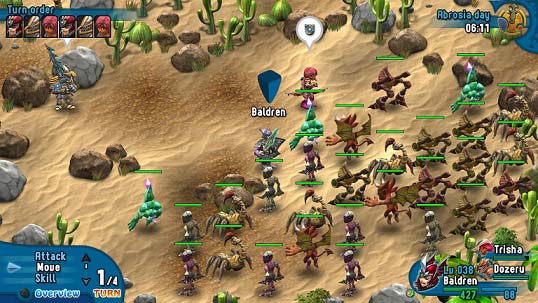 Another concession to modern game design is that “shops” and health restore points can be found inside of dungeons. It makes little logical sense for a healer to be sitting around in the depths of a dungeon, but it does help streamline progress through the game, and allows for dungeons to assume that players won’t be retreating, meaning that the dungeons can be longer and more difficult than if the shops and inn are back at town and need to be retreated to.

Related reading: A sequel to Rainbow Moon, Rainbow Skies, is coming, and it looks great.

Rainbow Moon is not a good choice for people who are looking for a narrative, but for fans of the old school, punishingly difficult, hardcore JRPGs, this is a nice throwback with an awful lot of raw gameplay behind it. It’s not so much a weekend buster as an entire holiday to work through, and as such, for its specific niche, it represents enormous value.