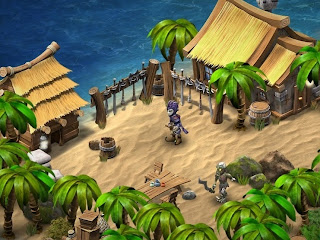 Are you a fan of old school RPGs that involve a load of grinding and not much else? Rainbow Moon is the game for you. I loved it back when it released on the PlayStation 3, and I love it that little bit more on the Vita.

The game hasn’t changed in any meaningful way in the transition to the small screen. It’s a little more difficult to appreciate the vibrant colours that was a big part of the big-screen Rainbow Moon’s charm, but in every other way the Vita game is every big as slick as its predecessor. Cloud saves even allow you to share the save file between versions.
However, Rainbow Moon is the superior experience on the Vita because the portability suits the short bursts of play that really is the ideal way to experience the game. As I mentioned at the outset, this is a game that is all about grinding up experience and fighting endless waves of enemies. There is virtually no plot, and those few characters that aren’t there to be killed will simply sell you stuff or point you to the next objective. Aside from those brief distractions Rainbow Moon is all about travelling to a dungeon (killing enemies on the way), and then working through said dungeon (killing enemies on the way).
I’d be lying if I said that people who didn’t cut their teeth on 8-bit and 16-bit JRPGs will struggle to connect with this game at first. The first couple of hours play especially feel very limited as the heroes and enemies alike have very few abilities and so combat tends to be quite straightforward. But after that introduction the game’s skill set starts to open up, and enemies have a greater range of strengths and weaknesses. For a game that is ultimately a tactics JRPG the speed of the encounters prevents any sense of boredom from setting in; a fight will start and be over in just a minute or two, and the rewards that are dished out are plentiful. The odd rare drop (which is often tied in with side missions) will also encourage players to fight the same enemies over and over again; there’s not much else to do in the game anyway (so you may as well engage in a spot of ultraviolence) and the rewards outweigh any sense of repetitiveness. 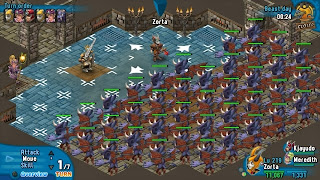 Yes, the developers have worked a Diablo-like loot system into Rainbow Moon that is sure to drive people with OCD tendencies crazy. Every new dungeon brings better loot and new rare drops from enemies that are often palette swaps (actually it’s crazy how few many base enemy models there are for a game with this much content), but it happens at such a rate that the game’s hours start to blur by and it never feels repetitive. Dungeons tend to be short and sharp and broken up just enough by rudimentary puzzles to keep players engaged.
Perhaps the greatest decision that the developers of Rainbow Moon made was to make random encounters optional. Wandering around an environment will trigger random encounters, but players are free to ignore those encounters if they’re not in the mood (or lack the resources) to take them on. Because the difficulty spikes quite frequently you’ll find yourself taking on a lot of those random encounters anyway, but in giving the control to the players that sense of frustration when marching towards an objective only to be slowed down by endless streams of enemies is mitigated completely. It’s an impressive compromise between the retro appeal that the developers were clearly keen to maintain, and the modern demands off players that don’t want to be hamstrung by archaic game mechanics.
There’s plenty of content in Rainbow Moon to keep you going. Not as much as you’d find in a Disgaea game, perhaps, but enough to keep you going for a few dozen hours. As a pick-up-and-play title Rainbow Moon is a better and more natural fit for the Vita than some of its other RPGs that demands hours of play at a time. Or, to put it another way – Rainbow Moon is a nice, relaxing RPG to flick on with a beer while sitting out on the balcony on a hot, lazy Sunday.

Microtransactions in retail games; Sucks to be sure, but what alternative was there?