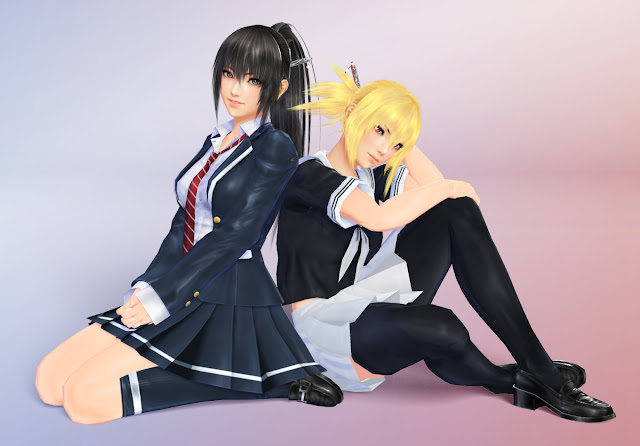 Here’s a concept for you, and it’s beautiful in its simplicity: a girl in a schoolgirl’s uniform, carrying an impressive sword, taking on hordes of enemies on her way to an eventual showdown with another schoolgirl. A superb martial artist, this girl’s abilities to leap around, ducking and weaving through the enemies as she carves them up. And because she wears a very short skirt that is so short that it would surely be banned at real schools, virtually everything she does gives us a look at her black-and-sexy underwear, proving once and for all that schoolgirls should probably change into something else before taking on hordes from hell.

Related reading: Onechanbara is also on the PlayStation 4, and it’s very much along the same theme as this one. Matt’s full review.

It sounds like my kind of game, right? The premise isn’t really that far from the Onechanbara series, replacing bikinis for a school uniform fetish, and since I’m right on board with Onechanbara, in theory I should be on board with Mitsurugi Kamui Hikae.

But I’m not, and that crushes me, because there is genuine potential in this game to be something I would love.

The first issue is that there is less storytelling in this than a Mr. Man or Little Miss book (Mr. Pervy is such a great idea for a Mr. Man book, I reckon). I can’t remember the name of the protagonist or her rival, but then again it doesn’t seem to matter, as aside from a quick introduction at the start, you’d be lucky if there was ten lines of dialogue in the entire game, so such trivialities as names are pointless anyway. Enemies come in hordes, sexy schoolgirl kills them, a boss appears, is defeated, and repeat ad nauseum until it’s game over.

Say what you like about Onechanbara, but it’s both self aware and knowingly silly, and at least puts in some kind of effort to establish a sense of character and setting. Other action games that play heavily of fetish themes – Lollipop Chainsaw and its cheerleader being a good example – offer legitimately strong narratives. Indeed, Lollipop Chainsaw was written by the guy who would go on to make Guardians of the Galaxy, the smartest of the Marvel films to date (and by a considerable margin), so there’s nothing about this genre that precludes quality storytelling.

Now you might argue that where storytelling was more core to those games, Mitsurugi Kamui Hikae is deliberately minimalist in order to keep the focus on the action. To which I respond that while I’m all for minimalist stories, there’s not a single example of a great minimalist story that lacked a strong narrative. There’s an incredible amount of narrative that can be built into games beyond the explicit story. The way an environment or levels are designed can contextualise the experience that a player has. Enemy design can have meaning onto itself. A character can have simple mannerisms that would help to establish him or herself as something more than a manipulable avatar. The philosophy underpinning the theme of game might be powerful. If you’ve played Limbo, you know what a good, minimalist story looks like when coupled with powerful narrative. So, if you’re not going to provide me with much by way of explicit narrative, then I do want to see the game that’s built around that minimalism to tell a story in itself. 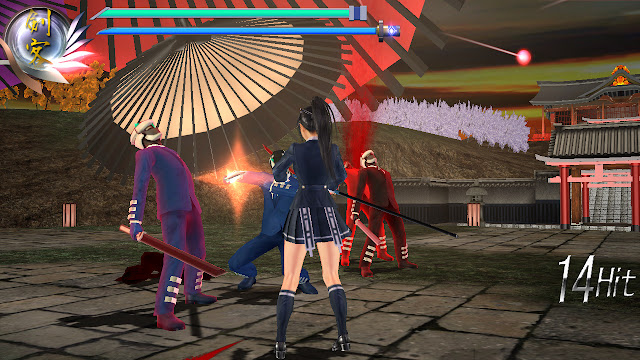 Mitsuruki Kamui Hikae does none of that. The environments that your schoolgirl will visit are really nothing more than a circular arenas that enemies pop out of and feature a meaningless series of backgrounds around them. There’s no level design to speak of – just that circular arena, and the closest the lead protagonist comes to having a personality is that she’s wearing black underwear. On a more fully realised character her taste in lingerie could have represented sexual confidence, but here it’s just something that flashes by, frequently, as she fights. I like sexy games as much as the next guy (or at least, the next guy that likes stuff line Onechanbara), but I generally lose interest when it’s not presented within context; because that’s the point where it crosses over into an unpleasant kind of objectification, as far as I’m concerned.

Related reading: Lollipop Chainsaw badly, badly needs to come to the PlayStation 4 as a HD remaster. A look back on the PS3 version.

In other words, everything about Mitsurugi Kamui Hikae is arbitrary, forced, and as a result, deeply unengaging. I can appreciate the developers spent all their time and resources focused on the combat system itself (and I’m getting to that), but it’s hard to forgive a game that in the PR pitch promised me was inspired by God of War and Ninja Gaiden, when in practice it shows no understanding that those games were so great because they offered a compelling narrative experience to go with the action.

But at least the action in Mitsurugi Kamui Hikae is good. In fact, it’s really good. There’s a good range of combos at our schoolgirl’s disposal, and she’s a powerful fighter. The game can be very difficult on the high difficulty settings, but at all times you feel like you’re in control of a lithe, graceful dancer, and that gives combat a nice flow to it.

Enemy AI is simple, but it requires some thought to overcome. Hordes tend to close around the girl in all directions, so it’s important to do a good amount of damage quickly in one direction, before ducking away and moving to counter closing enemies from the side or behind. Because enemies tend to be good at blocking basic attacks, you’ll also need to make good use of limited resources such as power attacks to break down defences and clear enemies.

The only real disappointment with the combat comes with the boss battles, and it’s minor; there was a lack of feedback to the impact that attacks were happening. The only way I knew they were even landing as the boss went through his attack routines was because I could see the health bar decreasing, and I shouldn’t have to be watching that bar at all times in a boss battle to know that I was whittling him down. But again, that’s a minor issue, and certainly I wasn’t disappointed with how the flow of combat in Mitsurugi Kamui Hikae worked at any point in time. 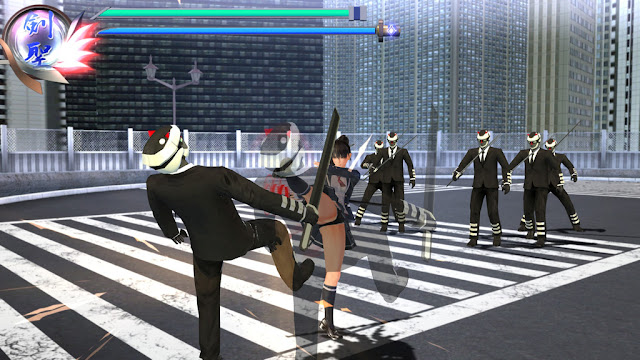 It’s all presented quite nicely, too. As mentioned, boss design is a real highlight, but the standard of animation in general is really high and this was important; the energy and dynamism that the combo system offered needed smooth, fast, enjoyable animation to complement it, and the developers succeeded there.

It’s also worth noting that the schoolgirl that you’re in control of is also very pretty and part of the reason I find the game so disappointing is that I would like to get to know her better, because I can easily see a scenario where, with proper characterisation, I’d enjoy her as much as Juliet Starling from Lollipop Chainsaw or Aya and Kagura from Onechanbara. It was the right idea dressing her in a school uniform because it’s a fun and sexy fetish theme to play with, in what is otherwise a dreadfully dreary world, but it really needed more done with it to work the way the developers (may have) intended it to.

It’s so frustrating, because Mitsurugi Kamui Hikae has all the makings of a game that I would love to play, but it’s only halfway there. In fact, it’s almost like a tech demo where the development team has come up with a brilliant combat system and has released that as a commercial project in the hope that a publisher will take note and throw them the money they need to make a real game next. 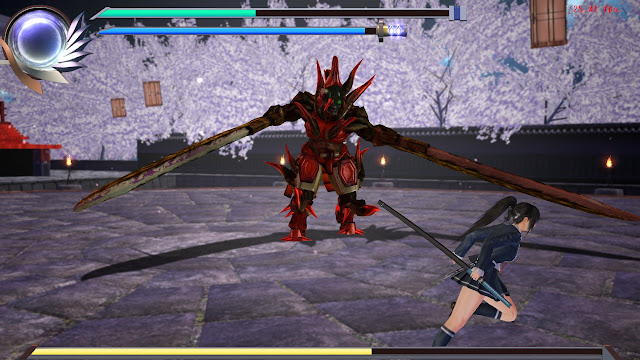 And I hope they do, if that was the plan. The talent is there to make something amazing. But trying to sell this game as it is feels like something a snakeoil salesman would do, and I’m simply not comfortable with that.