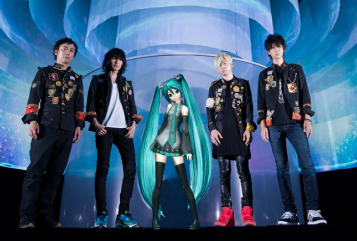 A bit of a boast piece here, but I do think that the article will be of great interest to DDNet readers. I’ve written an in-depth piece on the social implications of Hatsune Miku, virtual and augmented reality, and the idea of constructed realities. That article has been published today in The Australian newspaper – Australia’s largest newspaper with over 100,000 readers of the print edition, and millions of page views each day.

You can read that article by clicking here. Unfortunately, depending on where you are and the device that you’re looking at it from, it may or may not be paywalled. I can’t recreate the entire article below, of course, but here are some select paragraphs to give you the crux on what I was on about with it:

The crowd of thousands roar into action as she takes to the stage. Pumping green-coloured glow sticks into the air in rhythm to the music, they are lost within it, entranced by her singing and dancing. She is a best-selling artist, wildly popular with people of all ages and her concerts sell out in a matter of seconds.

That could describe a normal concert, but it’s far more interesting than that. What’s fascinating about Hatsune Miku is that she doesn’t actually exist in the physical world.

This converged world of the digital and the physical allows us to create spaces, environments, and people when the physical world doesn’t provide the “perfect” example of these things itself. But as this becomes mainstream, there might well be sharp social ramifications. Evolutionary psychologists, such as the University of California’s Donald Hoffman, are starting to question how we perceive reality, and the research suggests that when we alter the physical world by having it interact with the digital, we in turn alter our sensory experience of the world. In other words, the virtual becomes the reality.

The science behind the idea is complex, but the idea itself is not: cognitive science now argues that we perceive the real world in the same way we perceive what we see on a computer. It’s an interface. We don’t see a document when we open a Microsoft Word document. We see a large stream of 1s and 0s that our senses interpret as a document. Similarly, we don’t see a tree when we see a tree. We see something that our minds, through evolutionary psychology, have learned to interpret as a tree.

A central extension to that is the idea that, as we use these technological tools to alter what we see in the real world, we are literally creating a new reality around us. When Hatsune Miku appears on the stage, our only sensory interaction we have with her is through our vision and hearing, and to those two senses she is as real as when we see Lady Gaga take the stage. When Microsoft’s augmented reality technology, HoloLens, fills our rooms with Minecraft (a game about LEGO-like block assembly), our senses interpret this as a room filled with actual blocks to play with.

But on the other hand, evolutionary psychology also predicts that this will cause disruption to social behaviour. According to Hoffman, the ability to build the perfect world around us also makes it more likely that we will introduce something called supernormal stimulants into our cultures — and these can affect everything about the social fabric, right through to a nation’s birthrate.

Hoffman points to the Australian jewel beetle as an example of the impact that supernormal stimulants can have on a species. The beetle suffered massive depopulation because glossy, green beer bottles that were thrown on to the curb of the road were interpreted by the male of the species as an ideal mate, being both larger and glossier, but the same colour as the actual females of the species. So the male beetle would instead try and breed with the bottle.

According to Hoffman, humanity is geared to be as equally affected by supernormal stimulants introduced into our society as the beetle.

Anyhow, I really hope you’re able to access the full piece – it’s quite a long read and, well, I found it immensely interesting to write.

I do believe the convergence between the real and digital worlds is going to be a fascinating area of research, philosophy, and discussion in the coming years. It’s great being right at the forefront of that.