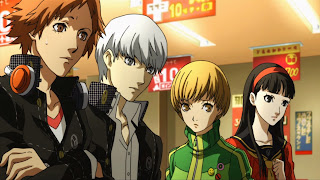 Persona 4 Arena took its sweet time to release locally because Atlus decided in its infinite wisdom that this game of all games is the one that was going to pioneer region locking on the PlayStation 3. With this game, the follow up to one of my favourite RPGs and Anime of all time, I was forced to wait an obscenely long time for even as my Japanese and American buddies were getting stuck right in. To quote an old Australian meme “Not. Happy. Jan.”

I was so pumped for a follow up to Persona 4 that it did not matter to me that it was a fighting game and so belonged to one of my most irregular genres. In the safe hands of the folks behind the rather excellent BlazBlue games I was expecting to enjoy myself even as I got slaughtered because I’m not that good at BlazBlue. What really appealed to me was the fact that Arena has a new story, beautiful 2D animation and a remaster of that brilliant score. Fighting game or not, this is a game I was greatly looking forward to. And Atlus made me wait. 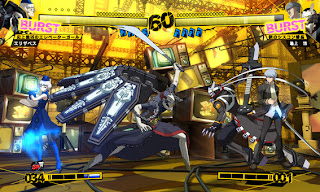 But that’s all in the past now. I’m here, playing Persona 4 and largely loving the experience. Here is a slick, fluid fighting game that leverages the lore behind a very deep JRPG very cleverly to keep fans happy while keeping things on the story and characterisation side of things simple enough for non-fans who picked up the game on a whim or because they are fans of the developer. It somehow manages to be both accessible for those with lesser fighting game skills (i.e me), and thousands of hours deep for veterans of the genre who want to play competitive online. The infrastructure backing the game is watertight; I played and lost plenty of online matches in reviewing this game and almost never did I come across slowdown and other such nasties that tend to ruin a technical fighting game.

Despite all the good I’ve just listed above, I did have some concerns with the game going in. The character lineup might be pulled from the brilliant Persona 4 lineup, but one of the charms of the JRPG was that the characters were simply normal people – no special fighting styles, no robotic implements, no silly weapons. This game was going to lose the social interactions between the characters, and I wondered how the developers were going to keep players interested when the were all the same “class” of person – human. 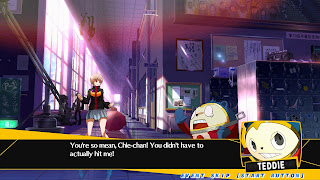 Thankfully the developers had resolved my worries within three seconds of play. The Persona summons are cleverly worked into the game as a risk-reward resource. By using Personas players can pull off some amazing, high-hit combo attacks that are as unique from character to character as anything in any other fighting game. But, should the opponent successfully time a counter while you’re doing a Persona attack, you’re going to deplete that resource. Run out, and it’s curtains (not really, you’ll continue to fight with the regular human attacks, but your opponent is going to have a massive advantage with Persona attacks left).

Because Persona 4 plays so lightning-fast players need to have some incredible reaction times to be able to not only execute their hero’s specials, but also read, predict and counter their opponent’s movements. What at first seems to be a button-masher’s paradise (and it is at first) slowly but ever-so-surely reveals itself to be a button-masher’s nightmare. Like a professional sport, someone who trains at this game daily is going to trounce someone who plays casually. I would recommend the once-a-week players stick with the offline modes for that reason.

As impressive as the combat is, what I really can’t get over is just how well this game took me back to Persona 4. In fact, I started playing the JRPG again after getting into this game simply because I felt a kind of homesick for it. The environments are spot on, the music is the perfect remix and even the menus have that wonderfully unique “yellow” aesthetic that is as recognisable as the red on a Ferrari.

Better than all of that is the character animation. Having just come from games like Injustice and Mortal Kombat which are great, but very stiffly animated (attack animation, reset to standing animation, super animation, skip a few frames to block stance, and so on), the way everything rolls together in Arena is like watching a cheap kids animation on Saturday morning TV, and then popping a Studio Ghibli film into the DVD drive. Considering that Persona 4 is a relatively simple game in terms of its character models and animation, seeing Chie fly through some spectacular kicks or watching Teddie bumble about in HD is a real treat for me as a keen fan of the game. In fact, everything about this game has been treated with a real sense of love, and while fans will love it from the outset, more impressively, this level of care will also convert someone who hasn’t been a fan in the past into one. It’s simply impossible not to love these characters.

I am not a competitive fighting game nut with a neckbeard (sorry, fighting game fans, I couldn’t resist that joke). I prefer my Dead or Alives to Street Fighters because, well, I like bikinis more than hadokens and as shallow as that is (and as much as I can appreciate that Street Fighter is the more rounded game), I really couldn’t care that I’m playing a “lesser” fighting game. I play what I like to play and even though Persona 4 Arena tests my limited fighting game skills more than almost any other game I’ve ever played, holy cow I’ve loved every second with this title.