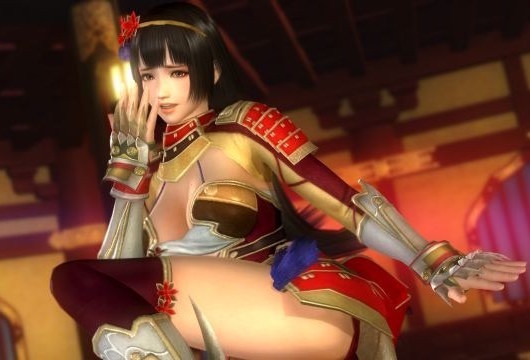 Years after Dead or Alive 5 was first released, Koei Tecmo is still hard at work at its flagship fighting game. Because it has had such an aggressive DLC strategy, Dead or Alive 5 (and the new PlayStation 4 version, Dead or Alive 5: Last Round) has been able to sustain continued development all this time.

Related reading: Matt’s review of Dead or Alive 5: Last Round on the PlayStation 4.

And now we’re getting a whole new character to play with.

Naotora Li will be instantly recognisable to Samurai Warriors fans; she’s one of the darlings of that particular series. She’s an athletic-type fighter, which makes her a natural fit into the Dead or Alive 5 cast… well, that and her figure is very much in line with the franchise’s mantra.

We have no idea how she’ll actually play, of course, but Koei’s been good about giving its new characters their own distinct style, so we’re looking forward to seeing how Li battles it out. She’ll also have DLC costumes herself, and, one assumes, she’ll be part of all DLC costume rollouts going forward too.

This here is why I have approved of Koei Tecmo’s DLC strategy for Dead or Alive 5 from the start. Yes, it’s expensive to buy all the DLC (and how the heck would actually do that, anyway?), but it’s because the game continues to make money as people like me buy costumes for our favourite characters that the company has felt like it was worth investing in the development of yet another character.