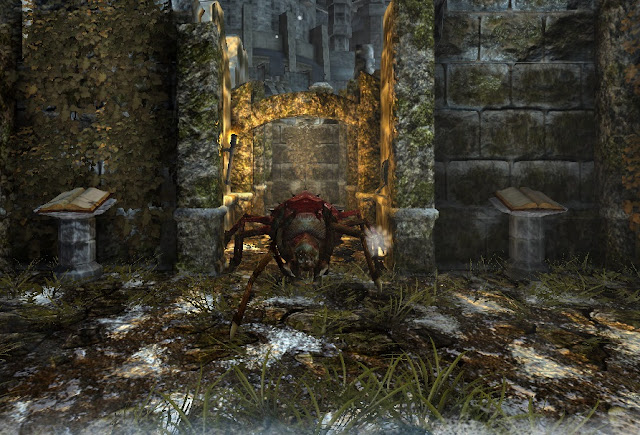 It’s easy for many RPG fans to forget that the roots of the genre lie in adventure games, especially considering that the two genres couldn’t be more different in the grand scheme of modern gaming. It’s rare for a modern RPG to truly capture the essence of exploration, which is something that Ruzar: The Life Stone does really well. Through a mixture of carefully designed environments, understanding of playstyles and sheer creativity, Hammer Glass Studio have created a first person dungeon crawler which tells its story through its world and really makes you want to dig deeper into the game’s locale.

Related reading: Another modern dungeon crawler that is essential is The Legend of Grimrock 2. Nick’s full review here.

Ruzar is a dungeon crawler similar to classic games like Wizardry and Dungeon Master, where the player explores a large labyrinth filled with monsters and traps from a first person perspective. Everything from combat to inventory management is done in real time, although the pacing is slow and rhythmic to allow for strategy and careful decision making. You’ll level up your character, find equipment and complete quests in order to progress in the game, hunting after the fabled Life Stone which is able to bestow unimaginable power.

Rather than turn-based “bump combat” which is common for more classic games in the genre, Ruzar opts for the real time grid based “dance combat” where enemy attacks can be avoided if you move out of their way. I find that Ruzar’s level design really pushes this system to its most effectiveness, as levels are designed with combat in mind. Standing next to your enemy allows them to get free hits on you, so combat is best done in a large open room where you have lots of different spaces to dodge to. Similarly, combat is much easier in a one-on-one scenario as additional enemies can easily move around into flanking positions. 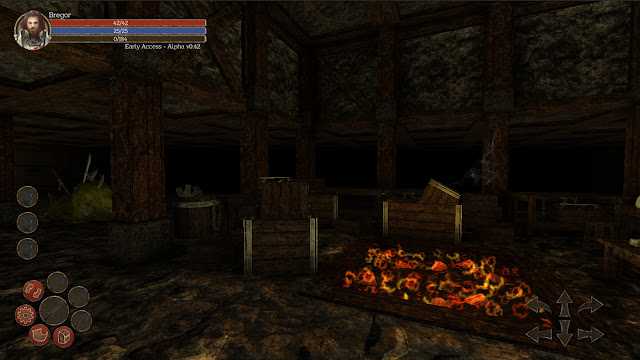 There aren’t a lot of enemy types and most of them can be easily dispatched by attacking, stepping back to wait out the counterattack, and then repeating. That being said though, Hammer Glass Studios works around this exploit by designing encounters that specifically hamper the player’s ability to effectively strafe the enemy’s attacks. There’s a very memorable setpiece moment in the early game where the player is drawn into the corner of a large room only to turn around to find that there are multiple spiders waiting in ambush – these types of encounters are where Ruzar’s combat shines and, at the higher difficulty levels, manages to test both your reflexes and your spatial awareness.

The combat is perfectly complemented by a variety of traps and mazes that players should come to expect from the first person RPG genre. Everything from pressure activated traps, trapdoors, locked gates and teleporters will stand in your way as you try to advance in the dungeons, and solving these puzzles are incredibly rewarding. It doesn’t take long for the puzzle difficulty to ramp up either, with some late game puzzles spanning multiple floors and involves moving between heaps of teleporters. The levels are designed really well and the puzzles feel like a natural part of each dungeon. Hammer Glass Studios did a great job at weaving puzzle solving and combat together, and players who are good at navigating traps will also have an easier time dispatching enemies.

What I particularly love about Ruzar’s story is the openness and the role of the player in deciding which direction they want to go next. Progression is not gated by completing a story chain of quests, as in most role playing games, but rather through locked doors passage deeper into the labyrinths. Keys are found in your exploration in chests and as drops from powerful enemies, and it’s your choice which door you want to use them on. You don’t have to have an NPC arbitrarily give you the key and thus permission to progress once you’ve done what the game wants you to do – your progression is entirely tied to your ability to defeat monsters and solve puzzles. Thus, quests don’t feel like a chore because they always give tangible rewards that aid in your personal adventure. It’s such a simple perspective switch which powerfully alters the way you play, leading to a much more enjoyable experience. 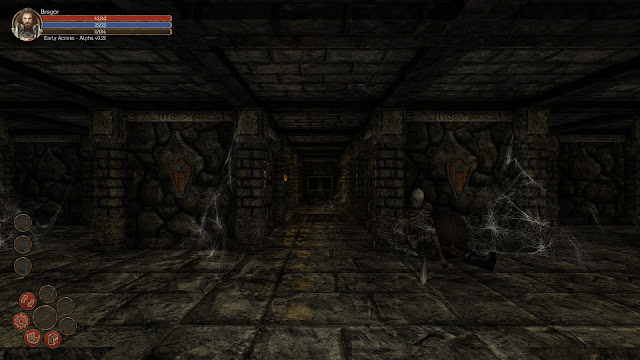 My main complaint is that, in order to capitalise on the sense of exploration, the RPG elements almost feel like an afterthought. There’s not a lot of different weapons and armour, and all of them feel pretty similar to wield. Melee combat is for the most part the best way to go, as ranged combat is a bit too resource intensive to be useful. Spells function mostly as ranged attacks with some basic debuffs attached, and skills are just some passive buffs that we’ve all seen before. It means developing your character is not expansive and levelling up doesn’t feel exciting. I understand that this works as a stylistic choice to keep the game simple and focused on the theme of exploration, but it means that players looking for a deeper RPG experience might leave disappointed.

Everything else is quite minor – the controls are not ergonomic and the attack button is tiny, the dungeons are silent save for monster sound effects and the wall decorations can get a bit repetitive at times. This is an indie title of course, so production values won’t be too high, though exploring dungeons in silence can feel a bit unnerving after a while. All of the monsters look fantastic though, with fluid animations and a real menace to their movements.

If the idea of truly great dungeon exploration appeals to you, Ruzar is a must buy. It’s rare that you see a game focus so deliberately on one facet of their genre’s appeal, yet Ruzar manages it and absolutely nails it too. Just don’t go in expecting a deep character building experience or a rich plot – you’re going in alone, and it’s just you against the dungeon.