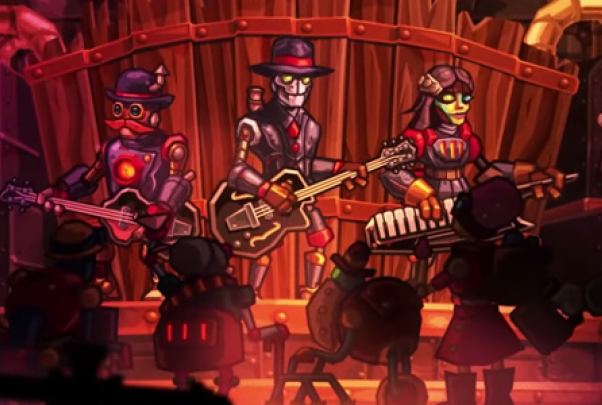 Image & Form’s SteamWorld franchise has been steadily growing into a quality indie IP. From humble beginnings as a simple, but effective tower defense title in SteamWorld: Tower Defense on the DSiWare downloadable platform, to SteamWorld Dig, which was a breakaway success across almost every platform out there, we now have SteamWorld Heist, which is the most ambitious title in the IP to date, and in many ways it is the best yet.

One of the things I have been waiting for from the SteamWorld series is a proper narrative and sense of world building. Image & Form have some seriously talented artists on the team, and all SteamWorld games have had a gorgeous steampunk aesthetic. But without the narrative for context I have always felt that all that effort had been largely wasted.

The good news is that Heist actually has a narrative, and it wasn’t what I was expecting. In the game, you play as a small crew of robot space bandits that find themselves unwittingly taking on the role of intergalactic heroes as they fight against some horribly nasty bandits, and then a corrupt, violent empire. It’s the kind of narrative that could have taken itself seriously. For example, there’s a monstrous boss that is building itself an army of revived scrap robots, which could have been a way to introduce a rich vein of heavy commentary around morality. Especially when you consider that, as robots, there’s room to have a discussion on whether the characters of SteamWorld Heist should even be held to the same standards of morality as they would were they human. 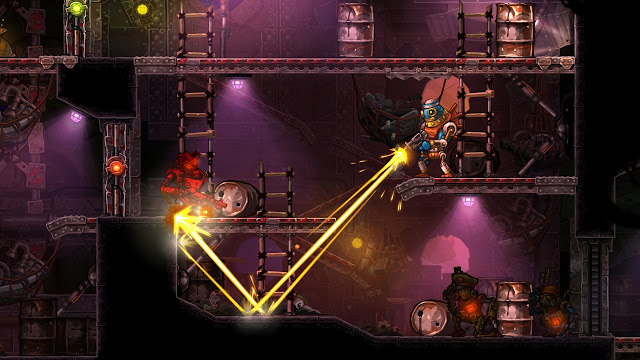 But Heist doesn’t take itself seriously. From the introductory video through to the various settings for combat and character interaction, it’s far more interested in playing up to B-grade science fiction sensibilities. I loved this – the story cut scenes that have a voice over straight from a bad 60’s science fiction film are hugely entertaining, and the various space bars that you’ll visit to gain mission information and weaponry are impeccably designed around that theme. And yet, at the same time… damn it, steampunk is a genre that does serious commentary so well. There are so few games that genuinely us the steampunk setting to the kind of effect that literature masters like China Miéville and Stephen Hunt do. As much as I enjoyed what I got in this game, the consequence of the game’s insistence of being lighthearted and comedic is that I am still waiting for SteamWorld to start realising its true potential for storytelling.

For Heist, that’s a bigger problem than in previous games, too. SteamWorld Dig was such a simple, pure game that it got away with a minimalist plot. But SteamWorld Heist is a much more complex game in terms of both mechanics and ambition, and it belongs to a genre with which there are some very high quality narratives, so it’s harder to look good by comparison.

Heist is, effectively, a 2D riff on XCOM. Leading a small squad of soldiers, players duke it out in turn-based fashion with small squads of enemy soldiers in multi-tiered environments that have barrels and other objects to duck behind for cover. The difference is that where, in XCOM, you’d simply choose an enemy to attack and the engine would calculate the success of that attack (based on factors such as concealment and distance), in Heist the player is also responsible for aiming the shot; having a shot hit an enemy is a result of skill, not statistics crunching in the background. Bullets can ricochet off walls and other objects, too, so if an enemy is particularly entrenched, it is possible to skillshot something miraculous off a back wall or ceiling to take them out. 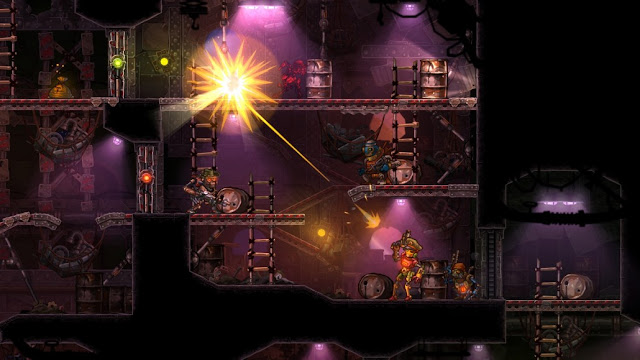 Each character on your side has a difference speciality – sniper, explosives, damage-soaking tank – and each gains experience through combat and can be furthered upgraded through a nuanced loot system that offers a lot of variety. The challenge is in choosing which soldiers to take into battle, as in most missions your squad size will be limited to just a couple of soldiers.

I wasn’t sure how this kind of strategy would work in two dimensions, as a big part of what made XCOM so effective was the ability to manipulate space as part of the tactics, but I was pleasantly surprised with the quality of the system that Image & Form has developed. Each character’s unique skills and the very different behaviour of, say, a sniper rifle when compared to a bazooka, provides more than enough of a structure to get really creative about tackling enemies. My favourite character was the scout, which was not particularly effective in a straight-up gun fight, but was fast, and did a lot of damage by hitting enemies from behind. His special ability allows him to move an obscene distance and attack, so picking the right time to send him behind enemy lines to take out a key enemy that had the rest of the team pinned made him incredibly useful.

All the good work in building the tight tactical mechanics that Image & Form did is let down a little by the AI, which is anything but smart, and will often miss easy shots by shooting directly at a character’s cover. I appreciate that the AI routines allowed for mistakes to be made, because that feels natural, and God knows I made enough aiming errors of my own, but the game is too easy – even on the more difficult settings – as a result. 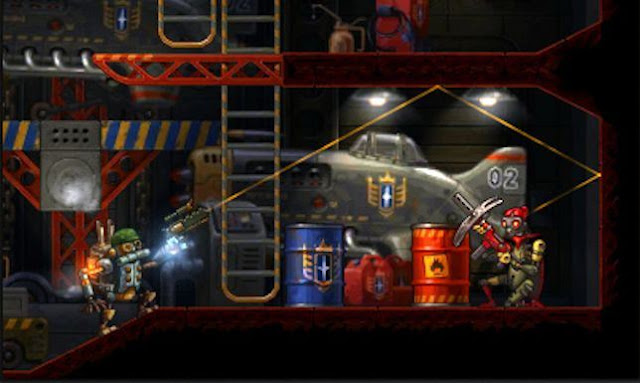 Environments are a little too repetitive, too. Each battle involves the team of heroes raiding an enemy ship, which is fine, but these ships all have the same kinds of rooms, filled with the same kinds of objects and enemies to deal with. Heist isn’t an overly long game, but it’s also not a short one, and there’s a certain drudgery that eventually sets in.

More than anything else, though, I badly wanted more from SteamWorld Heist, and that’s a reflection of the quality that’s already in there. I wanted more storytelling, I wanted more missions, and more variety in them. What’s there is genuinely entertaining – the kind of game that you will sit at for hours because it does a remarkable job in building the “just one more turn” compulsion. But there’s just not enough of it. Being left with a real desire for a much bigger game is certainly preferable than struggling to care about it at all, but Image & Form has been teasing us with the potential for SteamWorld for some time now, and while I hope this is a big success for the team, because I want to see SteamWorld continue to grow, I really need for the next game in the series to be truly ambitious.

A SteamWorld RPG, for example, would be nice.