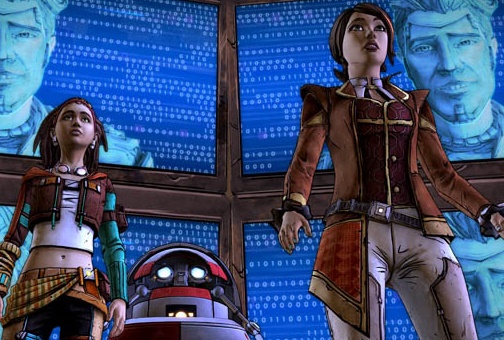 From the beginning, the idea of a Borderlands game as a narrative-heavy affair from Telltale Games struck me as a potentially weird mix. So here’s the thing: it worked. It worked so well in fact, that now we have the last episode accounted for, I can say that this was my favourite Telltale Games series yet.

In case you had not read my prior reviews on this series (which you really should, because they are so conveniently located here, here, here and oh yeah – here), the premise starts off simple enough, but it is immediately infused with the wacky humour found in the more action-oriented Borderlands titles.

Prior to this release and the Game of Thrones title, Telltale Games usually told narratives wrapped around a single character you controlled throughout. While the characters in Game of Thrones often occupied completely different locations and storylines, Tales From the Borderlands proved different because you swapped back and forth between two characters that spent time apart, but also time together. This allowed the story to cover considerable ground, but also put you in the shoes of two very different characters. We start with Rhys; a company man big ambitions that quickly had him in over his head, but are soon introduced to Fiona; a con artist looking to make a quick and big buck. 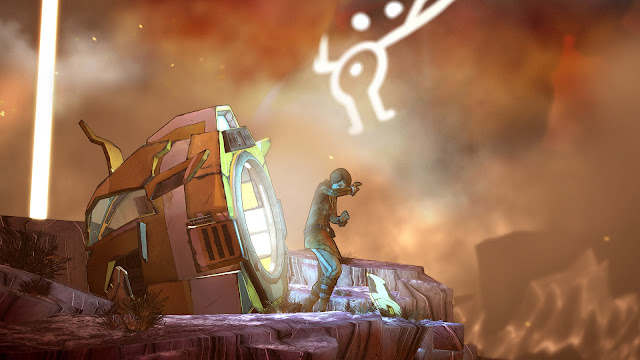 Fundamentally the two characters are the same. They walk, they talk and they interact with their environments. There are a couple of mechanical differences as well, in that Rhys can find items to use and explore the environment in a first person view with a mechanical eye. Fiona has a knack for finding money, and as a result she can purchase varying items along the way. These purchases are generally cosmetic, but I appreciated that the characters still had some unique characteristics.

The entire voice cast was exceptional, with some familiar actors and actresses filling the roles. Unlike the broody mystery of The Wolf Among us or the crushing depression that came with The Walking Dead, here the writers had a chance to develop a world with ton of crazy characters and entertaining lines of banter. Quite often Rhys and Fiona were telling their sides to the same story. Generally it was one character explaining what the other missed along the way, but when their tales did intersect, there were plenty of very funny moments where it became clear the game was providing unreliable narration.

This mechanic could have been overdone, but honestly I thought it could have been taken just a bit further. Often their conflicting versions of the story provided some of the biggest laughs over the five episodes, but by The Vault of the Traveler, the unreliable narration had effectively come to an end. While that could have been truly bothersome, I honestly did not fully realise it until the end of the game. Why? Because I was so caught up in the actual story’s events along the way. 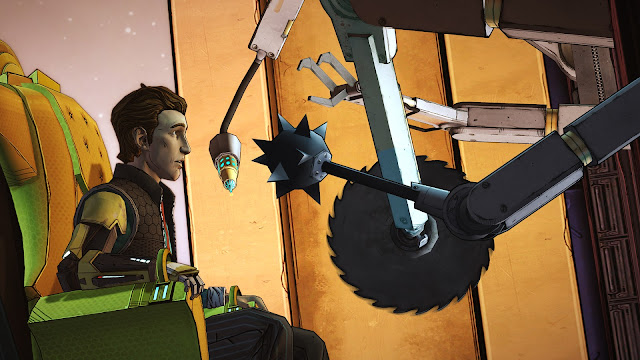 This fifth and final episode has some drama, giving you genuine concern for the well-being of multiple characters. There are still plenty of laughs to be had. There are some tough choices to be made as well. While all Telltale games are essentially a single primary narrative with some small branches that lead back to the core story, choice actually felt more prominent here than in some of the other Telltale titles. In particular was the endgame where you are comprising a team, and depending on your interactions with others, you may have burned bridges with potential comrades. There is also a mystery person whose services you can purchase. So ridiculous. So over-the-top. Good lord I was in stitches over his appearance, however.

Another novelty for a Telltale title is that there was a satisfying conclusion to just about every last loose end. Too often I have worked my way through to the end of the final episode, but come away frustrated with the tangents were left unattended. This is likely done to set up sequels, which I am more than happy to see, but it would be better if all of these compilations felt completely self-contained as well upon completion. I am absolutely hoping that we see more Tales From The Borderlands, but if we don’t, I am satisfied with how these first five chapters concluded.

Tales From The Borderlands: Episode 5 is a fitting end to this series. The storytelling did change slightly over the span of five chapters, but it continually took forward steps. Telltale Games has outdone itself with this series, delivering their most consistent effort from one chapter to the next. The end result is the best overall series to date.

Japanese cinema: A cultural export opportunity in preparation for the 2020 Olympics