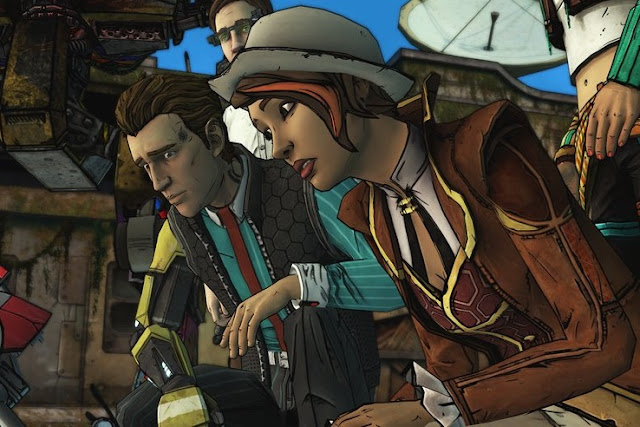 There has been a lot to like about the Telltale games, especially for someone like myself that tends to prefer narrative-heavy titles. That the team often uses source material that I am fond of and familiar with only makes me even more their target demographic. That being said, the nature of episodic games means that the quality of each individual episode can ebb and flow, and the latest episode in the Tales from The Borderlands series left me flat, despite some solid moments along the way.

I love reviewing these games. One of my friends asks me how I can come up with new articles for each and every episode, especially when I try to stay away from story elements that could serve as spoilers. Given that the episodes in these Telltale Games only tend to be a couple of hours or so long each, I suppose it is a fair question. My answer is usually boils down to how immersive the story was and if I enjoyed it.

In Tales From The Borderlands Episode Three: Catch A Ride, we catch up with our dual primary protagonists as they jump from one dangerous situation to the next. They cannot seem to catch a break, and this is fine by me as their incredible string of bad luck (how do they keep getting into so much trouble?) contrasts, often hilariously, with an unlikely run of good luck (they should all be dead by now at least twice over). 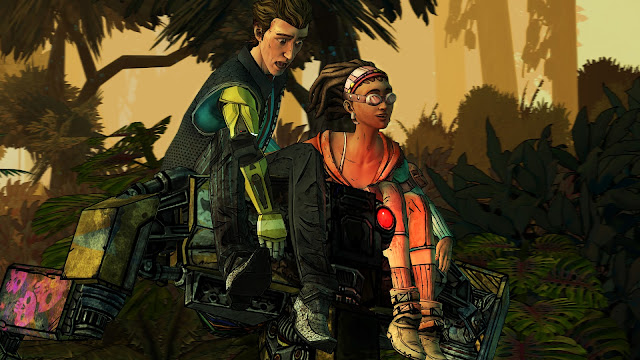 If you are familiar with the world of Borderlands, you have a pretty good idea of what to expect from the zany storyline, landscapes and characters. If not, this series has done a pretty good job of filling you in on the essentials along the way, and then getting out of the way so you can enjoy the story itself. As in the earlier episodes, you alternate control between Rhys and Fiona. Both characters are wonderfully voice acted, which really helps to keep you invested in them, no matter how poor many of their decisions turn out to be.

One of the primary storytelling tools from the prior two episodes was that of the unreliable narrator. It was funny to hear one of the two tell the scene from their perspective (usually in ridiculous, improbable fashion) only to have the other character inject their version of the events (which usually tends to be more grounded while painting their counterpart in a far less glamorous light). The mechanic worked well in those episodes, but sadly was largely abandoned here. There were a few moments where the technique was used, but not nearly as efficiently or effectively as we saw in the last two chapters.

Thankfully there were still quite a few very funny moments, and this is without a doubt the most light-hearted Telltale Games series since Back to the Future: The Game. While there is lots of action and plenty of jokes, there is also a good deal of heart and that starts to really show up in several of the characters. I could appreciate that we were finally digging into the characters more deeply than before. Unfortunately the plot itself does not fare quite so well. While the objectives for the first couple of episodes were all relatively clear, in this third chapter it sometimes felt as though characters were just running around because they did not really know what else to do. In usual Telltale Games fashion, the episode ended on a cliffhanger that promises some fireworks in the next instalment, but through the episode itself the storytelling was simply treading water. 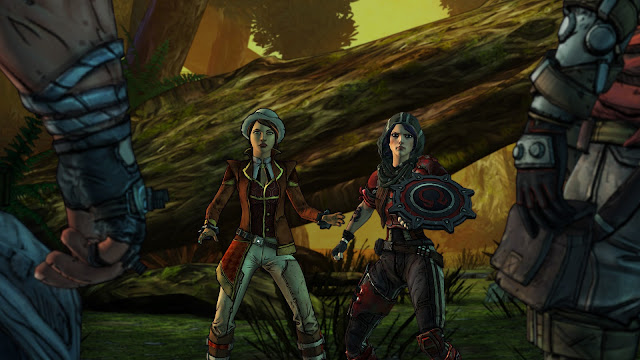 Another issue I had was the technical implementation. Telltale Games use an interesting artistic style that works for some people and not for others, but aesthetics aside many of the Telltale Games in the past were choppy and poorly optimised, and this is a more objective issue. This particular episode was arguably the worst I have seen to date. Part of the issue might be that the games are now being built with the newer consoles as the lead plaforms; for example, I have been playing the Game of Thrones titles as well as they come out, but they have been on my PlayStation 4 and performed admirably. This episode of Tales From the Borderlands has bad loading times, stuttering framerates and in general does not perform very well. This is a shame because it pulls out out of the otherwise immersive experience and reminds you that this is in fact a game. A poorly optimised game to boot.

The framework is in place for an exciting conclusion, and the characters are starting to grow quite nicely beyond their earlier impressions. Hopefully Telltale Games does not squander this opportunity, because Tales From The Borderlands Episode Three: Catch A Ride was something of a let down for me when compared to the last couple of episodes.