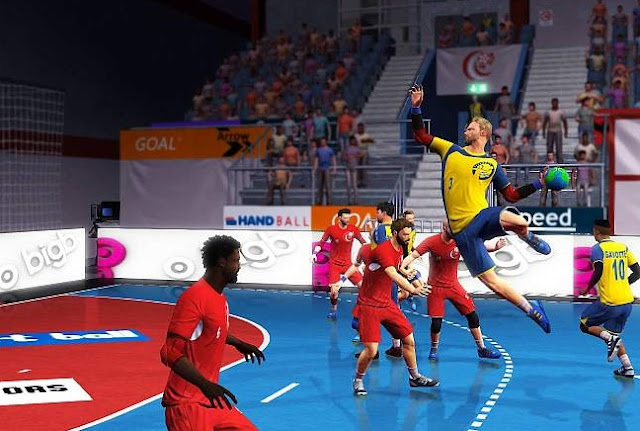 I really wanted to like Handball 16. As (as far as I can tell) the first attempt at recreating the sport through the videogame medium, and as a long-suffering fan of the sport (believe me, in Australia it’s as difficult to watch or play the sport as it was previously to find a videogame adaptation of it) this game seemed like the perfect opportunity to indulge my unrequited love of it, on both Vita and PlayStation 3; both at home and away.

Related reading: Another example of a niche game making it to videogames is Don Bradman Cricket. Matt’s full review.

It sounded good on paper too, promising a full career mode, fully licensed teams, and so on; the full range of features that we more-or-less expect in our modern sports games. And once I started playing, I realised I still wanted to like Handball 16. It seems like a truly earnest attempt to do the sport justice by a tiny team of developers, and for that reason alone I want to support the game in the hope that we can see the developers continue to work on it to the point where it’s a strong sporting franchise in its own right.

This is what real handball looks like in action.

As promised there is a career and season mode, but aside from a ‘friendly’ one-off match, these are literally the only play options. No online, no card collecting “fantasy football” modes, nothing. It’s very cold and Spartan experience to load up the game that costs close to the full price for a retail game and be presented with menu that has just three tiles worth of options, when the AAA-sporting titles such as FIFA or Madden have pages of them.

Of the modes that did make the cut in Handball 16, there is very little to differentiate them. The career mode has you creating a character, which you won’t really care about, because the character models are so blurry and unattractive that they look like something from a PlayStation 2 game, and moving them up the ranks by starting at the lowest quality teams, but earning points and improving their quality as a player until the better teams take note of them. The season mode does what the name suggests and allows you to take a season from start through to finish.

But I really struggle to tell the difference in quality between players and teams, immediately dropping my level of engagement in them. Each player has their own individual statistics, but aside from endurance, the effect that these statistics have on what goes on are either too subtle to notice, or simply not noticeable. For example, as I was learning how to play, I was taking a five-star team and pitting them against a 1-star AI team. I was getting beaten because my team’s statistics were not giving me the cakewalk I should have had on raw statistical numbers. I find myself winning now, but that’s more a consequence that I’ve learned how to deal with the game’s mechanics. Higher starred teams are certainly more difficult to defeat, but here too it’s like each player has been scaled equally in difficulty, with little to tell one player from the next. 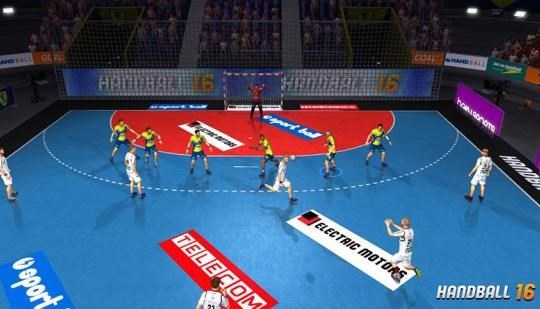 It’s a stark contrast to other sports games, even those of niche sports like cricket, where each player has their own identity thanks to a set of individual statistics that give them distinct characteristics. In Handball 16, while it’s officially licensed, fans of the individual players will really struggle to recognise their hero from the others.

On the play field the action is a mess. Handball is the fastest ball sport in the world, and if you ever see a real game of it from top-flight professional teams in Europe, you’ll be absolutely blown away by the flow of the game and the athleticism on display. Handball 16, as a first pass at the sport, was probably always going to struggle in capturing this raw speed, but unfortunately it struggles mightily. Player movement is clunky and animation sequences are locked, meaning that quick changes of direction are not possible, outside of pre-set button combinations to pull off fancy moves. Transitions between plays are woeful, with players standing around a loose ball as though they were playing a game of croquet, not a competitive sport like handball. And the lead shooter on the teem (any team), has an annoying habit of standing in the goal keeper’s ring, resulting in an instant turnover if you should pass the ball to him.

Finally, aiming when taking a shot is incredibly twitchy, and while the game insists that selecting “tactics” using the D-pad on the controller allows me to slow down time to take a more accurate shot, I can’t for the life of me figure out how to do that, and with the fast flow of the game I don’t actually have time to take my finger off the control stick to be making choices on the D-pad anyway. 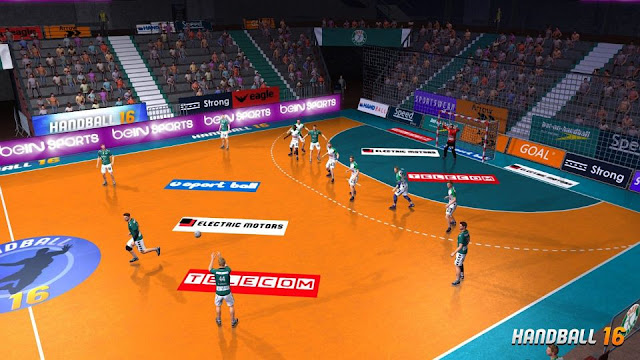 The game is also immensely unhelpful in explaining to you how to actually play it. There’s no tutorial, or even an instruction manual to refer to. The only way to learn Handball 16 is to accept a trial by fire, and loss after loss to 1-star AI teams as you slowly piece things together for yourself. Thankfully the button combinations aren’t too complex and it can be learned without the benefit of a tutorial or training mode, but it is ridiculous to think that with this being the first attempt at bringing the sport to videogames, and taking into consideration that outside of Europe, no one is even going to know how Handball is played, that there wasn’t a more concentrated effort in explaining the sport and how it plays to newcomers.

Related reading: For another example of a niche sport that has struggled to transition into videogames, check out Nick’s review of Rugby 15.

Handball is not the most complex game in the world (being more focused on speed as it is), but it does have its quirks and unique strategies that allow for professionals to outplay amateurs. While the general appearance of the sport is of basketball crossed with a small soccer net, there are rules about players going into goal spaces that create some interesting techniques. For example, the money shot of the sport of Handball is when a player leaps into the goalie ring and unleashes a shot while in the air. As long as he has let go of the ball by the time it lands on the ground, the shot counts. On the defence side, there is a much stronger focus on strategic fouling than in sports such as basketball.

Handball 16’s issues can be overcome by simply playing a lot, and as I mentioned, I’m now winning matches and are comfortably competitive. The problem is that it’s not a game that will convert anyone who isn’t already a fan of the sport, and fans of the sport will really struggle to enjoy a game that ultimately fails to capture so much that is core to the essence of their sport. As I noted at the start; I really want to enjoy Handball 16 and see it become a success, but we’ve seen development teams achieve great things with niche sports and small budgets (Don Bradman Cricket, Rugby League Live), and if there’s a Handball 17 (and I hope there is), there needs to be a lot of work done to improve on this.

Do you know anything about European Handball?