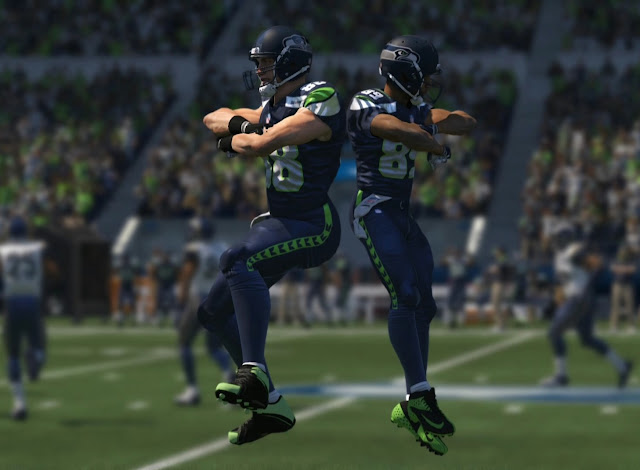 There is a stigma attached to any title that releases on a yearly basis, based on the expectation that the game cuts corners and is essentially the same title as the prior year, just with a new coat of paint. There are times when this does appear more true than others, but in this year’s release, EA Sports has done an excellent job of making Madden NFL 16 feel like proper growth for the series. This is the best release in this series in several years.

I have been playing Madden longer than most people (I first got my hands on the series back during its Sega Genesis years). I have seen the game take spectacular leaps forwards (franchise modes, player development, online play) and suffer through some stumbles as well (the transition to the PlayStation 3/Xbox 360 era, the fight for the fumble mechanic and one year where the audio commentary just seemed broken). The last few years however, have not given us a great deal of change. Certainly the visuals have seen improvement in the transition to the new generation of consoles, but some of the more touted features, like Owner Mode, were actually just reintroducing things we had back on the PlayStation 2.

There are some areas in this year’s release that could still use improvement, right out of the gates. The most significant of which is the commentary team that has grown a bit long in the tooth here. Obviously rerecording dialogue will be an investment in both time and money, but in my very first match I heard a line that has been in the game for about four years now. I think some new commentators with fresh phrases and a more dynamic way of talking about the game should be a serious area of focus next year.

That caveat out of the way, Madden NFL 16 has made some significant strides that expand this season’s and make it a game that is far more than just a ‘roster update’ as some disparagingly say about the series. For me the most notable difference comes in the passing game. Not as much in the actual passing mechanics, which still revolve around what kind of a throw are you making (bullet, touch or lob) and where you place the ball (inside, outside, down towards the feet of or over the top of the intended receiver).

No, this year Madden introduces a mini-game within the bigger game in the battle between receivers and their defenders. Taking control of receivers over the last few years has never really been all that much fun for me. I generally just let my route develop, drop back with my quarterback and let the ball rip while allowing the computer to handle receiving duties. Taking control of the receiver was often a dangerous prospect. You ran the risk of disrupting your route, which could easily lead to an interception. Additionally, there was no real benefit in taking the receiver over, because of the way the defence shadowed the receiving target, generally cutting off the path. There really just was not much to do. Sometimes you could take control of your receiver on lob passes and try to muscle in manually for the catch, but it was a dodgy prospect at best.

Now you can press a button and take control of the receiver, applying one of three actions to him. The first is a possession catch. Generally this improves your odds of making the grab as your receiver pulls the ball into his body, but usually this is done in a way where the player sets his feet and does not have much potential to get up the field. It is a safe, secure catch with a lesser likelihood for a big play. The square button triggers a RAC – or run after the catch – option. This is a less secure type of catch that works best when the receiver is in motion with a defender on his back or hip. The idea is that the receiver makes the catch and turns up the field in an attempt to gain some yards after the catch. True to life, the receiver seems to drop the pass a bit more often here, as though he is turning his head up the field and not focusing on the ball quite as well as the possession catch. 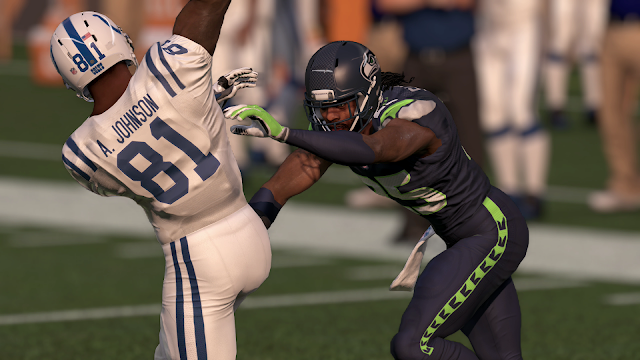 The most exciting of the three new catches is the aggressive one. By pressing the triangle button, your player attempts to play the ball at a high point, trying to out jump the defender (or defenders). This can lead to some absolutely spectacular catches. This is great on a lob pass or something with multiple defenders in the vicinity. While this is the most entertaining of the three catch types, it is also the least realistic as you can pull these off a couple of times or so every game. These are the types of catches that most people not named Calvin Johnson are lucky to pull off once or twice a season – not per game.

These different catch options when leveraged against the defensive options for knocking the ball down or going for their own ballhawking aggressive interception attempts creates a kind of chess match within the passing game that is both easily accessible (due in large part to a lengthy, incredibly detailed training system the game offers) yet entertaining. In some ways, this is representative of Madden NFL 16 on the whole. It is a far more approachable Madden game than in recent years, but there is enough depth to keep veterans entertained as well as you learn different nuances that can make or break you against a skilled opponent.

The running game is incredibly fluid, especially when compared to the last generation of consoles. Here the juking, spinning and trucking all feel more organic and tying combinations of moves together looks and feels better than it did in the past as well. In the past the running backs moved with far too much precising, making them look like they were video game characters that you had too much control over – much like how older hockey games often lacked momentum. These fast, powerful athletes should not be stopping on a dime (unless it is Barry Sanders – letting my Lions Pride show through, I know). The offensive line does a better job opening up holes than last year’s game, but daylight is still a precious commodity in the ground game and the result is more realistic results. Three to four yard runs may not be as exciting as regularly breaking off thirty yarders, but it is far more authentic and it makes those bigger gains more satisfying than they used to be in years past.

This year’s iteration of Madden is certainly a challenging one as well. Back on the last generation of consoles, I spent a lot of time playing titles like Madden NFL 12, and I got entirely too good at it. Running was too easy, passing became too predictable and even on Madden difficult I was winning by a solid forty or so points a game without really breaking a sweat. This year’s game put me through my paces early on, with two of my first three games on the Pro difficulty pushing me into overtime. I love that it is challenging without feeling cheap, and I am currently settled in comfortably on All-Pro difficulty. Madden difficulty will be coming, but I am not quite there yet.

One of the things that helps this year’s release is the quality of the product on the field, but the number of options off of the field continue to grow as well. I still spend the vast majority of my time in franchise mode. The progression systems have a distinctively RPG style to them that makes developing my players and team very rewarding. MUT (Madden Ultimate Team) returns as EA’s form of microtransaction money sink, but you can still have a good deal of fun with the mode without spending a cent on it. This mode is like a mix between fantasy football and sports card collecting. You pick a team and style that suits you and then you open up packs of cards to help flesh out your team. Early on the players you are pulling tend to be of the lower talent variety, with overall scores in the fifties and sixties. As you complete challenges and earn coins in this mode, you can purchase new packs of cards (or spend actual cash to do so as well). These packs of cards will unlock new players at random. As someone who grew up collecting sports cards, I find the collection aspects highly entertaining and the weekly objectives that keep changing promise to keep things fresh going forward.

While the above modes are not new, there is a fresh new option called Draft Champions. In this mode, you are offered a choice between three players at different positions that you need to fill over the span of fifteen rounds. It is like a good fantasy draft – similar to Madden Ultimate team but without the pack cracking aspect. This is a quick and dirty mode that you can then use to take your team against the computer or online to play against other players. As someone who participates in three NFL fantasy drafts every year (my uncles, one for the players on my MUD and my work one), this mode appeals to me on the exact same level. 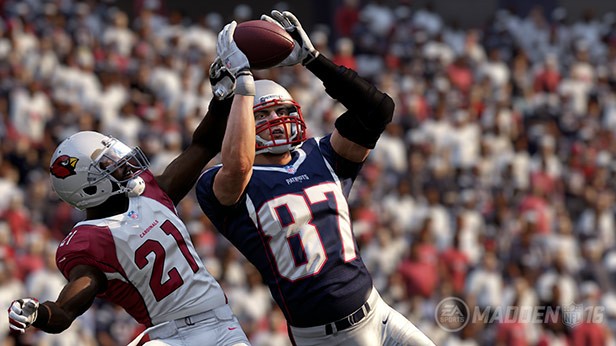 While the visuals have not received a huge uptick from last season and the aforementioned audio commentary could use some freshening up, the actual game presentation continues to push the boundary between playing a video game and watching a match on television. Twice my wife asked me if I was watching a preseason game, only to then realise that I had a controller in my hands. The statistical overlays and graphic cut-ins sure look sharp and help sell the presentation.

Madden NFL 16 has a bad rap for being nothing more than a yearly money grab. I understand why people say this, even though most years I disagree. This year however, I strongly disagree. There are enough changes in a variety of places that make this the best offering the series has had in several years and should satisfy new fans, yearly players and those who fall somewhere in between.

DDNet does Japan! Day #15: Caving and bushwalking in Japan