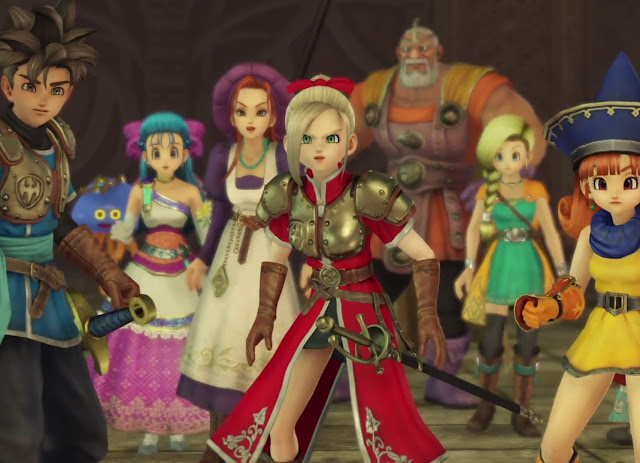 Over and over again the developers behind Dragon Quest Heroes insisted that the game wasn’t a Warriors game. Despite all the screenshots showing a game that looked like it was following the same path that One Piece Warriors and Hyrule Warriors did for their respective franchises, Square Enix was adamant in the lead up to the release of this game that it was not a Warriors game.

Related reading: A short interview with the producer of Dragon Quest Heroes.

After getting some brief hands-on time with it at an expo earlier in the year, I saw something that somewhat supported Square Enix’s assertion that Dragon Quest Heroes is more JRPG than Warriors title, though I still had my reservations. It was only after sitting down with the full game in its proper context that I have come to realise that, yes, Dragon Quest Heroes actually is a proper JRPG, even though it makes use of the base Warriors engine.

There are hordes of enemies to take down in each mission, certainly, and when the screen really fills up with goons Dragon Quest Heroes pushes the PlayStation’s hardware about as far as I’ve seen it pushed to date. There were even moments where, for the briefest of a passing second, I thought the frame rate might start to stutter from simply dealing with too much on screen at once. It doesn’t quite get there, but it’s like watching a tightrope walker without supports – with every hint of a wobble you fear for what might happen if he/ she were to fall off. 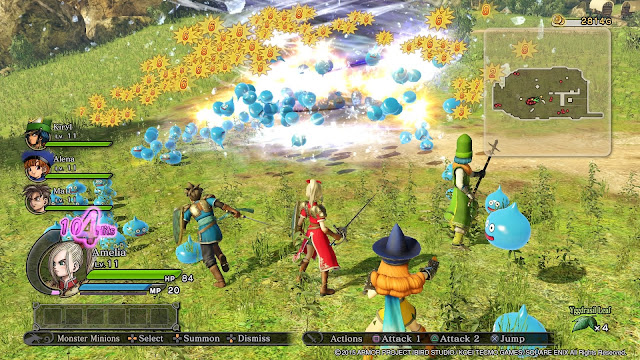 It concerned me that the engine might not have been able to handle the ambition, because Dragon Quest Heroes is, by far, the most attractive game on the PlayStation 4 to date, and it is a genuine relief that technical issues didn’t let it down. The Dragon Quest franchise has always been about bright colours and humour, both of which are present in this game in spades. Most of the characters are pulled from classic Dragon Quest titles, and for long time fans it is a genuine delight to see them rendered is such clean detail on the PlayStation 4’s advanced hardware. Even more importantly, the enemies are a genuinely charming bunch. The classic slime bounces about with all the innocent joy that you’d expect; to the point where I felt absolutely terrible that I was massacring them. It’s rare for a “Warriors” game to imbue personality quirks in the horde enemies, but here there are little touches, such as the skeleton soldiers that will pull off their heads and rattle a bit, that help to make them more than blobs of polygons to slaughter on the way through a level. Boss enemies fill the screen in the most delightful sense, and the hordes that you’ll be facing down are so large, and there is so much going on on screen, that each level is a multifaceted explosion of colour and energy. It is stunning.

In taking down the enemies, Dragon Quest Heroes strikes an odd balance between action and precision that people attuned to the Warriors games might initially find awkward. With this game success is not a matter of hitting buttons rapidly and executing on fighting game-style combos. Instead, in each battle Dragon Quest Heroes has you carefully deciding when to let loose a magic attack (which deplete MP, a limited resource in itself), or when to engage in melee. Ducking and diving through the enemy hordes is also crucial, as a stationary character will be subjected to attacks from all angles; including aerial.

Each of the wide range of characters also handles differently (and you can take four into each battle and swap between them at will), and each has a full, rich skill tree by which additional magic attacks and special abilities can be unlocked as they level up. Further, each boss comes with their own weaknesses that need to be exploited in order to take them down. And, most critically, in each battle it’s possible to earn “monster coins” by defeating enemies. These coins can either summon a monster to your side of the battle, where they’ll stand on the spot where summoned and attack any enemy that comes near, or alternatively some coins offer a powerful 1-hit bonus, such as massive damage to nearby enemies or an instant heal of your characters. These coins are important, because in many (if not most) battles the goal is to defend an important object in the center of the map, and enemies will come to destroy it from multiple angles. Those summoned monsters need to be strategically placed to create a defensive line to hold back one or two swarms of enemies while your team deals with another. 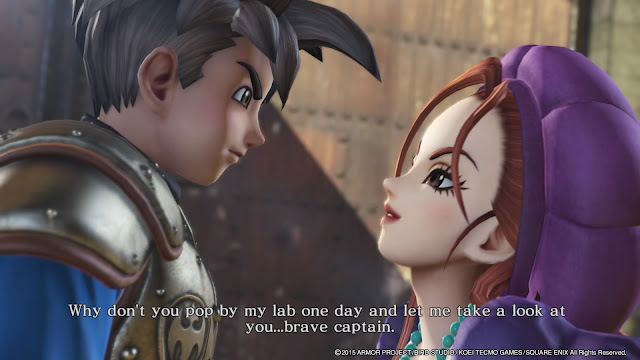 The result of all this is that Dragon Quest Heroes, for all its action, requires some real precision and strategy. Though the difficulty level is generally set low, button mashers will struggle to make progress, and with each boss battle requiring a different approach there’s enough in there to keep even veteran JRPG fans on their toes from start to finish.

What really sets Dragon Quest Heroes apart, however, is its personality. Fans don’t come to the Dragon Quest franchise for epic plots and serious themes, but rather for light hearted humour and amusing, often self-deprecating characters, and that is certainly the case here. New characters regularly unlock through a fairly meaty-length campaign, and each and every time I struggled to work out how to include them in my combat team of four, because I loved them all. Each character doesn’t say a whole lot, and indeed the narrative itself is threadbare, but it’s a masterclass of minimalism that the developers were able to imbue such strong, unique personalities in so few words. This game, in fact, inspired me to go back and bust out my old Dragon Quest IV-VI trilogy on DS and replay them all, simply because it reminded me of how much it reminded me that I enjoy the characters.

The narrative, too, is classic Dragon Quest fare. Humans and monsters lived happily side-by-side, but then something happened and all the monsters starting attacking the humans. Thankfully, the kingdom’s King survived the initial attack, thanks in part to the heroism of two of his guard (who, incidentally, happen to be mysterious “heroes of light”), and they set about righting the wrong, joining up with other heroes from other dimensions that have somehow been pulled into the world, away from their own. 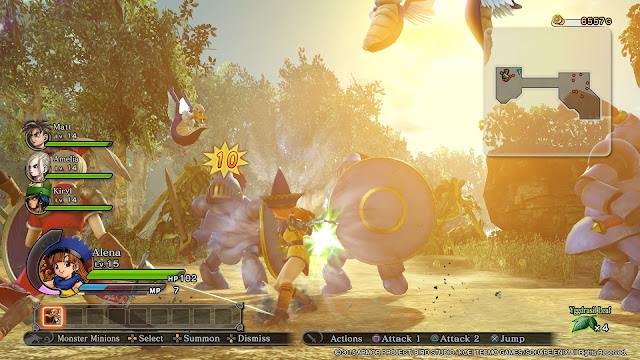 It’s silly, fun stuff, and never passes up an opportunity to poke fun at itself. As I pointed out in my review of Disgaea 5, it’s actually incredibly difficult to maintain humour over such long time periods, but Dragon Quest Heroes does a really admirable job of it. By mixing up the interactions between characters in cut scenes, the game finds plenty of material to bounce around, with the only disappointment being that the male main character becomes intensely irritating early on. He has an obsession with coming up with complex, long-winded strategies to approach each battle with, and is shot down by the rest of his party each and every time, who favour a more direct William Wallace approach. This was funny the first few times, but it’s a joke that is reused far too often, and I began tuning out after a while.

Mind you it was a little ironic, because I named that lead character after myself and I have a tendency to over think things too.

The only other criticism I have of Dragon Quest Heroes is that it has a love affair with the most irritating approach to grinding. Enemies randomly drop materials after being defeated (very randomly), and these materials can be used in an alchemy lab to produce powerful accessories. Because there are so many different material types, however, it takes a lot of work to acquire everything you’ll need for the best items. The game makes it slightly easier on you by telling you which enemies are likely to drop which materials, but all that does in effect is point you to the specific side-missions and dungeons that you’ll get to play over and over again. 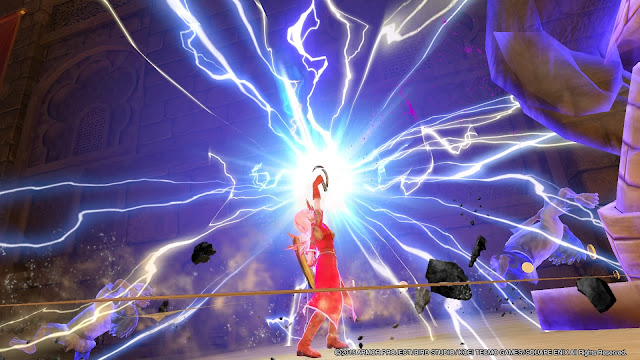 That being said, missions in Dragon Quest Heroes are short. Maps are small and action-packed, and you’ll be able to cruise through a lot of them, even if you’ve only got an hour or so spare. For busy people who might love their JRPGs, but simply don’t have the time to commit to hour-long cut scenes and slow progression, this is the perfect remedy. And in that context the grinding doesn’t matter so much, because at least individual instances of it are over quickly enough.

Wrapped in the warm, happy colours and light soundtrack that it is, Dragon Quest Heroes is a genuine delight of a game. It’s endlessly playable, both in short bursts and longer sessions, has a truly enjoyable cast of characters, and an infectious sense of humour. You might feel bad massacring entire family lines of slimes, but other than that I can’t see anyone finding anything but joy from their time with this one.