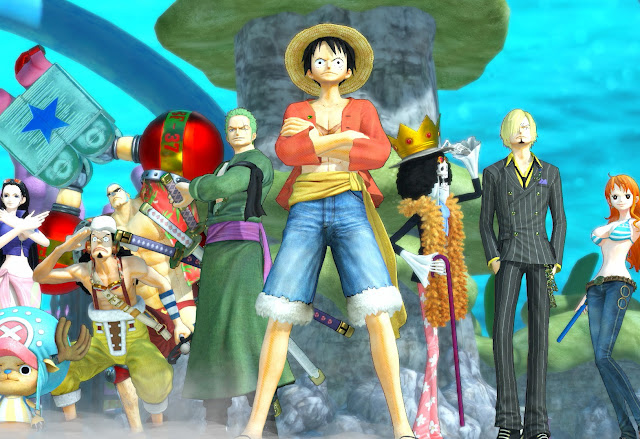 It’s out in just a couple of days, but I was given a good chunk of hands-on time with the latest upcoming Warriors spinoff. Did I enjoy it? What do you think?

Related reading: Matt’s review of One Piece: Pirate Warriors 2 on the PlayStation 3.

Having already played One Piece Warriors games in the past, I had a basic idea of what to expect from this latest collaboration between publisher, Namco Bandai and developer, Koei Tecmo. I was able to play through the entire first mission, which both gave me a sense on where to expect the narrative to go, and what to expect from the gameplay, now that the series is on a new generation of hardware for the first time.

Interestingly, the plot kicks off right at the start of the One Piece story, as wannabe pirate, Luffy, embarks on his first mission, to rescue Zoro and recruit him as the first member of his party. Obviously I have no idea on where the story will go from there, but if it is to follow the part of the anime, I see this as both a blessing and a curse. For newcomers to the One Piece franchise (likely Warriors fans looking for their latest fix), this will be a better deal than some other One Piece games that assume you’ve seen hundreds of episodes of the manga first. This time around you’ll get introduced to the characters at a nice, even pace and from there you’ll be able to start appreciating them in context. 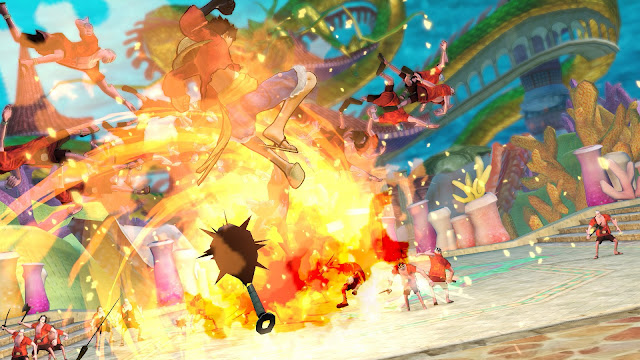 For veterans, however, it might be frustrating retreading so much ground. Or, perhaps, they’ll relish the opportunity to relive classic One Piece moments while whaling away on the attack buttons. Either way, the presentation of the narrative is slick, with comic book panel storytelling merging with fully animated cut scenes. At least, in the mission I played.

It’s noticeable that this is a game on a new generation of hardware, too. Enemy goons fill the screen, and while they often stand around not doing much (as par for Warriors games), they all have a nice level of detail to them. And it is satisfying to see them hurled around the place like the fodder they are. Boss characters are larger and have even more detail. Environments are simple (so they don’t get in the way of the action), but they are bright, colourful, and pleasing to run around.

The core gameplay doesn’t seem like it has changed up too much, but then it didn’t need to. If you’ve played a Warriors game before then you’ll know what to expect, but while there will no doubt be complaints that it’s a “button masher” from some quarters, I found that the boss battles needed some quick thinking and strategising to get through. The level design also seems to be heavily mission-orientated, funneling players through a range of different combat scenarios, while never letting the action cool down. For reference, in this first mission I knocked out something like 2,400 enemies. 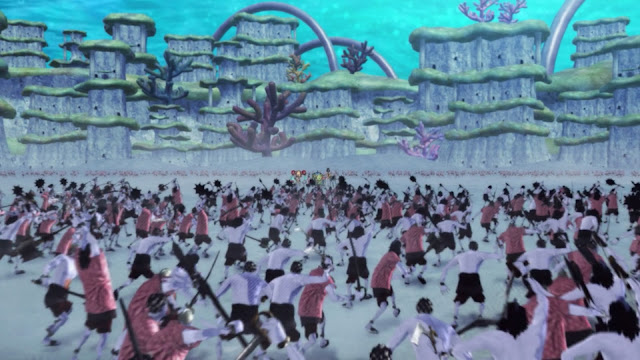 Where I thought things might be slightly intimidating was what happened after the mission was cleared. There I needed to wade through two dozen or so screens as I was rewards with experience, coins, special coins, other loot, gameplay mode unlocks, and other things. There is a real potential for there to be bloat in this game, which I don’t think is to its best interests, but I can’t judge further until I’ve started to see all these reward systems playing out in subsequent missions.

Related reading: For a look at a One Piece game that isn’t a Warriors title, consider Unlimited World Red.

Point is, One Piece: Pirate Warriors 3 is almost certainly not going to the kind of Warriors game that makes you sit back and really wonder at the progress of the franchise. It’s not in the same tier as something like Hyrule Warriors or Samurai Warriors 4, in other words. But it is genuine good fun, and ultimately these anime-themed Warriors spinoffs are there to act as fan service. As far as I can tell One Piece fans will find this to be one of the better examples of their favourite franchise.

Stay tuned for our full review in the very near future.

The cosplay of SMASH! Gallery #1