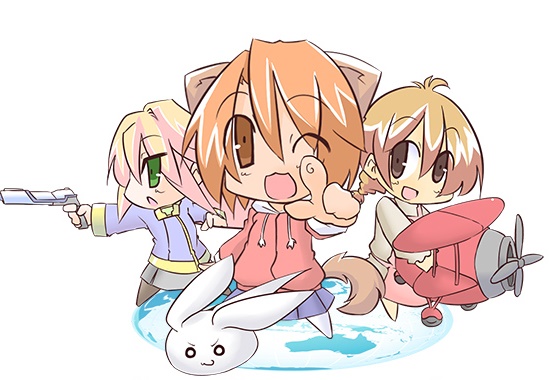 Japanese doujin soft developer, Orange_Juice, is celebrating its 10th anniversary in the business, and what better way to celebrate a milestone in game-development than to develop a game to mark the milestone? Having made the excellent digital board game 100% Orange Juice for the 5th anniversary, their 10th sees the developer aiming bigger and better with an old-school JRPG featuring dozens of characters and a classic mixed-world storyline, and publisher Fruitbat Factory are all the more eager to let the whole world join in on the festivities. Fans of Orange_Juice will recognise all sorts of characters and scenarios from its previous games, and newcomers to doujin soft might just be charmed by how jubilant the final experience winds up being.

The premise is that you, a sleeping princess, have been woken up by Navi, a powerful celestial being who invents worlds when she is bored. You have been granted the power to persuade passers-by to fight for your cause by befriending them and collecting their card. At first things seem normal as you befriend a dog-eared girl named QP (whom you might remember from QP Shooting and 100% Orange Juice) and are tasked with battling your way through a high school’s morning combat class. Soon however, you find yourself trapped in a dimensional rift, whisked away to all sorts of different worlds to meet characters from all of Orange_Juice’s games. It’s a premise similar to other crossover titles such as Project X Zone, Super Robot Wars or Dissidia Final Fantasy – all sorts of worlds and characters are melded together with an overarching plot which merely tries to justify why all these characters are suddenly coexisting.

The gameplay is a standard turn based battle affair, with strong inspiration from Pokemon and other character-collecting JRPGs. Each character you befriend becomes a card which levels up after enough battles, and each card has a unique set of skills they can use in battle. Each character has a type, corresponding to rock, paper or scissors, and attacking with the type they are weak to yields extra damage. At the start of each combat round, a die is rolled for you and your opponent which determines the amount of SP you gain, where more powerful actions tend to use up more SP. There’s a little strategy involved but otherwise it’s a system built upon lots of randomness. Like 100% Orange Juice before it however, the developers have made exploiting randomness a key mechanic and the overall lighthearted tone helps you ignore the fact that much of the combat is luck based. It also helps that the game isn’t grind heavy at all, and while there are a few difficulty spikes, it doesn’t take a long time to muster up an adequate party to keep the plot rolling. 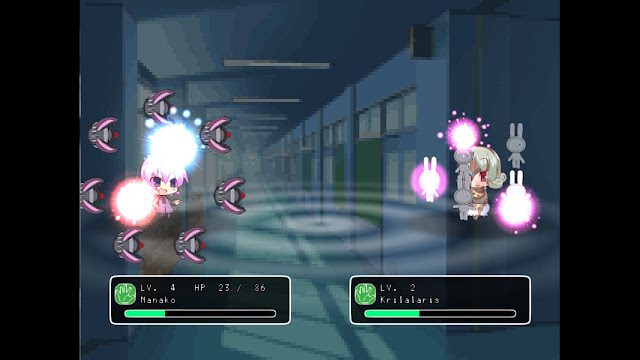 There’s no overworld and travel is instead limited to a series of menus. The battles are all prefaced with some friendly chatter between your party members and your opponents in visual novel format, and the writing is snappy and so very self-aware. References to other Orange_Juice games will likely fly over the heads of anyone who isn’t a fan, but there’s still a reasonable amount of humour for the uninformed player. That being said, you’ll definitely be getting more value out of 200% Mixed Juice if you have played a few other Orange_Juice games before.

The art and music are both quite minimalistic affairs, although both work well enough to compliment the theme of the game. The characters are all handdrawn in a cutesy style, where a keen attention to detail differentiates each character. The game is not afraid to say that many of its characters are rather thin, but it makes up for it with such a wide cast that you’ll be sure to find your favourites. The music ranges from SNES era compositions to flat out chiptune, and works in the context of the game’s tone but isn’t particularly memorable afterwards.

As a milestone celebration, 200% Mixed Juice can often feel like one big in-joke which players will need prior knowledge of the developer’s previous games to properly appreciate. That being said however, there’s a distinct joy in the game’s design and the celebratory nature of the game’s development seeps through its design to bring about a lighthearted and engaging experience. Orange_Juice go on to prove that low budget, a simple story and even simpler combat can still go on to make a decent game, carried by excellent writing and a lot of heart.