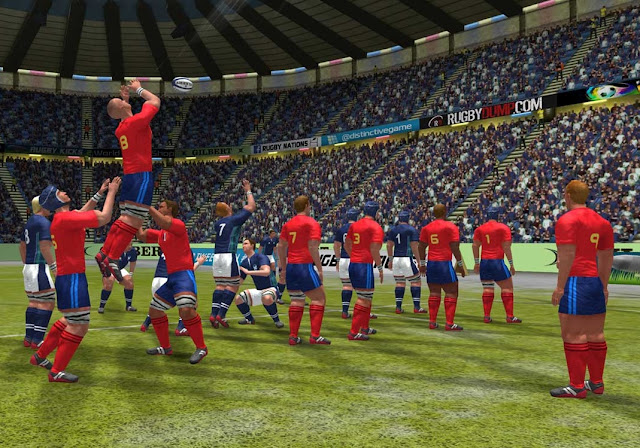 It can be tough to build a sports game on a budget. Complex and unwieldy messes of physics and strategy as they are, building a sports game requires a development team to have an engine that is able to respond realistically to more variables than perhaps any other genre. It needs to offer precision with as many as two dozen different “people” on screen at once. Oh, and thanks to the sheer amount of money that the likes of EA, Sony, and 2K Games throw at their respective sports franchise, players also expect a depth of play modes, official licenses, and good looking visuals.

Related reading: Nick’s review on why you should avoid Rugby 15 on the next gen consoles.

So you could be forgiven in wondering why a small developer would even bother trying to tackle a sports game, when it would inevitably be compared immediately to the work of the likes of EA, and almost certainly found to be lacking as a result.

And yet, for sports that have a more niche following than the sports that are big in America, such as football (soccer), ice hockey, baseball or basketball, these smaller developers are our only hope of being able to play our favourite sports on our TVs. And sometimes they succeed. Big Ant Games, for example, is a small Aussie developer and produced an incredibly competitive sports game in Don Bradman Cricket. 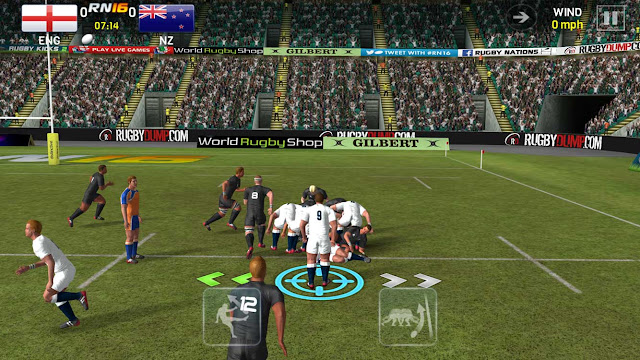 With that for context, I come to Rugby Nations 16. For some weird reason, none of the major publishers have touched rugby for many years now, and this is odd, since rugby isn’t a niche sport at all. After the FIFA World Cup, Olympics and Tour De France, the Rugby World Cup is actually the most watched sporting competition in the world, and the sport is popular in Japan, Russia, the UK and Australia/ New Zealand – all the major markets in the world for games. But it has always been left to the small developers to tackle was is an enormously complex sport even by the standards of sports.

Distinctive Games has slowly been developing its own take in rugby on mobile platforms. Rugby Nations attempts to distil the sport down into something that works with touch-only controls and a streamlined interface that gets you into the action quickly. The latest – Rugby Nations 16 – shows potential, but at the same time it is painfully clear that the sport of rugby need a bigger budget to be truly competitive as a sports game.

In stills, and even in motion, it’s actually quite a good looking game, leveraging the power of the modern iPad to produce something that looks competitive by the standards of mobile or handheld games. Unfortunately, the wheels start to fall off the moment the action begins. There is no fluidity in the way the players move around the pitch, with the transitions between movement animations (for example, when a character goes from running to being tackled) especially jerky. For a sport that features 120+ kg mantanks smashing into one another, rugby is an oddly graceful sport, and the raw speed and flow with which it moves is a sight that any sports fan needs to see live. But Rugby Nations is more like a simulator of a retirement home’s version of a rugby match, which is hardly inspiring stuff to watch.

There’s also very little impact in the tackles. Without getting too scientific, when two 120+ kg mantanks crash into one another there is impact. Rugby is the kind of sport that you watch, knowing that if you were to actually play it, you’d be smashed and ground to dust. I’ll turn to that classic show, Friends, to show what happens when normal people play rugby:


And here’s what really happens in rugby:
But Rugby Nations 16 doesn’t have any sensation of impact. To be fair to Distinctive Games I think EA Sports itself would struggle to develop a physics engine capable of handling how hard these people hit one another in the name of entertainment, but lacking that bone-crushing impact immediately dampens any claim a rugby game has to being an authentic experience.

Related reading: All this being said, there are some good examples of the sport out there. Rugby World Cup 11, four years ago now, was actually quite good.

Engine aside, Distinctive games really did try hard with Rugby Nations 16 to do everything right by the fans of the sport. There are plenty of different cups to play through, as well as a nice career mode. I was disappointed that it was impossible to play full-length matches (I’m one of those suckers that likes the full simulation of my sports games, and that means 40-minute halves), but it’s an understandable concession to the mobile format. The touch controls work about as well as can be expected.

But I would have liked to have seen at least an option to play using normal controls, and bluetooth controller support. Even with the traditional control system, which sticks buttons on the screen for passing, kicking and tackling, it’s necessary to tilt the screen left and right to convince the character to move left or right. In public, twisting and turning the iPad like a madman to try and dodge out of tackles is just embarrassing. 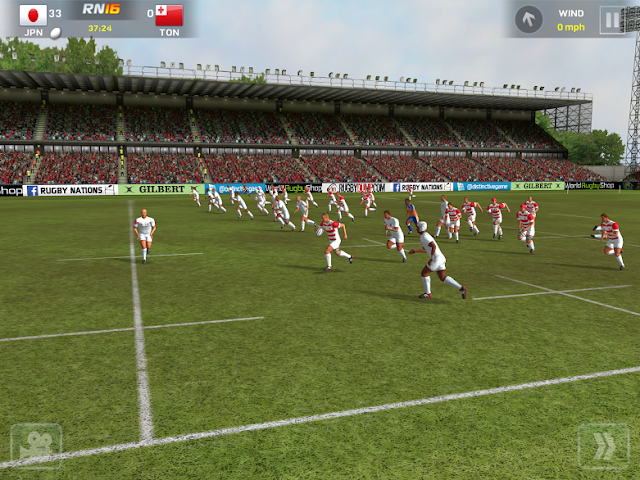 The control system is also too limited. There are no advanced playmaking tactics, and no way to have an individual pull fakes or dummies in order to skip past an opposition tackle. Rugby Nations 16 behaves like a sports game from the PlayStation One/ Nintendo 64 era of gaming, where you’d have a full 3D field to play on, but beyond basic pass commands you weren’t able to do much with it. As a result, much of the game involves simply having your team run forwards as fast as possible, passing the ball back and forth and waiting for them to break through a tackle (or lose the ball and need to start doing the tackling themselves). The AI also varies wildly, from literally standing around and doing nothing on the lower difficulty levels, to enjoying a downright unfair rate of ball handovers on the high difficulty setting, while being able to magically break through tackles that would have worked on the lower challenge setting.

Related reading: The other rugby, rugby league, also has takes on the sport on the iPad. Andrew’s review from one back in 2013.

I can’t fault Distinctive Games’ intention with Rugby Nations 16. It comes across as an earnest and even noble attempt to do the sport justice on mobile platforms. Unfortunately, in the end, it simply serves as a reminder that rugby is perhaps the most major sport not to have a mainstream developer making something of it, and it is perhaps the sport that most needs EA or 2K Games to do it justice.