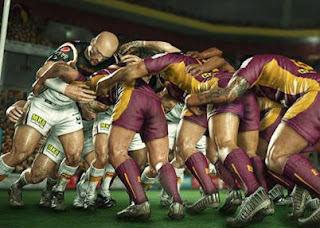 As a sport lover and rugby league tragic, I am so pleased that there is a developer that is interested in making rugby league games. With sports that are purely Australian or – hell, I’ll say it – just not American, there doesn’t seem to be all that much interest in developing games around them. The Playstation 2 saw Rugby League and Rugby League 2, probably the best two rugby league games ever released. Recent consoles have seen the Rugby League Live games that have not reached same heights as the previous ones or anything close to something that will appease league fans. If anything, each new game about Rugby is getting weaker and weaker.

When I first bought a rugby league game, I felt that what the developer needed to do was come up with the core of the game in the first iteration. If they could work out an effective passing, tackling and kicking mechanic, then that would be great. The best game in terms of the basic core of a game was Rugby League 2 on PS2 or, if you want to go way back, ARL 96 on PC. There was strong passing with the right balance of kicking, effective tackling and effective overall gameplay. I’m not entirely sure why these basic mechanics are so hard to get right, but games that nail those mechanics remain few and far between. 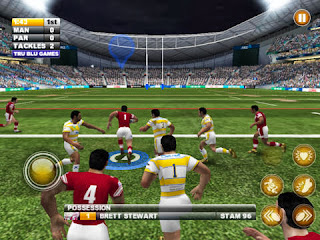 So when Rugby League Live 2: Gold Edition was released on the iPad, some would be mistaken for thinking that it would be more of the same downward trend. What we got instead was a solid starting point for future games on the buttonless gaming device. The passing is much improved, tackling is still rather flimsy but you can hold a team out for a set of six and the running is strong. The kicking is ridiculous and bizarre with all kicks on the one virtual button and in fact the controls are generally clunky, but then again it’s not really a game made for mobile devices. Some things are counterintuitive but overall it’s a solid effort when it comes to Rugby League games.

Having purchased this game on the iTunes store, there was the ability to play it on both iPad and iPhone. I have a full sized iPad and the game was quite difficult to control, especially when it came to running mechanics. It was actually stronger on the smaller screen where the controls were more contained in lower corners of the screen. This isn’t really forgivable given that other games, like FIFA 14, have nailed the controls. Sure it’s not exactly built with the same budgets but it makes Rugby League Live 2 feel like it’s quite a long way behind the sophistication of other franchises. 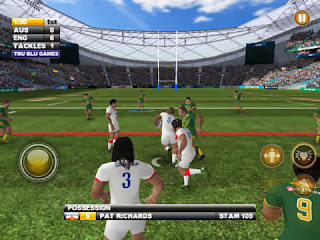 The breadth of the teams on offer are quite good, featuring full lists from NRL, Holden Cup, NSW Cup and Queensland’s Intrust Super Cup in Australia, as well as Super League and the Championships in UK. With the full player lists for each team, this is a nice depth of content compared to what we typically see in non-American sports games. There’s something for everyone in here with the game offering quick games, mini games competitions or a career mode. Having also released Quick Match and Mini Games stand alone games for 99c, you can choose to play just those modes if you prefer, especially with the Gold Edition at a quite hefty $9.49.

Rugby League Live 2 for mobile devices feels like the game that Rugby League Live 2 should have been. It’s a strong starting point but far from a good simulation of the real game. The developers need to go back and reassess what is most important in rugby league and then focus on those for their next edition. As far as I’m concerned a game with strong running, tackling, passing and kicking would make strong game and jumping off point to make a truly great rugby league franchise. Other features can be built in over the engine in future yearly additions, as happens with FIFA and Madded titles. I remember sinking plenty of hours into ARL 96 on the PC. It wasn’t a spectacular or flashy game but it got all the little things right. A bit more development time on play in the games rather than customisation, competitions or anything like that would go a long way to returning to the heights of ARL 96 and Rugby League 2 on the PS2.

Coming up with a rating is difficult for a game like this. I know it’s far from perfect but offers a solid game for league lovers. Usually I’d be recommending that you steer clear of this game and that the developer needs to have a good hard look the game of rugby league and make sure they get all the basics right. The best thing fans can do is buy the game to show that there is interest in having a footy game for on the go play. And who knows, you might just have a bit of fun with this one along the way.