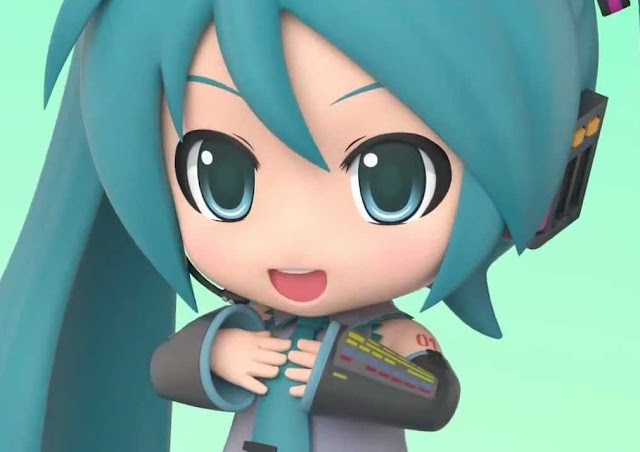 At first, I actually wasn’t 100 per cent certain on Hatsune Miku: Project Mirai DX on the Nintendo 3DS. I kinda assumed that I would enjoy it, given that it’s Miku and all, but I prefer the aesthetics of the more “realistic” Miku. As adorable as the nendoroids that Project Mirai gets its aesthetics from are, I wasn’t sure I would enjoy a game without the realistic Miku in it quite as much.

Related reading: To compare this game to the PlayStation Vita and PlayStation 3 Hatsune Miku games, check out Matt’s review here.

I shouldn’t have worried. Hatsune Miku: Project Mirai DX is, by far, the most adorable game you’ll ever play, and that is almost entirely because of the nendoroid aesthetic. I’m a complete convert to the art style, and that’s probably a bad thing, since it simply means that my addiction to all things Miku just took on yet another layer.

The most obvious difference between this new Miku title and the Project Diva games on the PlayStation 3 and Vita is the aforementioned aesthetics. Where, for the most part, the Project Diva games all feature the Hatsune Miku that is authentic to the original vision of her creator, KEI, Project Mirai turns all the characters into chibi, big headed characters, reminiscent of the popular nendoroid Miku style. The main reason this was done for the 3DS game is due to technical limitations; the 3DS’ screens would have really struggled to do the “real” Miku justice, and for proof of this compare titles like Xenoblade Chronicles or the 3DS version of Conception 2 to something like Bravely Default and Persona Q; the big heads of the latter games are able to exhibit a far wider range of emotions and thus personality, and tend to be the games with the better characterisation on the 3DS as a result. By going with nendoroid Miku, the development team at SEGA neatly sidestep the problem of giving Miku her adorable personality on very low resolution screens, and they do so without compromising the canon of the character, because nendoroid Miku is indeed still a canonical take on the character. The choice of art direction has also affected the music track list. There are something upwards of 45 songs in this one, but because of the bright, cheery nature of the characters, there is less effort put into bringing the slower, softer, and more emotional music tracks from Miku’s vast library into the game, when compared to what we see in the Project Diva games. Instead we have a tracklist that is largely all about the party, with bright, infectious tunes and high energy from start to finish. Even when Miku’s more “serious” friends join in for the occasional track, most notably Kaito, the playlist veers towards the happier, rather than operatic, Kaito.

That’s not to say that this is a problem though, as the standard of the track list is incredibly high, and may well be the best, most rounded track list that we’ve seen in a Miku game to date. And that’s also not to say there are not moments where Project Mirai DX tackles more serious vocaloid music, either. There are two tracks from the excellent Evils Kingdom CD, for example. Evils Kingdom is a narrative CD from a few years back that I still hold as one of the most intelligent and interesting of all vocaloid CDs, as it tells the story of a sinister princess, her protective brother, and the impact that their actions have on all those around them. The overall narrative is something of twisted fairy tale across the entirety of Evils Kingdom, and as one track moves to the next you get a sense of the depth of creativity that vocaloids could be turned to in the right hands. While Project Mirai only includes two tracks from that CD, they’re the most important ones, and add a darkly beautiful change of tone to the overall set list.

Because of the art style, each music track has a newly designed video clip backing it which is to the best of my understanding original to the Mirai release. As with the Project Diva games, each of these videos play on autopilot while you try and tap along with icons that appear over the top of them. The video clips are less visually busy than in the Project Diva games, which makes it easier to focus on the actual game when you’re trying to get a high score, but almost all of the clips are so impossibly cute that you’re going to want to go back and simply watch the videos without the gameplay afterwards. Because the characters are nendoroid shaped, they can’t move about so much, but the facial expressions are so adorable that I kept feeling an overwhelming urge to start yelling “kawaiiiiiii” as I was playing. 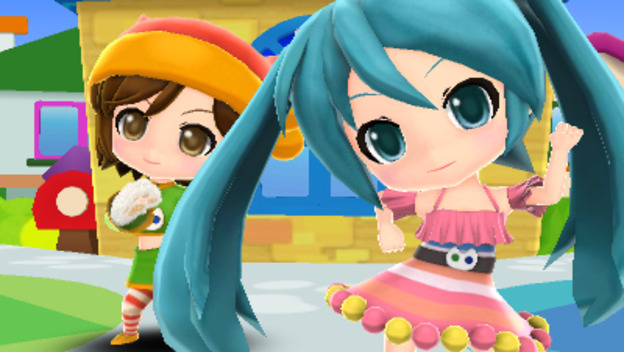 The game itself is fairly standard for both Miku games and rhythm games in general. There’s a cursor that follows a tracking line on the screen, with icons arrayed on that line in time with the beat. The goal is to press the right button at the right time (as the cursor passes over the icon), which will in turn match with a particular beat in the music. The closer you are to being “spot on” the better the score that you’ll receive for that note, with the really good scores requiring you to string together hundreds of these notes at a time. The only real variation on this is the need to occasionally press two buttons at the same time, or press and hold a button for a couple of beats, but that’s enough to really throw your rhythm out on the more difficult tracks.

Miku games have a reputation for being challenging, and in terms of scoring perfect runs, this one is no different. However, it is quite forgiving in the sense that it allows players to make a couple of mistakes along the way so that they will still end up with a good score. In addition to trying to achieve a perfect run (which means that every note is near perfect on beat), there’s the goal of trying to score a S+ rating in terms of points earned. Interestingly there have been times that I’ve actually failed to get a S+ rating despite getting a perfect run, and because of that, the way that the point scoring system is a little too confusing for its own good. With no online leaderboards though, that side of things doesn’t really matter, and I found that gunning for the more difficult perfect runs offered a better sense of personal achievement. Each track has a difficulty rating out, and while difficulty 1 tracks are nice and straightforward, once things push upwards of 5 and above, you’re looking at a stiff challenge to get a good score, let alone a perfect.

Project Mirai DX also allows players to use the touch screen rather than the buttons by tapping the screen in time with the music, and occasionally swiping in a specific direction in time with the music. Generally I found this alternate control system easier, though I was occasionally frustrated when it wouldn’t recognise my swipes and instead registered it as a tap, rewarding me with a miss for the wrong input, and directly ruining my attempt at a perfect run. Those were universally my fault for being too subtle, however, and as I became more experienced at the game I stopped experiencing those “misread” swipes. The game tracks scores for both control systems independently, which effectively doubles the challenge of getting perfects by forcing you to master two different control systems. 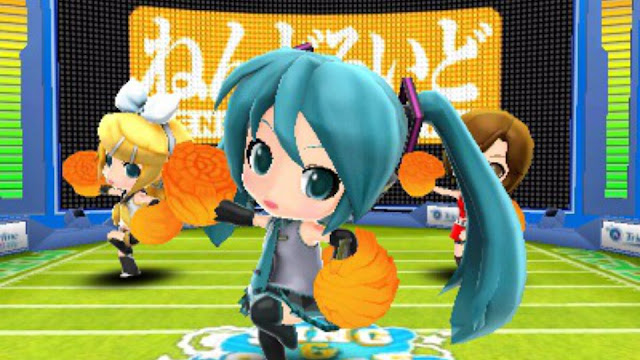 If that sounds like a lot of content, that’s because there is, and there’s quite a lot to do outside of the rhythm game too. You can develop your relationship with each of the characters by buying them presents and playing little games with them (Reversi and Piyo Piyo). You can also decorate their room with states and things you buy from the points you earn from the rhythm game. These features are all pretty frivolous, but when Miku and her vocaloid buddies are this adorable, it’s a welcome frivolity that only helps build out the game’s ridiculously adorable personality further.

And in keeping with the spirit of everything Hatsune Miku represents, in Project Mirai you are able to customise your own dance routines for the virtual divas. This has always been the most appealing thing about vocaloids – that they give control over the creative process to the user. Miku’s music that is in her games is made by fans, and not some composer at a developer. The costumes, likewise. The dance routines? I suspect the default ones in Mirai were made by the development team, but in being able to build your own, SEGA is still giving you the pure Miku experience, and the only disappointment there is that it is incredibly difficult to share what you create afterwards. With the PlayStation 3 Project Diva titles, it is relatively easy to capture footage of your custom routines and stick them on YouTube. With the 3DS game, it will likely be a private performance.

The other disappointment for Project Mirai DX has nothing to do with SEGA. When I’m playing Project Diva on my PlayStation Vita, I love sticking a bluetooth speaker on and really rocking out over that speaker’s superior sound quality. But the 3DS doesn’t have bluetooth built in, so the best I can do is a good pair of headphones. Which you’ll want to really enjoy what this game is offering. Luckily I have a good pair of headphones, but it’s not my ideal way to play a rhythm game. 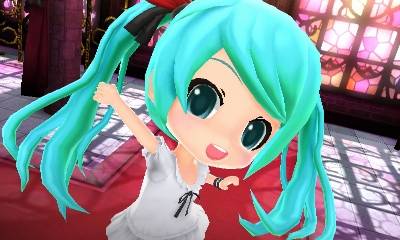 In Project Mirai DX, SEGA has not put a single foot wrong in bringing the addictive action of Hatsune Miku rhythm games to a platform that shouldn’t be capable doing the character – or franchise – justice. By opting to give the characters big heads and nendoroid figures, SEGA made something truly adorable, and in the west, where the PlayStation Vita isn’t so popular, I can see this game creating a new legion of fans for Hatsune Miku out of those players that skipped over the Diva games.

Related reading: To read about another vocaloid series that isn’t Miku, check out Matt’s review of IA/VT Colorful.

And as far as I’m concerned anything that introduces more people to Hatsune Miku deserves all the success of the world. Cute, charming, happy to a fault and challenging, Hatsune Miku: Project Mirai DX is everything that you want to see in a great rhythm game.

DDNet does Japan! Day #12: Loot from Japan the second!