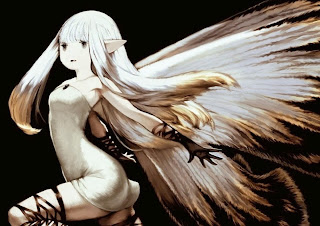 A developer/ publisher with the history that Square Enix has needs to be careful when its goal is to pull on the nostalgia strings. It’s a fine idea in principle to give your longest fans something that reminds them why they loved your games in the first place while introducing a new legion of fans to truly classic gameplay, but push things too far and the game becomes a series of in-jokes and fan service which does nothing for anyone but the most crotchety of old-school fans.

Bravely Default is Square Enix’s finest game in years. It’s undeniably nostalgic, but not so overt about it to feel antiquated. It offers impeccable production values, a wonderfully charming quest, and some genuine innovations in the combat system that I hope becomes a standard in the future. In fact, as brave (hah! pun!) as this call is to make, I’m going to make it: Bravely Default is the finest game on the 3DS. And no, I haven’t forgotten that Fire Emblem: Awakening exists. 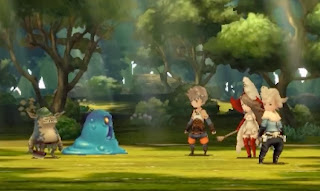 The first hour of the game presented me with every trope that I could possibly expect from a classically-themed Final Fantasy game (which Bravely Default’s subtitle: Flying Fairy, clearly alludes to). There are crystals, a potential apocalypse, heroes joined together by chance, and a job system complete with everything from Freelancer to White Mage, Monk, and Dancer.

In fact, there’s even a bridge to the north of the town that the adventure begins in that is at first destroyed. Long time Final Fantasy fans will of course recognise that as the precise manner in which the first Final Fantasy began, and it serves much the same purpose here; until they cross that bridge players are in a relatively safe zone and being eased into the game. After the bridge the gloves come off and Bravely Default seeks to test your capacity for both skill and strategy. The only way to play this game is on the hardest difficulty setting because there’s a purity of vision when bosses aren’t easily exploited and are ready to pounce on strategic mistakes harshly.

For example; one of the early bosses is a black mage, and one of the treasures in the lead-up to that boss is a “mage masher”; a dagger capable of silencing enemies with a successful hit. In theory that weapon should make a boss encounter with a mage a cakewalk, since a silenced foe is incapable of casting magic spells and mages generally have weak physical attacks, and the fact that the players are given it as a treasure is a sure-fire sign that we’re meant to use it on him, right? 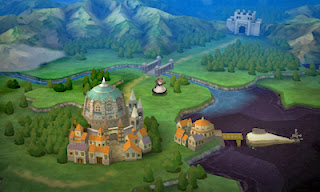 I went into that battle full of confidence. Bravely Default has a gameplay system where it’s possible to sacrifice a few turns (or, essentially, go into “negative turns”) in order to enact an all-out attack on an enemy; hopefully taking him/ her down before they can attack back. So, filled with confidence, I did go all-out in an attempt to overwhelm the boss, relying on the equipped mage masher to silence any counter attacks if the first assault wasn’t enough to completely deplete the boss’ health. But the mage masher didn’t work, the boss wasn’t silenced, and then I got to sit there and watch as three rounds of fire spells decimated my party before any of them were able to act again. Game over.

That the game was so willing to challenge me by deliberately defying my expectations struck me as brave indeed when modern game design wisdom seems to suggest that accessibility is key and there’s a risk you’ll put someone off your game if there are any genuine surprises within it. I found the experience anything but frustrating, however. In fact, I was immediately inspired to try the battle again. Without spending any time grinding up experience, I reloaded the game and went back into that boss battle with a more prudent and long-term strategy. The mage masher still failed to silence the enemy once, but I was able to win the battle. That’s the brilliance of Bravely Default; it’s not a game that relies on experience grinding, nor is it too easy. It’s a game that demands players experiment and find the right combination of skills and abilities to tackle a given situation. 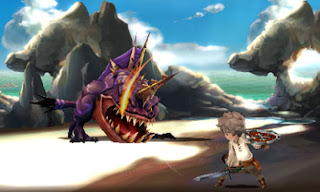 The combat system, as I briefly described above, gives the game a strategic edge that we’ve rarely seen in a JRPG before. For a start; this might be the first time in a JRPG where I’ve used the defence command in a meaningful manner. In Bravely Default, the defence command “builds up” additional attacks in the form of points (BPs), which can then be spent for the aforementioned overwhelming attack round without sacrificing turns. So for instance if I was to spend three turns building up BPs by blocking, on the fourth turn I’d be able to execute my maximum number of attacks and then still act in the next turn. With each of the four hero characters able to behave in this manner I soon found myself creating nuanced and multi-turn strategies to take down enemies that often have a lot of HP and some nasty tricks of their own up their sleeve. Like a good game of chess I was thinking five or six moves down the track, and that very, very rarely happens in a JRPG.

Because battles tend to be long, it’s a good thing that dungeons tend to be to the point. There’s some hidden loot around most of them, but none of the environments are allowed to drag on in length. Similarly, towns and villages are kept mostly functional, with just one or two NPCs to chat to in most of them to build up something of a setting. The rest of the downtime in these locations is spent shopping, or occasionally wandering over to an important NPC marked on the map for a specific quest. In lesser hands this would have made the entire world feel empty, but Bravely Default’s truly spectacular art style, which resembles nothing if not the hand-drawn work of a master painter, creates a compelling setting all by itself. 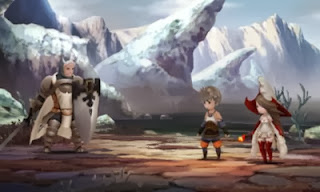 As a retro-themed JRPG the characterisation of Bravely Default is limited. You’re not going to get Shakespearean themes artfully woven within a complex and nuanced narrative here, and what little characterisation there is is let down by some odd casting decisions that just don’t suit the characters. One of the women is voiced by the same actor that voices Blazblue’s Rachel Alucard, and all I could think each time the Bravely Default character spoke was of the gothic lolita with a weird sentient umbrella. It didn’t work. Another was the guy that voiced the book from Nier. I get that there’s only so many voice actors out there, but I felt that picking such distinctive voice actors for roles that are entirely different from what the actor is memorable for was a mistake and it did make it hard for me to connect with the narrative or characters.

I did, however, love playing around with the job system because each character has a different costume for each job. Some of these costumes are truly inspired designs, and the final make up of my party was determined as much by which character looked best in their respective costumes. It’s another testament to the sheer balance of the combat system that, regardless of the choices I made (short of doing something crazy like making all four heroes physically weak, healing-magic focused white mages), the party was still competitive.

I truly love Bravely Default. I could talk about how awkward the implementation of social features are (build up a village by engaging in a Farmville-style click-and-wait-to-finish casual game), and how the presence of microtransactions doesn’t gel well with the game’s earnest attempt to tap into the nostalgia for a time where microtransactions didn’t exist, but those features are easily ignored. Kicking back and enjoying Bravely Default for the quest itself is the way to play this game. And not a moment in the experience is anything short of sheer joy to behold.