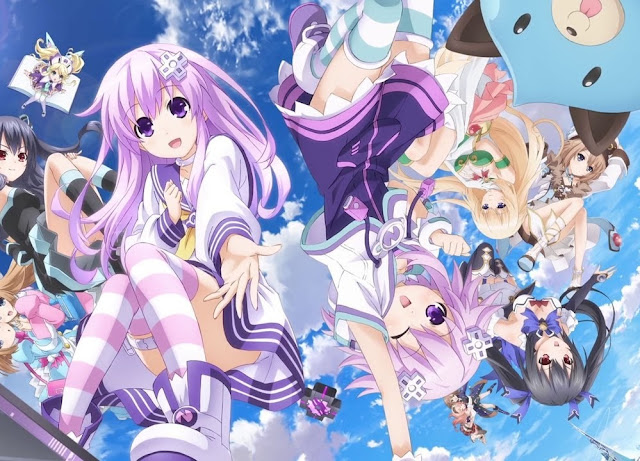 The Hyperdimension Neptunia anime is the perfect example of how an anime can enhance and expand on a popular video game without being a complete slave to it. Given that I am such a fan of the Hyperdimension franchise I was always going to enjoy this anime, but I didn’t quite expect to enjoy it as much as I have.

As much as I love Hyperdimension games, they are budget productions. By which I mean that instead of glorious HD cut scenes and the like, the narrative is presented through static images of each of the characters popping up on screen and lots and lots of text blocks on the bottom. The only animation we ever really see is the in-game animation, with the 3D characters showing all the kinds of compromises to Tsunako’s glorious character art work that you might expect in taking highly detailed characters and sticking them into a game engine. It all works, but it’s an approach to narrative that’s limited by budget necessity.

But for an anime we’re looking at what is essentially full, animated cut scenes of the situations that we only really read through in the game. And rather than watching relatively simple 3D character models running around, for the anime we get to see Tsunako’s vision directly come to life. And so, while the anime only losely follows the narrative from the games (and therefore we get a whole lot of scenes and moments that aren’t present in the games at all), there is enough taken from the game that you could almost suggest that this is like reading Lord of the Rings and then watching the films; you might not agree with every creative deviation Peter Jackson took, but boy is it nice getting a different look at your favourite characters and scenes. 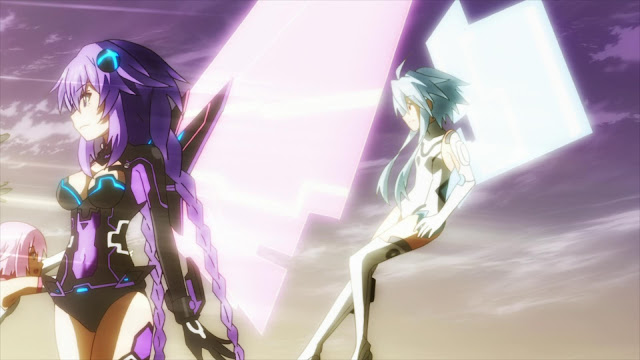 Because the characters are now fully animated at all times, you’ll also get a better sense of character from them. While the anime is squarely pitched at existing fans of Hyperdimension Neptunia and assumes that you’ve played the games before sitting down to watch this (for this reason I don’t recommend you watch this first if you’re new to the series), I do think that anyone can enjoy this bunch for their latent insanity. From the airheaded Neptune (who is turned right up to 11 when she’s able to move around like a clumsy fool while also delivering her delightfully offbeat commentary) to the more stoic Blanc and the deliciously tsundere Noire, each of the characters has a more firm personality now that there’s a bit more physicality built into what they do.

It also wouldn’t be a Hyperdimension game without copious levels of silly, humerous fan service. It’s a gorgeous production with some lovely, detailed character designs and as we’ve seen in previous anime that use her work, Tsunako’s extremely otaku character designs really suit the anime platform. Though there’s no actual nudity, Hyperdimension Neptunia: The Animation does come close enough, with plenty of bared legs and the occasional compromising position thrown in for good measure. And while there isn’t any actual nudity or sex within the animation, but it certainly pushed boundaries that people will find uncomfortable.

For example, CFW Trick is back, and when you actually see what he gets up to with Blanc’s little sisters, Ram & Rom, rather than just listen to him talk about it, it will creep out just about anyone (as it is meant to). Because the narrative is so condensed into so few episodes (in one season the anime runs through what would be enough content for three games, easily), Hyperdimension Neptunia: The Animation doesn’t have the time to linger on the interactions between characters the way the RPGs can and do, but the added physicality of the action achieves much the same impact on the audience while chewing up less of their time. 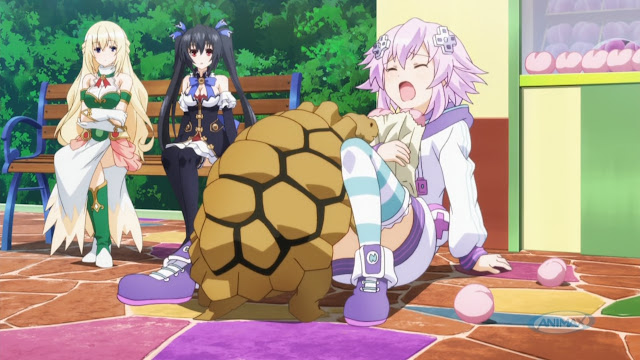 Related reading: For people who want to try a more action-based Hyperdimension Neptunia game, Action Unleashed is a good place to look.

For some reason I can’t completely comprehend though, the anime version of Hyperdimension Neptunia tries to inject some more serious emotions into the narrative from time to time, and, frankly, this doesn’t work so well. The Hyperdimension Neptunia games managed to make a number of genuine, serious, and valuable commentaries through their running time. It was a far more masterful example of the impact that satire can have on raising commentary as social criticism than most people give it credit for. Sitting underneath the broader parody on how silly the “console wars” can be from time to time, Hyperdimension Neptunia was enormously effective in poking fun at the otaku subculture, game design, gender roles in games and so on. It didn’t need the melodrama to do so, and the animation doesn’t either.

Still, those moments don’t compromise the quality of the overall anime. Hyperdimension Neptunia: The Animation is a genuine, bona fide success in showing how a game should be adapted into an anime. It might not have the depth or intensity of something like the Persona 4 anime, but for fans of the game franchise it’s every bit as essential.