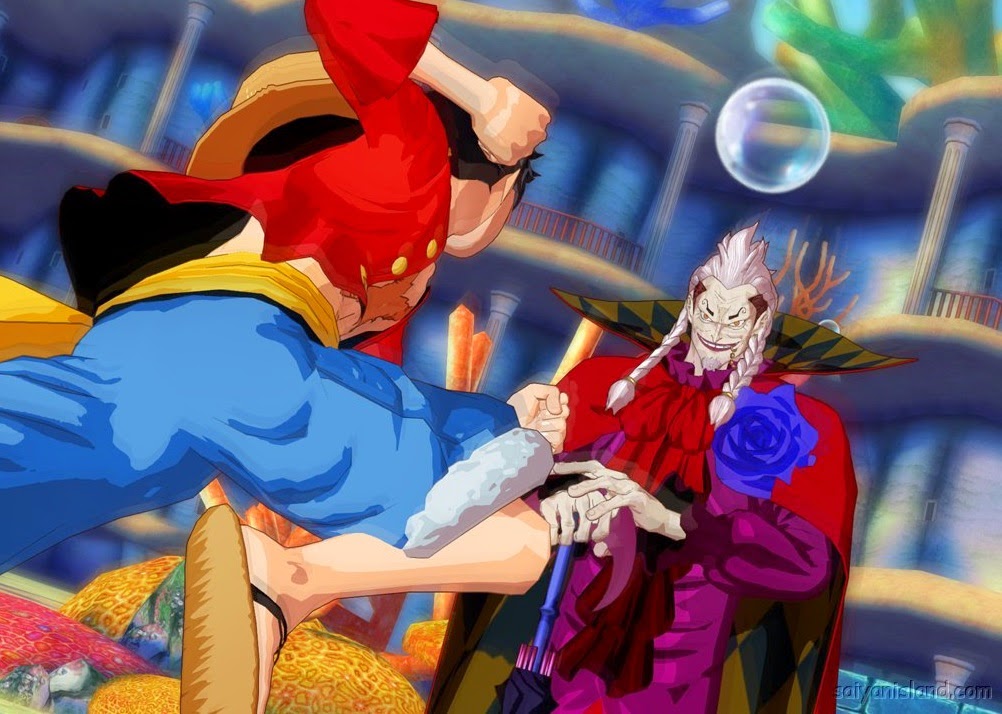 One Piece deserves better than the games it typically gets. There’s been a few that have been quite a lot of fun (such as the Warriors games), but for the most part One Piece’s games have been little better than generic license tie-in, despite being one of the most popular anime franchises ever created.

Unlimited World Red doesn’t do much wrong, in fairness to it. The game sits somewhere between being a Monster Hunter clone and being an action RPG. The Monster Hunter side comes through in the boss battles, which are extended affairs where players need to learn enemy attack patterns, and then exploit them towards victory. The fact that these enemies have clear health bars and follow predictable attack patterns makes them far easier to take down than the Monster Hunter critters, but the DNA is there, and it makes the boss battles the highlight of the experience.

The Monster Hunter DNA also means that players need to collect a whole load of junk while out on quests in order to upgrade equipment and add additional facilities to the town that forms the hub between missions. Some of these items, such as bugs and fish, are obtained by simple rhythm minigames. These aren’t great, it must be said, and they happen often enough to break with the flow of the main game. Other items are obtained from either downed enemies or are found lying around, and tracking down the rarer items will have the perfectionists hooked and provide them with enough incentive to revisit existing levels many times over. The rest of the game is an action RPG structure that feels like padding between boss battles. Players will need to follow (generally) linear paths, and knock down small groups of enemies on the way. Characters can alternate between light and strong attacks, and have a couple of special power attacks to use in a pinch. Players will select from a couple of different One Piece characters, and will be accompanied by two other characters that will be controlled by AI. It’s possible to swap between these characters at will, but the AI is competent enough and there’s not much reason the make strategic use of the character swap feature for the most time. Simply picking your favourite character and focusing on that one works just as well.

It’s not the most well known game, but Unlimited World Red’s action RPG sections work a little like what we saw in Trinity: Souls of Zill O’ll. Just like in that game, it plays tightly enough, but over the longer term this system starts to lose some steam. It’s too easy to degenerate into button mashing nonsense, and while Unlimited World Red is never the most difficult game, when there is a difficulty spike, it becomes too frustrating to be much fun. There’s also far too much repetition in the enemy types to sustain the game for as long as it wants you to be playing in. 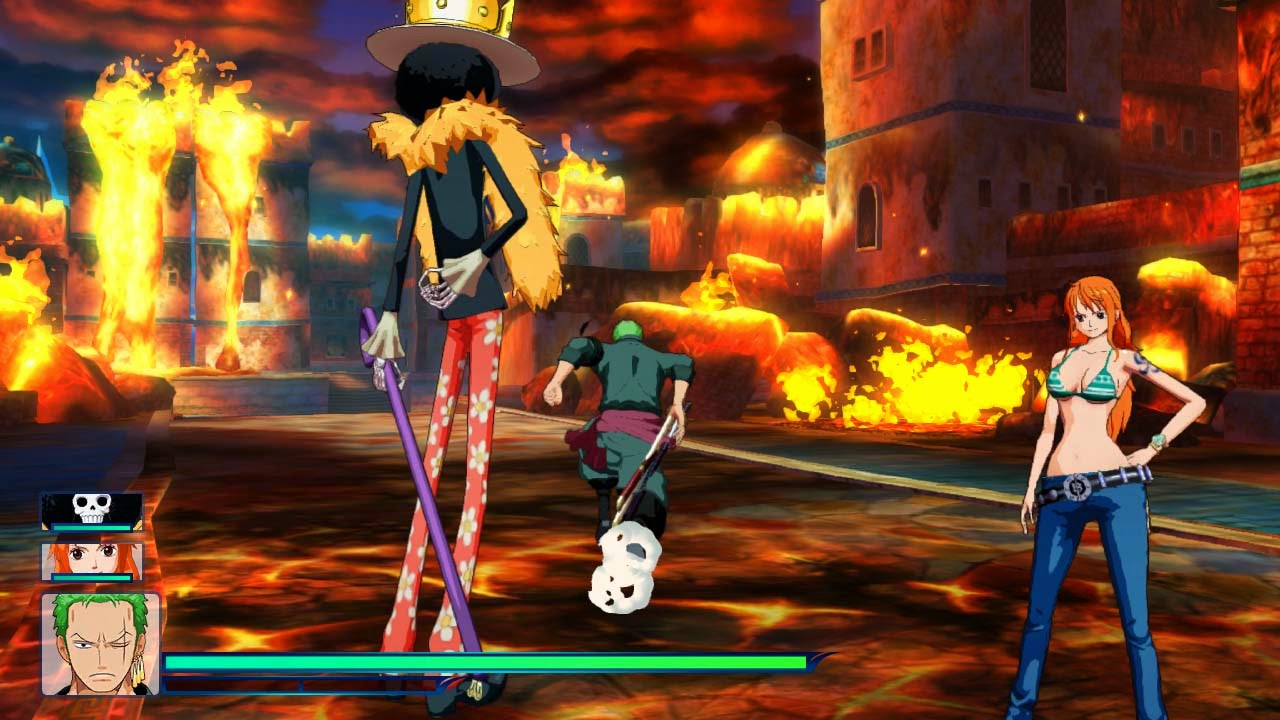 Outside of battle there is a hub town to run around, and there are some side quests and distractions to be had here and there. At first there’s only a tavern to access, which doesn’t serve much purpose other than to save the game, but soon enough there will be enough resources in the town to start building shops and the like.

This town is pleasant enough, but it, like the snippets of story that the game throws in through cut scenes, doesn’t so nearly enough for any but the most committed One Piece fan. There is loads of assumed knowledge going into the game, and while it’s a reasonable enough assumption for the game developers to make that a One Piece fan is probably going to be the only person who would want to buy a One Piece game, there’s a very simple wisdom in storytelling; don’t assume that the audience knows anything. 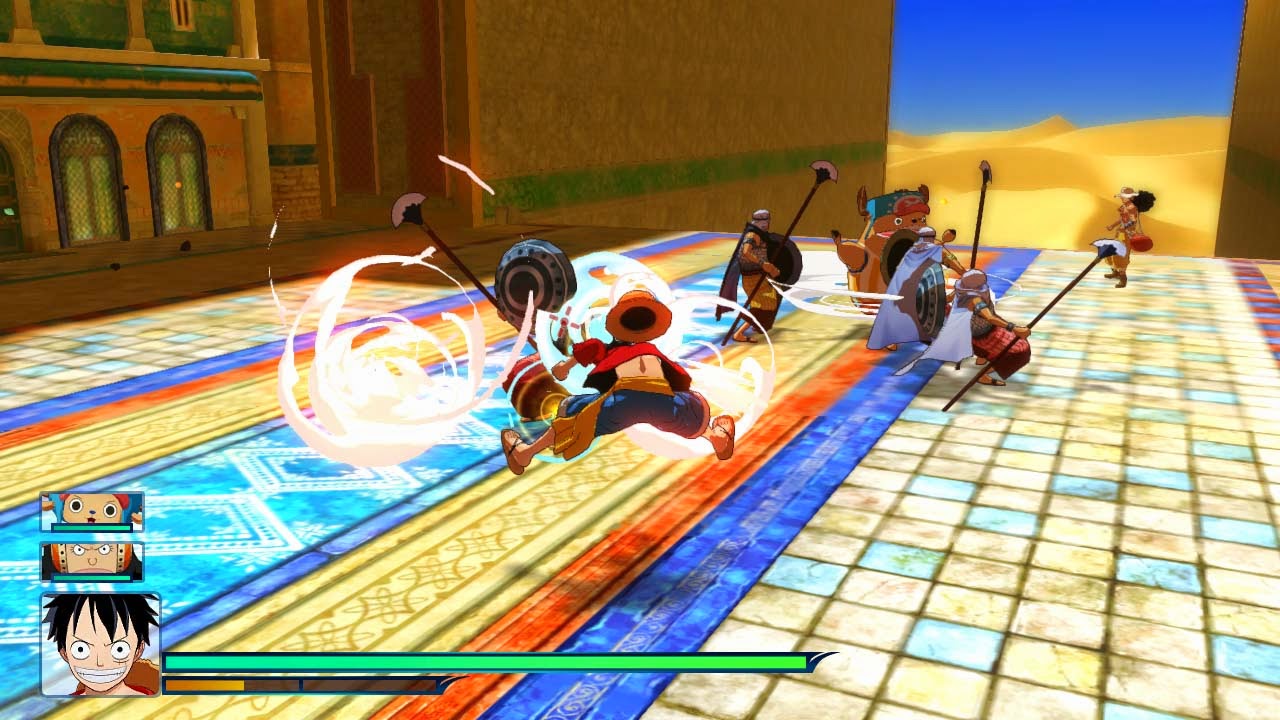 I’m a casual fan of One Piece, and while I came to the series late, I’ve done my best to catch up on what is an obscene amount of manga and anime. But I know the basics, and even then Unlimited World Red doesn’t always make complete sense to me. I suspect that almost anyone will be able to follow the top-level story, but in terms of actually enjoying the characters and plot, that’s something I suspect is locked away for anyone but the most dedicated fans.

The game is visually vibrant. Environments are basic and enemy designs are simple, but the bright colours is far more pleasing than the ugly brown messes that makes up most mid-tier “realistic” games that inundate the industry. The One Piece characters themselves are, of course, crazy personalities, and even though they’re not carrying the most well-written piece of literature, they’re entertaining whether they’re in a game, manga or anime.

It’s hard not to have fun with Unlimited World Red, but this is a franchise that has more potential than that. If the hallmark of a good licensed game is a game that anyone can enjoy, whether new to the franchise or not, then this One Piece game fails the test. As a game purely for the fans, though, I suspect this will be an enjoyable but faintly disappointing title, as they go back to waiting for a truly killer One Piece game.