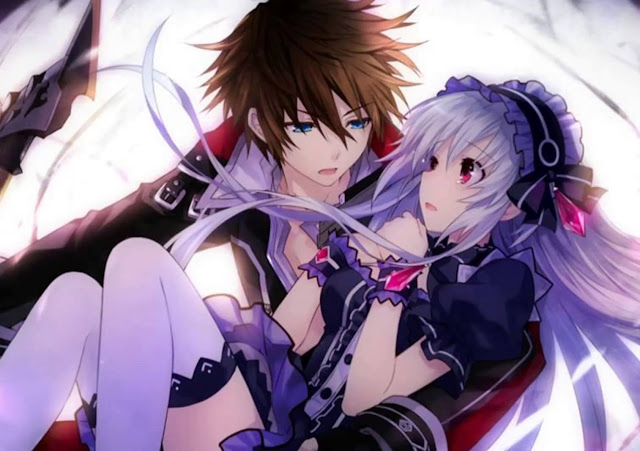 For those familiar with the Hyperdimension Neptunia JRPG series, Fairy Fencer F should feel both immediately familiar yet fresh enough to stand on its own merits. The visuals and gameplay certainly have Compile Hearts’ fingerprints all over it, but the more serious storyline and memorable characters give this original property some fresh legs.

Related reading: You can check out Matt’s review of the PlayStation 3 original here.

Fairy Fencer F actually gets off to a rather fun start by introducing us to Fang, arguably the laziest JRPG protagonist ever. In terms of appearances, he has the youthful, spiky-haired thing going on, and before long he is surrounded by an interesting cast of characters that of course includes plenty of lovely young women. However, Fang makes an entirely different impression right out of the gates.

Unlike so many idealistic young men in the JRPG genre, training hard and dreaming of days when their names can be etched into the stone of history for their historic deeds, Fang is… well, mostly wondering where his next meal will come from. Nope, he is not one of those hungry, feel sorry for the down-on-their-luck street urchin rogue types that you see populating games either. He is a physically fit young man who simply likes to eat and would like to do as little as possible in order to procure that next meal. Basically, he is a lazy bum. 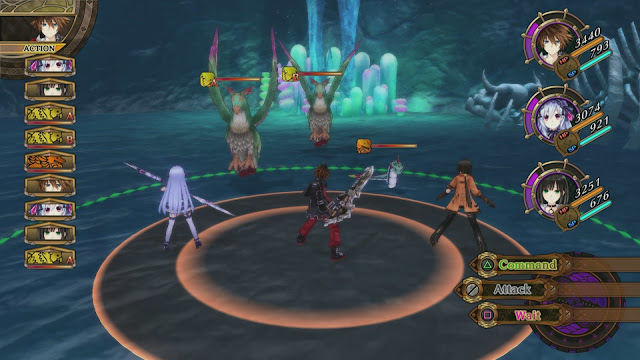 The familiar theme that does occur, is that Fang actually possesses great untapped potential. He of course does not go out of his way to unearth it – he more or less just accidentally stumbles onto it in Arthurian fashion when he pulls a powerful sword free of a stone that no one else was able to accomplish. This sets him on a path with a fairy named Eryn who accompanies our loafing hero (there’s two words you don’t see side-by-side very often) on an adventure that spans an expanding narrative about higher powers of good and evil.

While the story itself is nothing earth shatteringly new or original, the characters are interesting enough to make up the difference. They have distinctive personalities and appearances and Fang’s unique introduction sets the stage for what is often very entertaining banter between members of the party and characters encountered along the way.

Outside of the narrative, the combat system will immediately seem familiar to fans of the Hyperdimension series. You have turn-based combat that takes place on a small field of battle that you’re free to roam about, and use skills that have different areas of attack and range. There is a ‘Tension’ mechanic that works akin to an overdrive, where as the character takes damage, they deal more damage – and if they reach a certain threshold, that character can Fairize and basically become a brutally effective super-powered hero. These super powered forms remind of the special forms from Hyperdimension as well, giving your character enhanced stats and extra powerful attacks. 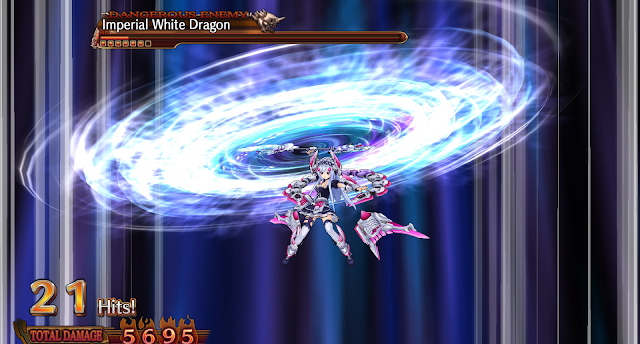 There are other systems built in to help keep players busy as well. The crafting system is all well and good, but it was slightly undercooked in my opinion. I like crafting in most role-playing games, and there are plentiful materials available for numerous different recipes. However, I never really felt the need to leverage this system. It made my characters better, but Fairy Fencer F is not a terribly difficult game – nor the longest effort either, as it can be completed in under twenty hours fairly easily.

That being said, if you enjoy crafting, doing so will extend your game time. Meanwhile, the world-shaping mechanic fared much better in my opinion. You stab Furies (swords you find along the way) into the world map, creating effects in the nearby dungeons that can be both good or bad. You might get extra experience for your efforts, or the monsters might become more powerful. I do wish the mechanic had a bit more depth behind it, but it was a fun way of providing me a means of impacting on the world and keeping the experience varied. Which is important, because there is quite a lot of backtracking. I am perfectly fine with some JRPGs and their love of combat grind, but it starts to give the impression of padding when almost every dungeon has to be explored two or even three times, instead of having more new areas to explore.

Visually speaking, Fairy Fencer F relies on the same bright, colourful fantasy visuals that Compile Heart is so well-known for. The soundtrack is often catchy and compliments the graphics of the dungeons while Fang is exploring. And while I am talking about things you will see in the game, there is still the usual fan service to be had here. Screenshots featuring the girls in compromising positions with minimal amounts of clothing are not uncommon, though I would say that this is less frequent than in some other similar JRPGs (especially from Compile Heart) that I have played in the past. 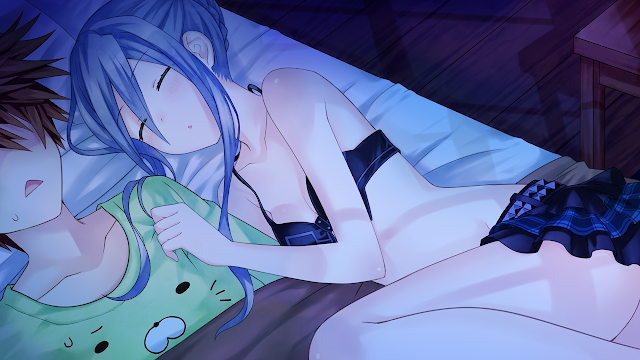 Fairy Fencer F probably will not gain the same kind of following that the more satirical Hyperdimension games have garnered over the years, but it is by all rights a solid effort that manages to surprise in pleasant ways while still providing some familiar mechanics that make the title approachable. The story itself did not do much to burn itself into my memory, but the characters are well written and elevate the overall material with their interactions. JRPG fans who missed this title when it released on PlayStation 3 should absolutely give this PC version a try.

Hands on with One Piece: Pirate Warriors 3 (Sony PlayStation 4)