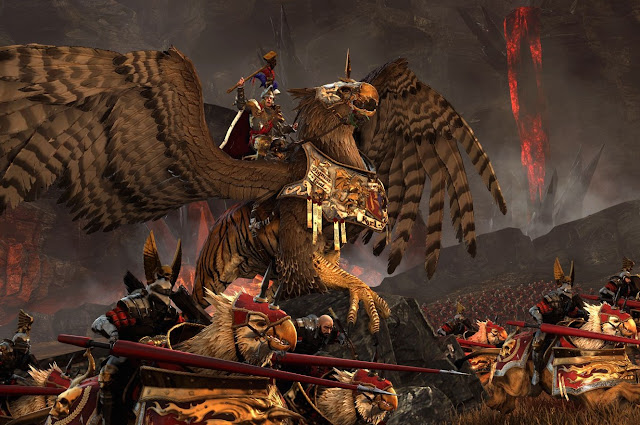 As promised last week, The Creative Assembly (TCA) and SEGA has unveiled the first in-engine trailer for the upcoming Total War: Warhammer. And it’s epic. Lord of the Rings-style epic.

The trailer features a battle between Empire and the Orcs, and does the right thing in showing off many of the different units that will be available to players on both sides. For the human empire there are the primitive tanks and cannons that Warhammer fans will instantly recognise, as well as a flying griffin knight and cavalry units. Meanwhile the orcs have access to lumbering giants and vicious flying monstrosities.

The whole trailer has an eye to production values that would make Peter Jackson squeal in delight. In fact, perhaps that’s the point. Perhaps SEGA and TCA are also using this trailer as a pitch to Warner Bros. to have permission to develop a Total War: The Lord of the Rings next. How grand will that be?

Anyway, Total War: Warhammer really does look like the first video game in a very long time to do the Warhammer Fantasy Battles game justice. It’s still a while away from release yet, but in the meantime, why not grab yourself a cheap copy of Warhammer: Shadow of the Horned Rat from GOG and imagine what that would look like with modern production values. Because that is what TCA look to have on their hands here.

Hands on with Beyond Eyes (and four other Team17 games)