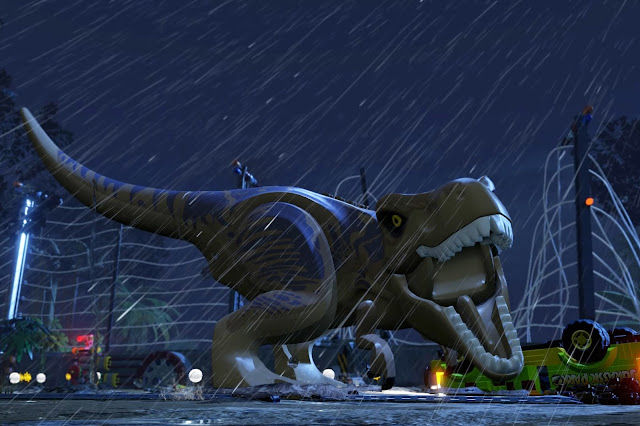 There are two types of LEGO games out there. There are the brilliantly written original LEGO stories, with much care taken to both accurately reflect the franchise and maintain a great sense of humour that all can enjoy, all while being of high production values and bug free (Marvel Super Heroes and LEGO City Undercover spring to mind). And then there are the movie-based LEGO games, released at the same time as a movie counterpart, where the writing is confined to what the movie delivered and they are often infested with more bugs than a two-dollar steakhouse in a bad neighbourhood.

It should come as no surprise to anybody that LEGO Jurassic World fits in the latter category. Despite spending ten years developing LEGO games, Traveller’s Tales still seems to lack enough control over its LEGO engine to be able to produce licensed games in a rush. This title is a simple copy/ paste job from previous LEGO games with a new coat of Jurassic paint. But it doesn’t do a good job with it. Key scenes from the movies are completely missing (such as Timmy being launched from the 10,000 volt fence after Dr. Grant pretends to be fried, and Nedry making fun of Dodgson). This is not to mention the brutally ineffective retelling of the new Jurassic World movie which honestly feels like Universal did not divulge much of the movie to the developer, as half of the scenes take place in different locales than the movies and rush to get the story done.

The sound work in LEGO Jurassic World is another thing that lets this title down. All of the dialogue was stripped straight out of the movies, so get ready for your fill of VHS quality sound for the older movies (for those too young to remember VHS, think of what an iPhone speaker sounds like when a friend is sitting on your phone, and you get the idea). This loses a lot of the humour often found in LEGO games as we deal with a lot of the seriousness that surrounded much of the dialogue found in Jurassic Park, while the LEGO characters goof around, taking the dialogue completely out of context. But I will give TT points for including the infamous Ian Malcolm laugh from the helicopter trip at the beginning of the movie, and some more for making it family friendly by altering the death scenes so kids can play too. 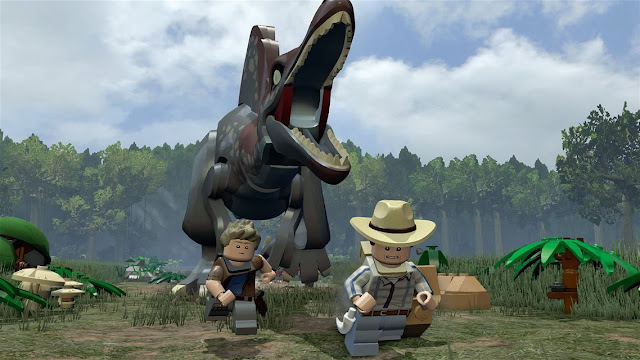 It might sound like I am being too harsh on LEGO Jurassic World, after all it is just another LEGO game, and this formula works, right? Well, that is exactly my point. Between the beginning of 2013 up until this release, we’ve been subjected to 11 LEGO games across all platforms, with another two titles releasing later in the year (LEGO Dimensions being the most ambitious title yet). This has caused some severe over saturation of the IP, and while LEGO is awesome, when Ubisoft are criticised for releasing one or two Assassin’s Creed games a year, it seems funny that TT are able to get away with the sheer number of titles it chuns out every year.

There’s no way the developer could possibly dedicate enough time to make sure each game works properly when it’s churning out this many, and so it should be no surprise that Jurassic World is a glitchy mess, especially in co-op. For example, while playing with a friend, I took control of Muldoon, who was tracking down an item when my friend, as Sattler, pulled a switch and activated a short cut-scene. When the game came back to the action, the item Muldoon was tracking completely disappeared and forced a reset of the level. At another point, we summoned a T-Rex and a Triceratops for some dino smashing fun, only to discover that once we both switched to the dinosaurs, we couldn’t switch back to the human characters, forcing us to turn the game off completely and restart again. While LEGO games have always had their glitches here and there, they become incredibly prevalent in Jurassic World, particularly as I progressed further through the game.

The variety in the levels is rather poor as well. I understand that humans were running away from dinosaurs a lot in the movies, but I don’t remember the sheer number of chase scenes the game forced me to endure as I played through all four movies. Almost every second stage had some sort of chase scene in it, and it made earning a 100 per cent completion truly irritating. Most of these chase scenes involved the LEGO characters being in no particular danger at all as they were being chased by various dinosaurs, but the most frustrating aspect was the fact that the action is shown front on, making it impossible to see what studs or collectibles are in front of the characters. Occasionally the scenes shift to side on, but not for long enough for anyone to particularly enjoy the collect-a-thon that is so integral to the LEGO experience. 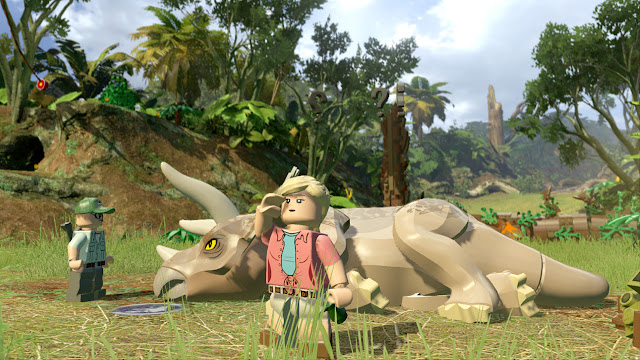 Related reading: For a look at how Minecraft clone, LEGO Worlds, is shaping up, check out Nick’s preview.

Though I have plenty to complain about with LEGO Jurassic World, it’s because I have spent the last number of years playing through each of them with family members. Most of my platinum trophies have occurred thanks to LEGO games. Chances are I will be getting a platinum in this one too, as the game functions well enough for me to somehow enjoy myself despite all of its irritations. In both single player and co-op, there’s still fun to be had, and most people play the LEGO games for the fun factor. You’ll find nothing ground breaking in LEGO Jurassic World, but it is so rushed that I can only recommend looking at one of the many other LEGO games out there unless you’re a massive fan of Jurassic Park.