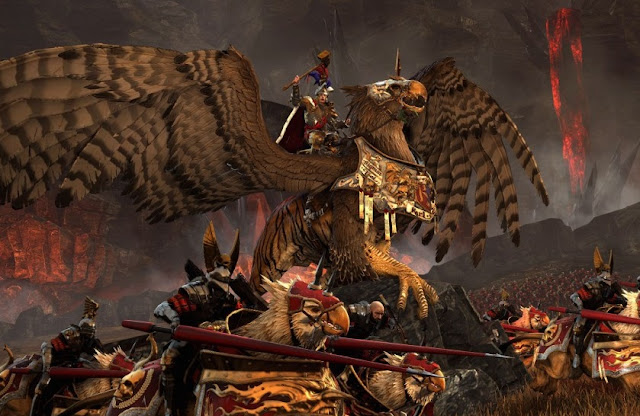 SEGA has announced that the first full in-game trailer for the hotly-anticipated Total War: Warhammer game will be released on Friday. To ramp up anticipation for that event, the publisher has launched a new series of mini-trailers to show off some of the game’s units.

The first of these trailers takes a look at the Demigryph. These monsters are part eagle, part lion, and form an elite cavalry that the humans use to take on their enemies. The trailer itself shows some early production work on the unit, as well as some of the art from the Warhammer game that inspired it.

Total War: Warhammer is a game I am greatly looking forward to. I grew up playing games like Shadow of the Horned Rat and Dark Omen over and over again, and it has been quite a while since a developer has created a Warhammer Fantasy game around that kind of RTS theme. Total War games are all extensions of the kind of strategy that drove Shadow of the Horned Rat and Dark Omen, so as far as I’m concerned, it’s a match made in heaven.

Related reading: My ten favourite games ever (including Shadow of the Horned Rat).

Fingers crossed The Creative Assembly have an interesting narrative to drive the strategy action. I guess we’ll get a better sense for what the game will really look and feel like on Friday, but in the meantime the trailer below is certainly whetting my appetite.

If you’d like to see more of these trailers, and the in-game footage trailer on Friday, SEGA is encouraging people to subscribe to the YouTube channel.