It looks like Apple is pulling any games it can find that feature the Confederate flag from its App store. But we’re not talking about racist games that heroise the flag or anything like that. We’re talking about historical wargames about the American Civil War that need to use the symbol to provide historical accuracy.

The games that have already been pulled include Ultimate General Gettysberg, Civil War 1863 and Civil War II: 1862. Furthermore another developer, that has had a Civil War-themed tower defence game, has reported on his Facebook page that the game was removed for “offensive content”, explicitly being told by Apple that the offensive content is the Confederate Flag. Screencap below: 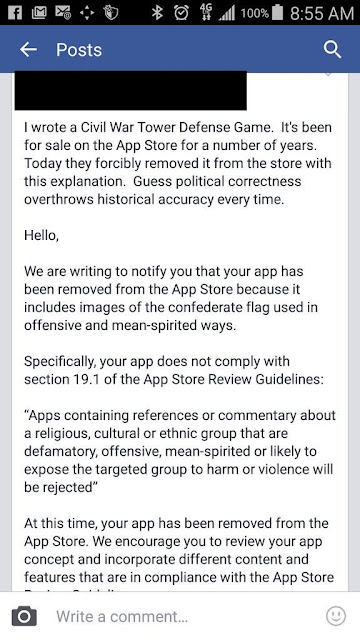 Apple has a history of blocking games that could be seen as politically motivated, and has blocked historical games in the past for using real nation names and flags. Eventually it saw the insanity of that rule and now there are plenty of historically authentic games available on the App store. However, the Confederate Flag has become a very sensitive symbol in the last couple of days, following the shocking massacre of a church filled with black people by a white supremacist.

There have been demands to stop flying the flag over government buildings in the south USA states, and this site isn’t really the place to debate that. But…

Representing the Confederate flag in a historical wargame isn’t political. It’s history. It’s like expecting game developers to represent Nazi Germany without using a swastika on red background for the flag. It can be done, but for those developers gunning for historical authenticity (which is a goal of many strategy games), is loses something in the omission. Putting such an icon in a wargame isn’t glorifying it. It’s simply representing two sides of a conflict that actually happened as it happened.

Or for another example it would be like banning history text books on World War 2 because they mention Auschwitz. Hopefully Apple sees through the insanity sooner rather than later and these games are allowed back on sale. This move by Apple is ridiculous, frankly.

Maxim Zasov, the CEO of Game-Labs, the developer of Ultimate General Gettysberg, also confirmed that its game was pulled from the App store for featuring the Confederate flag, and provided us with a statement:

We accept Apple’s decision and understand that this is a sensitive issue for the American Nation. We wanted our game to be the most accurate, historical, playable reference of the Battle of Gettysburg. All historical commanders, unit composition and weaponry, key geographical locations to the smallest streams or farms are recreated in our game’s battlefield.

We receive a lot of letters of gratitude from American teachers who use our game in history curriculum to let kids experience one of the most important battles in American history from the Commander’s perspective.

Spielberg’s “Schindler’s List” did not try to amend his movie to look more comfortable. The historical “Gettysburg” movie (1993) is still on iTunes. We believe that all historical art forms: books, movies, or games such as ours, help to learn and understand history, depicting events as they were. True stories are more important to us than money.

Therefore we are not going to amend the game’s content and Ultimate General: Gettysburg will no longer be available on AppStore. We really hope that Apple’s decision will achieve the desired results. We can’t change history, but we can change the future.

Many thanks to Twitter follower, @HistoricalGamer, for the tip-off.