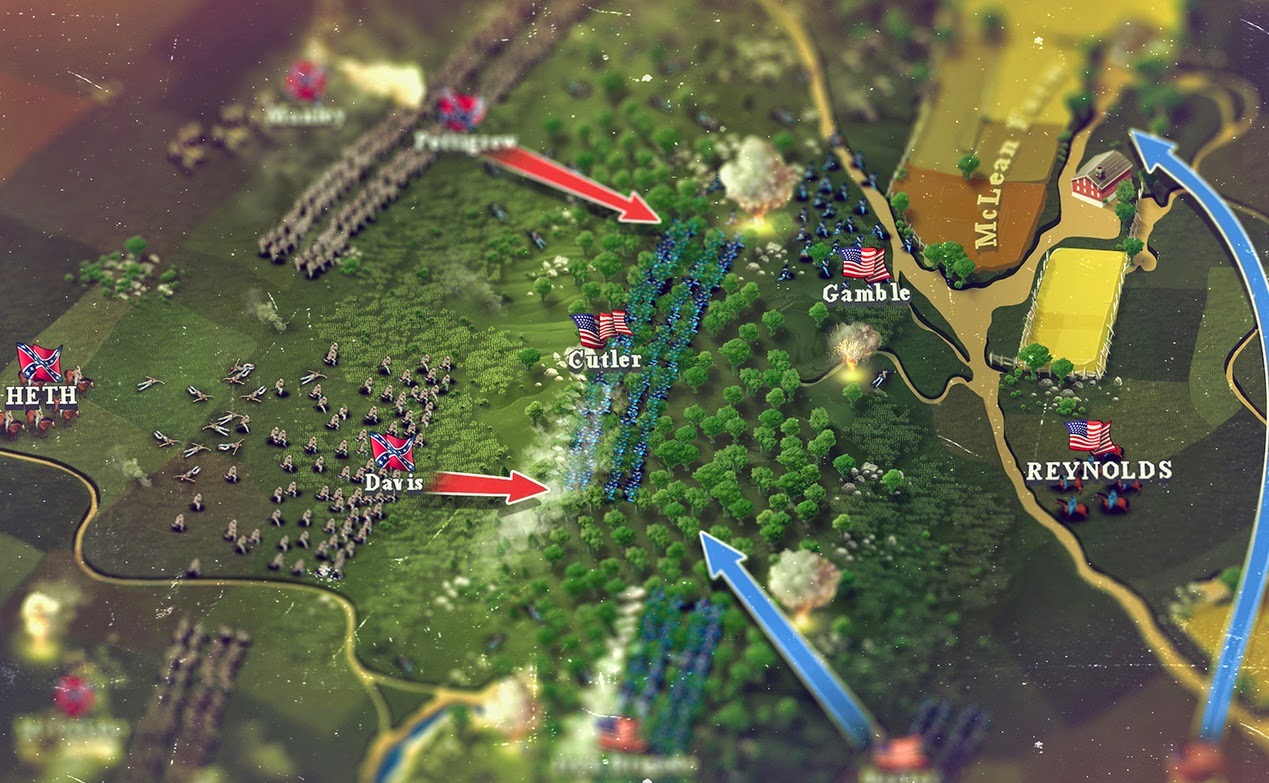 Back when I was a youngster I had a serious fascination with Napoleon, and particularly the military strategy of Napoleon’s campaigns. I bought and painted Napoleonic miniatures to play tabletop wargames, even as my friends were more attracted to the ‘cool’ Warhammer and Warhammer 40,000 tabletop games. And I spent more time than was healthy playing games like MicroProse’s Fields of Glory, and Empire Interactive’s Wargamer: Napoleon 1813.

How is this relevant to Ultimate General: Gettysburg, I hear you ask? Well, of all the wargames I’ve played since (including the likes of Total War: Napoleon), it is this the game that has given me the most powerful nostalgic rush of playing those Napoleonic titles as a kid. It might be set in a very different period of history, and one I don’t know as well as I might like, but the core mechanics of the game are so appealing that I imagine I’ll be spending a lot of time playing this into the future.

Ultimate General: Gettysburg is easy enough to learn. The tutorial is, in fact, over in just a couple of minutes, because controlling units doesn’t take much more than tapping and dragging unit icons where you’d like for them to travel. Tapping on an enemy unit will cause the unit to engage with that enemy, and there are cavalry, infantry, and cannon units to control. Battles play out in real time, but it’s a slow, ponderous kind of real time strategy game, giving you plenty of time to think on your feet and command large numbers of units at a time. 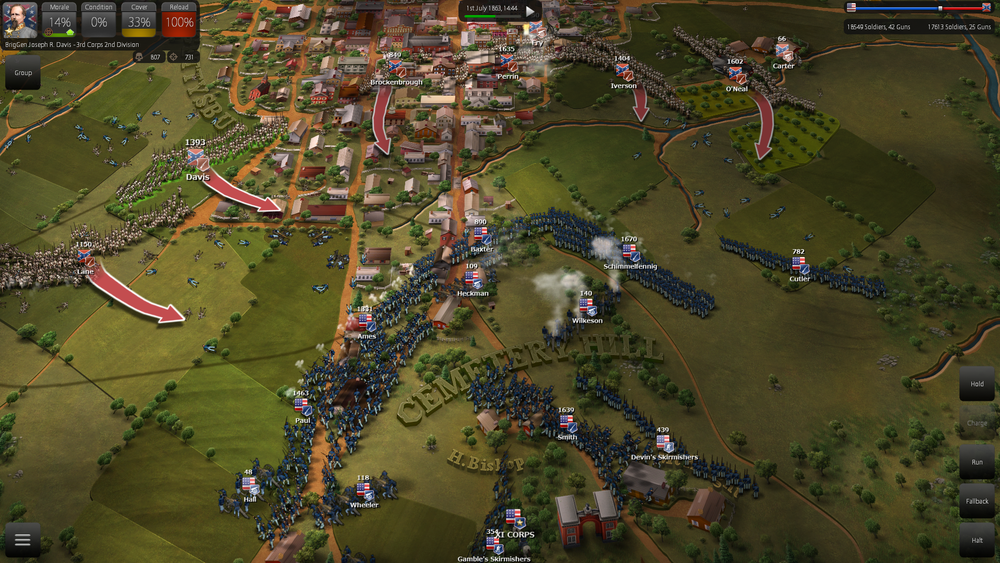 It sounds simple, but within that basic framework, there’s a lot of strategic depth to dig into. Terrain plays a role, with units firing down from high enjoying a significant advantage over the poor souls underneath. Units can be commanded to charge a position and engage in hand-to-hand combat to try and take that position quickly. Morale can cause a unit to break ranks and flee, though commanders can be used to improve morale. Units get fatigued over time, which makes them less effective combatants. As time progresses reinforcements will arrive on the battlefield, which can be moved to the front lines to shore up weaknesses in the line. And there are key locations that need to be captured to secure victory, which focuses the conflict in certain points of the battlefield.

It’s also not an easy game, with an enemy AI that is focused and intelligent. Because the game has relatively few scenarios and maps to play across, that AI knows how to exploit it to its benefit, making effective feints, clever use of fast scout units to harry your lines, and timing its moves well to capitalise on the arrival of reinforcements. The AI benefits your own forces, too, with friendly units happy to look after themselves after you’ve given them general orders. In other words, you’ll be able to issue a series of movement commands to a flank, then move over to focus on the other flank secure in the knowledge that if the units that you’ve just issued commands to won’t stand around like fools if they run into enemies.

The end effect is that the game has a solid flow to it, with units advancing and retreating in a realistic fashion that mirrors the kind of flows you’d expect to see in a real battle. The game rewards an abstract, but realistic application of real-world military strategy, and punishes impulsive or limited strategic thinking. The battles look like those old Napoleonic games that I loved so much too, and that’s not a criticism by any means. Watching forces moving around a battlefield in unit blocks has a pleasingly regimented aesthetic to it. As units suffer casualties bodies litter the battlefield, and while this is a grim way representation of the flow of conflict, it’s nonetheless effective in showing where the fierce fighting happened and, equally importantly, why the fighting was especially fierce at that point.

Any good wargame should provide a sense of historical authenticity to the player, and helps enlighten them about the military strategy of the era. Gettysburg achieves that with clear authenticity and understanding of the tactics of the era, and while the iPad doesn’t lack for quality wargames on it, this is another one worth adding to the playlist.