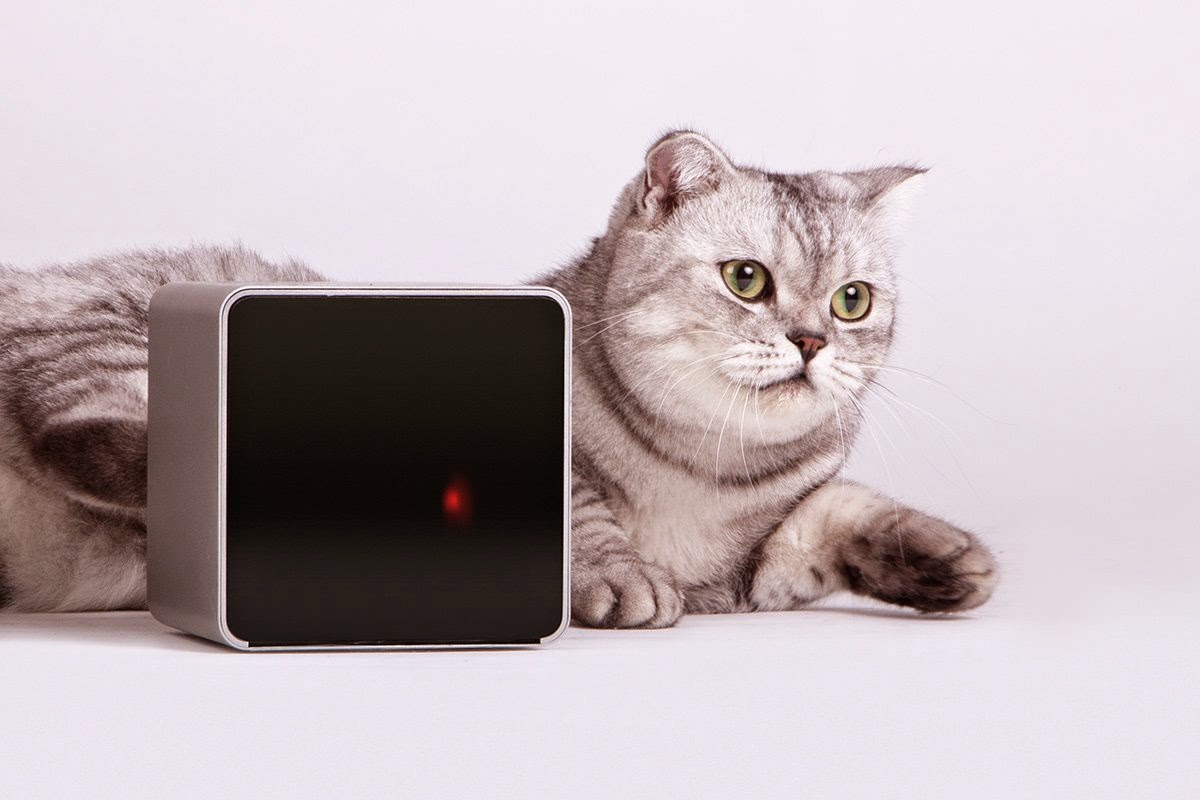 Ever feel like there was a lack of cat videos and images on the Internet? Petcube could very well be the solution to that problem for you. Now, I say this with a grin on my face, since we all know that the powerhouse that is YouTube was built on adorable cat videos. Petcube is hoping to fill a void by providing pet owners an opportunity to stay connected with their own beloved pets any time of the day, while creating a broader community for people who adore watching other peoples’ pets in real-time.

The idea is actually quite simple, which means that execution here is the key. The Petcube lives up to its name, providing a simple grey box with a black front panel that is really not much bigger than the average mug of coffee. It has a built-in microphone, speaker, 138 degree wide-angle camera and a laser pointer all stuffed in its cubical form.

Setting the unit up is actually really easy – you are just plugging it in. We put it on the table in my living room. Why? Because our living room is quite literally the hub to the rest of my house. My house that has three kids and five cats, so that hub sees a lot of activity. Yes, five cats. It’s a big house – one cat for each of us. No judging, they’re adorable. Moving on… 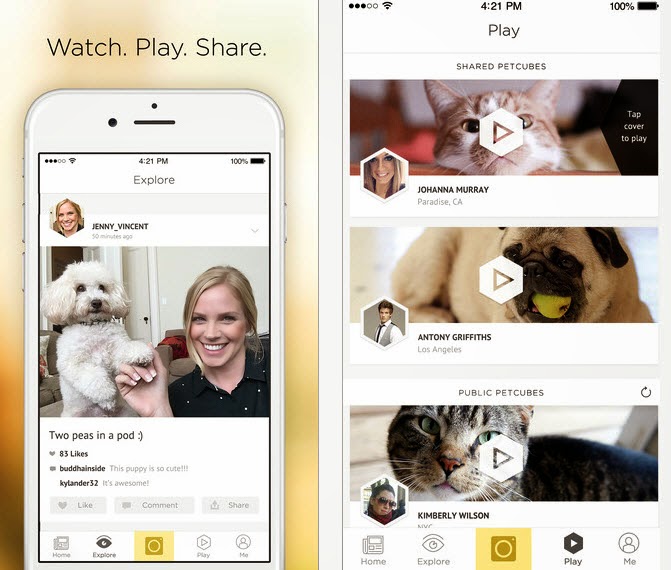 The second component to getting up and running is the app itself, which is available for both iOS and Android. We are an iDevice family, so it was tested with iPad 2 and 3, and an iPhone 4 and 5. The app installed easily enough, and once it had the first step was creating an account. You can do this via Facebook or email, but I went the email route while my son tried Facebook. Both connected just fine. You then use the app to sync to the physical device and the Petcube is ready to go.

Now since my son and daughter actually set this up before I had a chance to get my hands on it (they were a little excited), it was tethered to my daughter’s account. That was fine as she was able to send an invite to my son, wife and I as soon as we had our respective accounts created. From there, it was as easy as selecting her Petcube and pressing the play button. Taking control of the session gives a countdown timer of thirty seconds to whomever is currently in control of it – only one device can control the unit at a time.

Once you have taken the reigns with your device, a handful of options present themselves, and some do work better than others. The camera itself shows a nice picture, but your Internet connection and device speed will greatly impact your video performance. For example, the iPad 2 or iPhone 4 do not process the video nearly as fluidly as the iPad 3 or iPhone 5 do. Additionally, trying to use my phone on the go produces blockier image than what I see when I am at work on our very fast Internet connection. It would be nice to see this optimised a bit better, but considering how good things look with newer devices and better connections, this feels more like an issue with the software (or the realities of streaming video in general) than the hardware itself. It is worth noting that while the angle of the camera is solid, it is a fixed camera. The images that it takes are pretty crisp, but there is no option for recording video on your device. It also comes with a speaker and microphone that allows you to talk to your pets from a remote location. These do not work quite as well. The biggest issue I noticed was that there seemed to be occasional bursts of feedback when one of the kids or myself talked too loudly, causing a brief squelching sound in the living room that no one really appreciated. In more controlled environments with less background noise (and therefore speaking less loudly as well), the audio quality was much better. Probably my favourite aspect of the Petcube is the laser pointer. You use your fingertip on the touchscreen to navigate the laser around the room. Petcube is using a 5mW 3R laser, which should not prove harmful to human or animal eyes should the beam stray across an unsuspecting face. The laser itself showed up great in our living room floor and the cats had a blast chasing it around. It is not uncommon for one of my kids to simply pick up their iPad on their way to their bedroom, only to see them playing with the cats a few minutes later. I also had to remind my son that this was probably not proper use of his school issued iPad during the middle of one of his classes.

While the power cable is about four feet long, I do wish there was an outlet free option. It might have been nice to offer a battery option that could be charged for those who want to perch this in a location that does not have easy outlet access. I did not have this problem in my own environment, as my living room actually has an outlet on each of the four walls, and the table we set it on is about two feet from an outlet, but I can see where that would be a concern for others.

Getting away from the hardware, there is the application itself. Here is where Petcube is attempting to establish a sense of community. While I do not think YouTube has anything to fear, especially since you cannot actually record video, on the plus side there are some privacy options you can switch between on the Petcube. These range from only allowing you access, only allowing those you have invited access, and keeping your device open to the public. I have seen a wide range of environments, from living room to animal shelters, and it is indeed engaging to watch other animals and even interact with them via the laser pointer and microphone options. That being said, I have mine restricted to invitation-only. I don’t need random people looking around my living room or yelling at my cats when I’m not home. 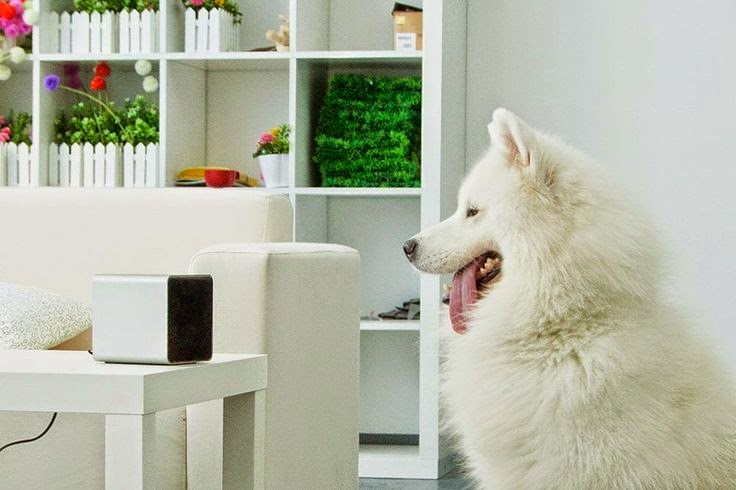 From a practical standpoint, the Petcube is a way to monitor and interact with your pets. Digitally Downloaded is a site focused on gaming – but really, why should humans have all of the fun? Pets want to play too, so I found the Petcube an entertaining option for doing just that when I have to be away from the home for an extended time (which is pretty much daily, since I work). Some design concessions likely had to be made to keep the price at $199 while still making a profit, which is understandable. The app itself seems like the next part of the package that could be expanded on, whether it is supporting video recording, allowing multiple people to connect to the device at once or even perhaps setting up the laser pointer to move around on a programmable circuit. So far however, the early returns have been good and the entire family (kitties included) have been enjoying the ability for us to interact with them, even when we are not home.

You can find the Petcube here